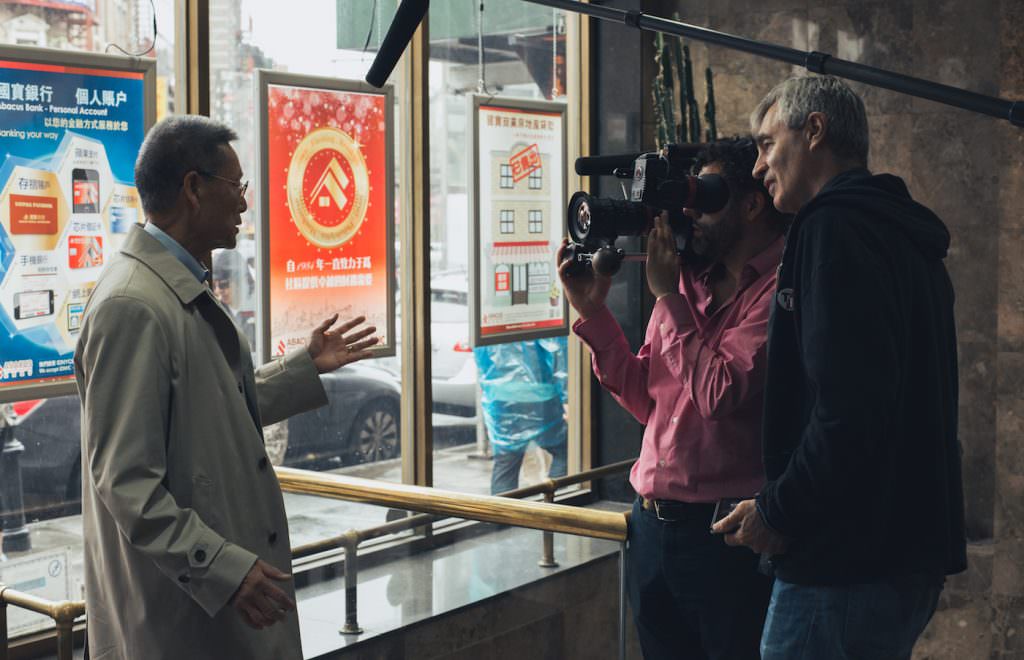 Chicago filmmaker Steve James has a fraught history with the Oscars dating back to 1994, when his critically acclaimed box office hit Hoop Dreams failed to get nominated for an Academy Award. The snub outraged late movie critic Roger Ebert, prompted an Entertainment Weekly expose and inspired changes in Academy voting procedures. Cut to 2011, when James made The Interrupters, a gritty group portrait of reformed gang members fighting to stop murders on the streets of Chicago. “We were pretty sure that one would get a nomination and it didn’t even make the short list,” James laughs.

James finally get his seat at the table come Oscar night courtesy of Abacus: Small Enough to Jail. The film centers on 78-year old Thomas Sung and his daughters, whose Chinatown bank became the only Manhattan business prosecuted for fraud in the wake of the 2008-2009 housing meltdown. James says, “We jokingly call this the little film that could, because Abacus was made on a very modest budget. Within the doc branch, people aren’t really influenced by big ad campaigns when they make their choices and clearly, there was a lot of love for this film.”

James learned about the Sung family in 2015, deep into preparation for his 10-part documentary series “America to Me” that debuted at Sundance in January. “My producer friend Mark Mitten, knew the Sung family and suggested I make a film about them. I went to New York for three days, figuring if it’s not for me, Mark could use my footage and find somebody else.”

By the second day, James was hooked. “I didn’t know much about Chinese American experience in this country so I had this stereotype expectation that the father would be the indisputable patriarch that everybody deferred to. Nothing could be further from the truth.” On hand for a clamorous dinner at a Chinese restaurant, James observed argumentative, funny, stressed out family members, each with a passionately argued point of view. He says, “It was everything a filmmaker could ask for.”

Teamed with DP Tom Bergmann and soundman Danny Nidell, James spent the summer in New York City talking to Abacus customers, who referenced It’s a Wonderful Life in in describing Chinn as the “George Bailey of Chinatown'” Keeping tabs on the trial proved more challenging. Barred from filming inside the courtroom, James recruited courtroom artist Christine Cornell to depict the proceedings with storyboard-like renderings. He then hired voiceover actors to read court transcripts in character as lawyers and witnesses. Eventually, PBS’ revered investigative team Frontlines partnered with James and New York County District Attorney Cyrus Vance Jr. agreed to go on camera. James sauys, “When Frontlines joined the project, we got more clout and I think we induced a little bit more fear: if Vance did not participate, it would be noted rather significantly in this PBS that he refused to cooperate.”

In the film, Vance explains why he went after Abacus Federal Savings Bank for relatively minor fraud perpetrated in 2008, when the family itself reported misconduct by one of its loan officers. “It was clear that [Vance] wanted to generate publicity for this indictment,” says James, who includes footage of Thomas Sung and his daughters being “perp-walked” in manacles at a press conference. “I think Vance wanted to be the guy who brought down a bank. But this was low level fraud that had nothing to do with credit default swaps or toxic loans. Like [reporter] Matt Taibbi says in our film, picking on a bank between a couple of noodle shops in Chinatown seemed like a pretty easy target.”

“Abacus” culminates in 10 nerve-wracking days of jury deliberation as Thomas Sung and his daughters await a verdict on 184 felony counts. After bearing witness to the family’s ordeal, James finds it significant that Mr. Sing emigrated from China to America when he was 16 years old. “Too often people who fear immigrants forget that the very things we define as American values really comes from the immigrant dream,” James says. “The Sung family’s integrity, the things they stand for, what they’ve tried to give to this country and their community — I can’t think of a better example of the American Dream.”