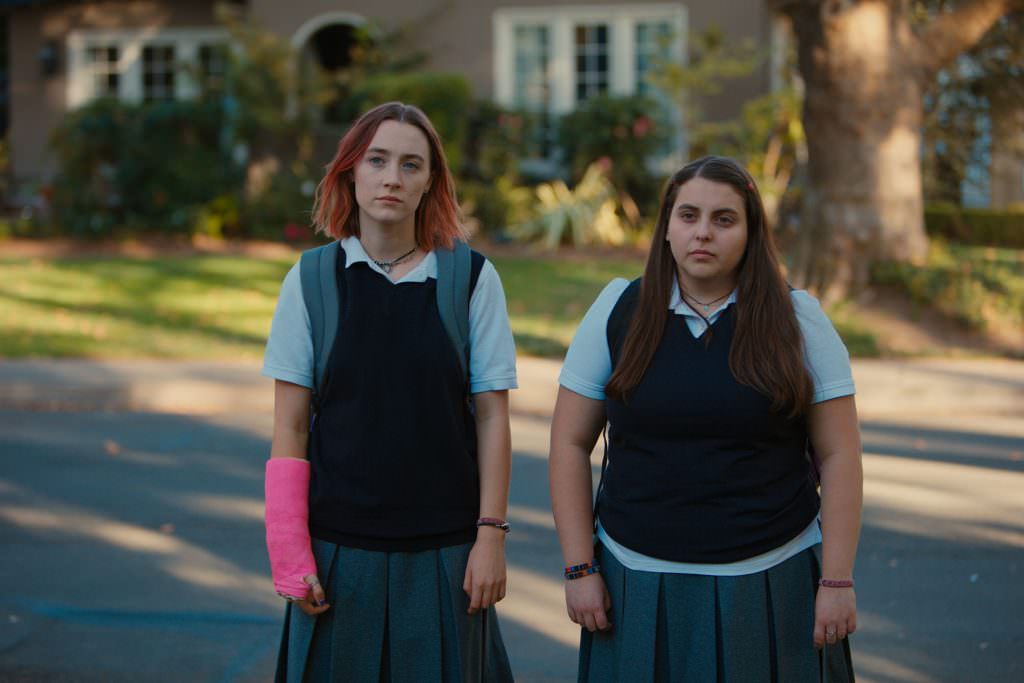 It’d be an understatement to say Lady Bird has taken the country by storm. After quietly positive bows at Telluride and TIFF earlier this year, Greta Gerwig’s directorial debut has gone on to become one of the best-reviewed film of all time on Rotten Tomatoes (until a certain someone got the score lowered from a perfect 100 to a near-perfect 99), score five Oscar nominations in a heavily competitive year and stack up a $40M+ box office against a shoestring budget. “I can’t tell you how many times people have told me, ‘I was Lady Bird!’,” Lady Bird costume designer April Napier told The Credits. “And it’s like exactly, Greta found a way to tell a universal story in a really personal way.”

That story, of a 17-year-old girl’s coming of age in Sacramento (“the midwest of California”), has made for one of the year’s best films, and easily one of its most distinct. Gerwig makes hay of its sun-bleached early aughts setting, somehow succeeding in achieving both a dog-eared specificity and an undeniable relatability both in the character of Lady Bird herself (the Oscar-nominated Saoirse Ronan) and in its charmingly square set dressing. ”It was really fun but it’s kind of painful, that period,” Napier says, conjuring up images of Von Dutch hats and foam flip-flops. “I remember thinking a few years ago that ‘Oh man, the ‘90s were so awful.’ But now they’ve been commodified, it got reclaimed. Certainly that’s going to happen with the 2000s as well, but when you’re in the beginning of that, it’s kind of painful. Because it seems really unattractive. I mean, that was such a painful period.”

The awkward, not-quite-vintage setting is in perfect step with Lady Bird’s journey of self discovery over the course of the film, but it also provided a unique challenge for Napier, who was tasked with representing an era so rarely seen in contemporary film. “I feel like people know the ‘70s and the ‘60s and the ‘80s, and they also know the 1920s and the 1870s,” Napier explains. “These are all period things. But 2002 is in fact a period, even though it’s only 16 years ago, things were so different. And I think the main thing about it is the internet. Sacramento is always a little bit behind. It’s not like Los Angeles, and it’s not like San Francisco. It’s central valley, surrounded by farmland. So I almost approached it like it was still the late ‘90s. Because there wasn’t internet, everyone had late access all the time, to information. It’s a more genuine, kind of authentic journey and struggle in trying to find her footing.”

Without many current cinematic references to draw from, Napier turned to creating her own lookbooks stuffed with female style icons she imagined Lady Bird would have been enamored of. Patti Smith, Kathleen Hanna, Sonic Youth – ”I always felt like Lady Bird was a little more punk rock,” Napier says – as well as Chloe Sevigny’s looks in Larry Clark’s infamous Kids helped inspire her initial pallette. She pulled pages from Delia’s catalogues and Sassy Magazine and watched the films the character might have seen and loved during her high school tenure (Bring it On and 10 Things I Hate About You specifically), but it was Gerwig’s careful record keeping and specific point of view that went the furthest to help craft the film’s style landscape.

“Greta’s such a great collaborator that when she saw my first lookbook she just went, ‘That’s her! That’s her!’ But because she brought me a treasure trove of photos from her in her high school years, I used some of those as inspirations for Danny (Lucas Hedges) and some of the other background characters. She brought her journals and she brought her yearbooks, it was so amazing, such great research because it’s real research it’s not like stuff from magazines and stuff. You have real people, in their real situations in their real clothes. The whole thing was important to be really real because of her voice, the whole story was very authentic.”

Naturally, Gerwig’s close attention to the emotional thread of each wardrobe decision helped make Napier’s job instinctual. “Greta wrote it so purely and so clearly that you could taste what she needs to be wearing in each moment,” Napier says. The screenplay is littered with references to clothing, and punctuated by those gorgeous, excruciating shopping trip squabbles. In one particularly impactful scene, Lady Bird retreats from her boyfriend’s home and into the family car, only to have her mother immediately notice she’s wearing a jacket that doesn’t belong to her. “That’s a wonderful scripted moment,” Napier says.“That era is the era of Juicy Couture, those horrible velvet tracksuits. And of course Lady Bird doesn’t have one of those. But she’s separating herself from her family, trying to pretend to be something else.”

Gerwig’s decision to centralize much of the film inside the walls of a local thrift store provided Napier with plenty of opportunity to play with eras and styles outside of the drab aughts: “When she’s looking for her Thanksgiving dress and they’re in that thrift store, I thought, ‘What would Lady Bird think Jackie Kennedy would wear?’ Because she’s trying to appeal to this classic, moneyed family that live in the fabulous 40s. And the other dress that was very important was her audition dress, that kind of black knit ‘70s dress. She would wonder ‘What would Bob Fosse put in All that Jazz?’ So we selected that one.”

But for all Lady Bird’s costume changes, the film’s most beguiling constant is the Catholic school uniform, an outfit defined by rigidity and sameness that Gerwig became intimately familiar with during her tenure at private school. Napier says Gerwig made a point to underline the importance of accessories – the only expression of personal style students are allowed to bring to their outfits.

“Lady Bird wears those mary jane Doc Martens, which Greta requested,” Napier tells The Credits. “And then she wears those kind of vibrant socks or striped socks or argyle socks. And then of course she has her jewelry she wears, her indie music layering of stuff. Then she wears things a little more oversized, a little boxy and more tomboy-like.” In contrast, the wealthy, mush-mouthed Jenna (Odeya Rush) makes a point to raise her skirt hems to eyebrow-raising heights, accessorizing with little more than a hair ribbon and a perfectly preppy Tiffany Paloma bracelet. Still, it was Julie (Beanie Feldstein) that prompted Napier to make her most out of the box costuming decision yet. “We just put her in, I hate to say it, Sketchers,” Napier says. “I’d always thought, I’ll never use Sketchers in anything I do but I thought, ‘I think this is the right thing.’ Sometimes you just have to make a decision that’s so horrible, but it’s right!”

As is the nature of the coming of age genre, Napier was tasked with tracking Lady Bird’s emotional evolution through her wardrobe, moving from costumey vintage pieces to freer, more singular choices later in the film. “She has the one prom dress where she’s at the point where she’s kind of free,” Napier says. “She says ‘F*ck it, I’m going to be who I am. I’m not going to wear one of these awful 2002 dresses. I’m gonna wear something that is really Lady Bird.’ And then I feel at the end when she’s wearing that little boy’s blazer and that stripey shirt in New York, that I feel like that’s the place where she declares, ‘My name is Christine.’ She finally found a place where she was comfortable, where she fits in. She gets to the city and she found an outfit that makes perfect sense there.”

Throughout the production, Napier and Gerwig kept authenticity at the forefront of the production, a focus that prompted Napier to largely source costumes from vintage and second-hand stores. “I’m very reluctant to buy anything new and age it down because I feel like you can never truly get that patina or that authenticity or truth unless a human being has been in it, and worn it. You can see that it’s real, it’s always been really important to me.I just think it rings truer, it falls on the body differently, and I think that the actors really appreciate it because they know it’s a real thing from the era.”

As a result, Napier spent pre-production poring through vintage shops, Etsy (“the world’s best thrift store”) and swap meets along the southern California coast. “Myself and my department, we’re always conscious of making things be real. It was the reason we shopped only vintage stuff and the reason we wanted things, sometimes things are ill-fitting but that’s also the way the world works. It was a really guiding light for us, to make sure we were telling the truth.”

Perhaps it’s that same truth that’s allowed Lady Bird to tap into the cultural zeitgeist in the months since its release, the quality that’s allowed countless viewers to see themselves in the film despite their multiplicitous backgrounds. “I feel like we’re in a moment right now, and I keep telling Greta, her voice is a new frontier, new narrative for cinema,” Napier says. “I feel like it kind of began with the Oscars last year when white people handed the Oscar to Moonlight. We’re witnessing a cultural shift right now, people don’t want big fake stories. They want real stories. And I think that’s why our film is resonating, that’s why Get Out is resonating, people are ready. It’s been a really hard couple of years with politics and what’s happening to the earth. People don’t want to hear the big, fake things anymore, they want real voices. What they really want to hear are real authentic stories.”