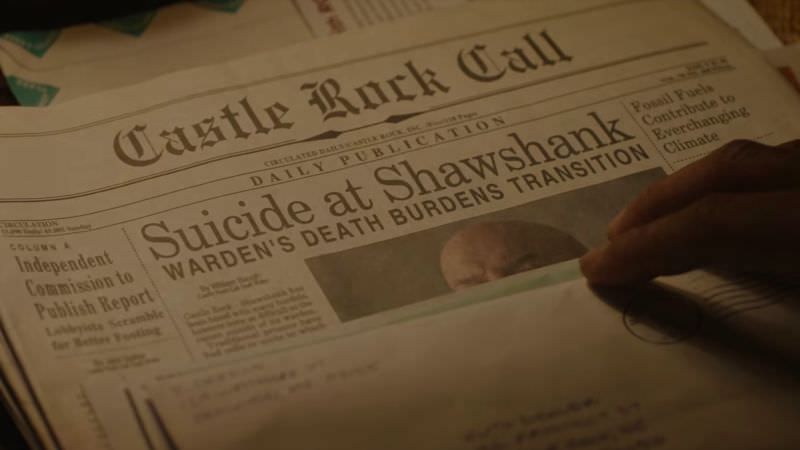 Stephen King is continuing his entertainment reign with Castle Rock set to launch on Hulu. The plot is incredibly unclear, but it’s the first trailer is an intriguing mash up of King’s greatest hits. Everyone looks very on edge, and it’s basically a slideshow of awesome actors, so we’re hooked.

André Holland plays a man who goes home to Castle Rock after receiving a call from Shawshank prison that seems to set the story in motion. It looks like he’s actually been to Shawshank, because we see him talking on a prison phone across from Bill Skarsgård. Hello. That has to be important, right? Skarsgård is an incredibly talented actor and would do well in any role, but he’s most famous for his recent turn as Pennywise the clown in IT.

There’s a flurry of disturbing images like a woman jumping to an unknown fate and blood flowing down a bathtub drain. Someone begins to worry that, “something bad is about to happen” but too late! It’s happening, says Sissy Spacek. Interesting. Spacek, of course, starred as the telekinetic Carrie.

J.J. Abrams executive produced the project, and it looks like he brought on Terry O’Quinn from Lost. A newspaper headline at the beginning of the trailer reads, “Suicide at Shawshank – Warden’s Death Burdens Transition.” It has an image of a man’s forehead that looks a lot like O’Quinn, but he’s definitely alive at some point in the story.

There’s also a quick flash of Jane Levy (Suburgatory), Melanie Lynskey (Rose Red), and Scott Glenn (The Hunt for Red October). Sure, we’re curious about the plot, but we’re most interested to see if the King veterans will play new characters or connect back to their previous roles.

Castle Rock will be available for binging this summer on Hulu.