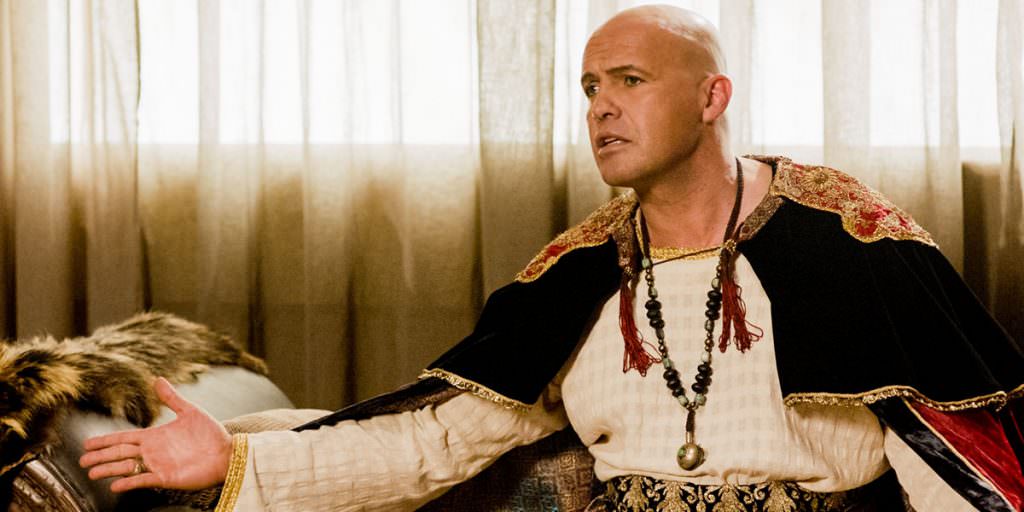 Billy Zane on Playing the Evil King Balek in Samson

Samson’s tyrannical King Balek is not the first time Billy Zane has played the bad guy. He is probably best remembered as the arrogant Caledon Hockley in the Oscar-winning blockbuster Titanic. And he played a villain in the thriller Dead Calm. But he also was a quintessential “cool dude” in Zoolander, and his roles have ranged from a singing lawyer (in Chicago on stage) to an ex-demon on Charmed. He talked to The Credits about Samson, Titanic, and dressing like a Biblical king.

Is it fun to play a bad guy?

It always proves entertaining in the end. It’s fun. It’s also an interesting challenge to mine the humanity within those characters so they can become that much more accessible; their human frailty, their folly. It’s important to make them resonate, to be tangible in a real way, making the hero’s journey that much more relevant.

King Balek’s relationship to his son adds a lot of texture to the movie.

Human behavior seems pretty unchanged through the centuries. If you took this story’s template it could be a mob boss or a family business. Inevitably you’ve got to know if your offspring are up to snuff and you’ve got some wild cards whose kind of hubris and ambition exceed their ability and often endanger the empire you’ve built. This is a familiar story and it’s when you can identify those hooks to have a more dramatic narrative, it becomes familiar and it resonates, and then the core themes of the story can also land. That relationship also allows you to enjoy the frustration of the king and his fate before the stones came down.

How did the regal, Biblical-era garb help you define the character?

The amount of metal for adornment was synonymous with the station so there was a lot of it. The king had the most hideous stuff I think; the crown was not comfortable, the various necklaces and breastplates and things. There was a lot of gear. It affected my posture. The line of the tunic and the weight of the belts and the bits promoted a posture not unlike the tuxedos in the period films like the high collar that would force one’s chin to be raised which led to assumptions of arrogance in the upper class. You literally look down your nose at someone because you can’t lower your nose so in this case there was something about the backbone and the gait and the way one walks with a long tunic and behaves and sits in a chair.

Since you brought up the high collar and tuxedo, did you have any idea that Titanic would have the long-lasting cultural impact that it has?

Not to the extent that it has. We knew we were making a good movie and the themes would certainly resonate, love and death are pretty operatic; always was, however, we had no idea that it would land the way it did. I’m always humbled by how that movie resonates and grows with time in terms of its impact as it touches a new generation every year.

You grew up in an acting family and in a great city for theater, Chicago.

I did, one of the best things about growing up in that city was the access to the arts and the Park District program. I would go not only to see my parents perform there but of tons of shows. We were fortunate that the schools had really robust theatre arts programs and the city had this incredible theatre scene at the time, at an all-time high when I was being inspired to pick a career path. The nation if not the world was looking to the Chicago stage, “Steppenwolf” with Mamet and Malkovich and Sinese was finding its legs and creating a lot of great new works, and the Goodman Theatre was launching national and world premieres and it really established a bar for neo-naturalism and excellence.

What do you want families to talk about after seeing Samson?

It’s a timeless story and he is a product of hubris, with lessons to learn. The metaphor of blindness and sight beyond the physical is really interesting and time-honored. And I want them to talk about the power of belief and faith in oneself; they’re all organizing principles for this story that families should talk about.