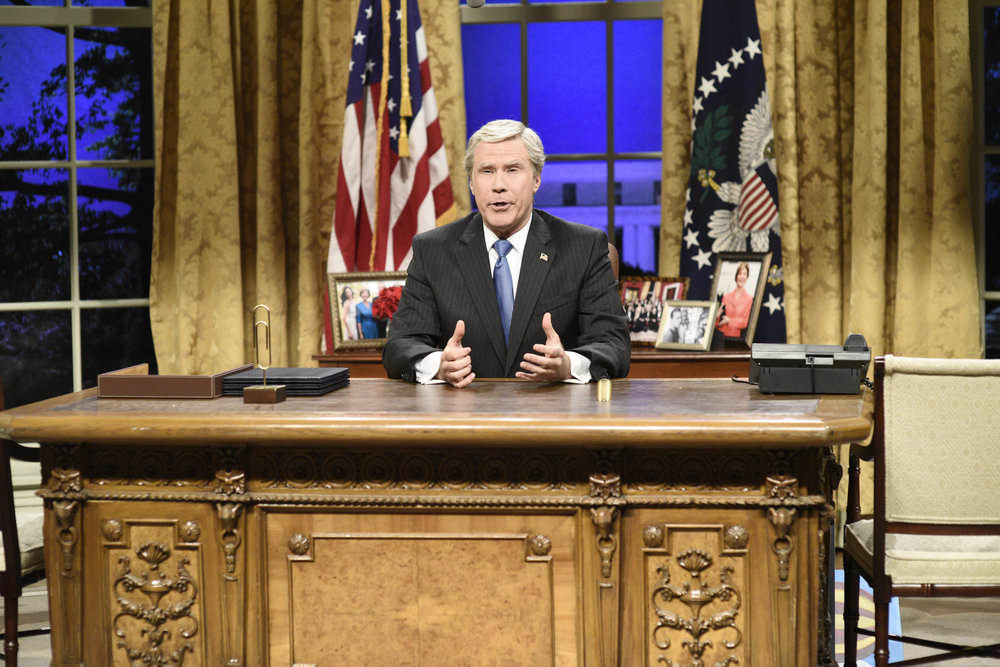 Will Ferrell Brushes Off His George W. Bush Impression for Saturday Night Live

One of the most successful SNL alums returned on Saturday to reprise his most famous impersonation. The legendary sketch comedy show is in a heyday with golden material coming out of the White House. Will Ferrell returned to remind viewers, however, that former President George W. Bush used to be at the center of the show’s punchlines.

Ferrell retired as a regular cast member in 2005, but has returned as a guest host four time since. He last reprised his role as George W. Bust in the show’s cold open in December 2015.

Alec Baldwin took a break this week from portraying President Trump. Baldwin has been a mainstay, even winning an Emmy for his performance, as the candidate-turned-President Trump. Darrell Hammond even returned on occasion during the election cycle to reprise his take on former President Bill Clinton.

Nostalgia has greatly improved Bush’s approval ratings. CNN cites the former commander in chief now holds a favorable rating among 61% of Americans. Ferrell seized the moment to remind the audience that although that number far surpasses Trump’s 40% approval, it’s significantly lower than 33% Bush held at the end of his Presidency. It was a clever and creative way to deliver the joke without involving Baldwin, who could use a break.

Ferrell’s comedic genius was on full display throughout the episode. He helmed clever evergreen sketches like a fatalistic flight attendant and a situational fighter pilot sketch (a lot of flying jokes this week). Ferrell also address the #MeToo movement and precarious social conversation that’s occurring with a clever men’s deodorant commercial and dinner party scene.

Ferrell reminded us why he’s the king of comedy and made us nostalgic for the SNL of the 90s. Next up for hosting duties is Natalie Portman on Februray 3 with musical guest Dua Lipa who opened on tour for Bruno Mars this summer. Another strong year for SNL is in full swing.