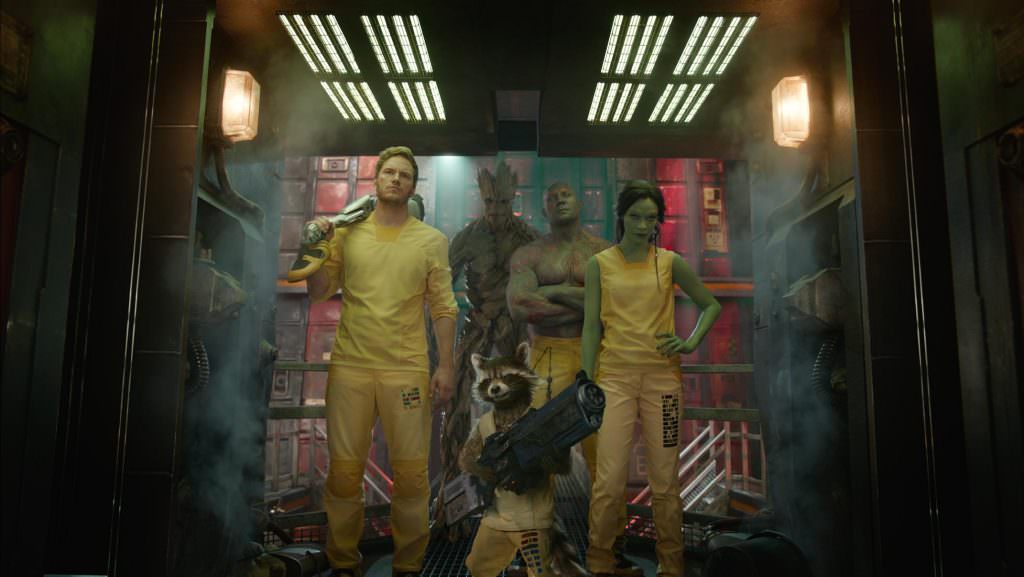 The Definitive Guide to the Guardians‘ Rap Sheets

Some people wear their heart on their sleeve, but the Guardians of the Galaxy wear their crimes on their pants. Reddit users recently picked up on an Easter egg that was so brilliant and harbored so much detail that director James Gunn joined in to comment. He even took time away from finishing a draft of Guardians of the Galaxy Vol. 3 to further explain the cool costume detail.

Remembering back to the plot of the first film in the series, Quill, Gamora, Rocket, and Groot find themselves imprisoned in the Kyln. The prisoner wardrobe consists of yellow scrubs with a unique pattern of colored lines like an intergalactic QR code. As it turns out, the markings are indicative of the crimes committed by each. Reddit users attempted to decipher what each color means. Quill’s acts are actually the shortest, while Rocket’s nearly extend past his pant leg.

Gunn noted that some guesses were off the mark while others were dead on. The color system was created by costume designer Alexandra Byrne based on a list of convictions written by Gunn. While he admits he hasn’t had the time to dig out the original correspondence, he remembers most of it.

“Rocket’s are mercenary activity, grievous bodily harm, arson (he blows up a lot of stuff), escape from prison, and, I believe, public drunkenness.

Quill’s crimes are penny-ante robbery, grift, criminal conspiracy (from his gang involvement with the Ravagers), and having sex with members of a royal family (consensual but on some planets considered an outrageous crime for someone from his caste).

Gamora keeps things simple with her long list of murders and assassinations, all at the behest of Thanos.

And Drax’s crimes are grievous bodily harm, murder, and every variety of destroying stuff you can imagine.”

Gunn does make a note that not every crime they actually committed is accounted for, just ones they’ve been convicted of. That could explain Quinn’s short list. Gunn’s Facebook is particularly interactive with fans so it’s always a good source of behind the scenes info. We love when design detail is actually functional rather than just aesthetic, and this one is a pretty cool idea.