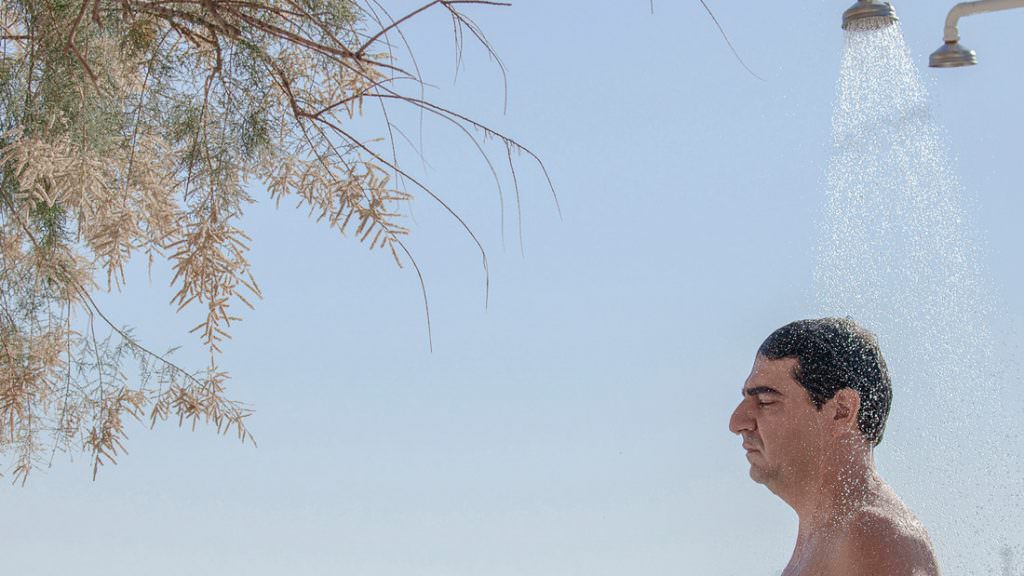 Sundance 2018: Writer/Director Babis Makridis on Exploring an Addiction to Sadness in his Surprisingly Funny Pity

Chatting with Greek filmmaker Babis Makridis is a little like being in one of his films. He’s dry, soft spoken, casually funny, and very smart. In his latest film, Pity, about a man who can only experience happiness by being unhappy, Makridis has delivered that rare treat—a story that doesn’t flinch at life’s paradoxes, absurdities and miseries, yet still manages to get a theater full of people laughing. No small feat there.

Makridis has the distinction of having his last feature, L, become the first Greek movie selected to compete at Sundance (it premiered there in 2012). That film, about a 40-year old man living out of his car whose loses job bringing the finest honey to another man, was as hard to classify as a lot of really good Greek cinema. You won’t be surprised to know that Makridis is friends with Yorgos Lanthimos, the writer/director of the itchy, surreal Dogtooth (on which Makridis was thanked in the credits), the deeply funny and sad The Lobster and The Killing of a Sacred Deer, arguably one of the most relentless films of 2017. Makridis co-wrote Pity with Efthymis Filippou, Lanthimos’s longtime co-writer. The Greeks shy away from, well, nothing.

Pity follows a middled aged lawyer with a “pleasing face” (per the film’s delightful press kit) who lives with his teenage son in a nice home. The lawyer is polite, well groomed, and generally healthy. Yet his wife has been in a coma following an accident, and the lawyer’s sadness over this has become the fount of all his energy and pleasure. The constant pity he receives is a perpetually replenishing life force, and now he’s addicted to it. The neighbor fusses over him, the dry-cleaner offers him a discount, an employee feels his pain. Life has never been more full than in his current, pitiful state. That is, until, his wife wakes up. Suddenly joy encroaches on his world of pity and sorrow, and the lawyer grieves the loss. He wants that pity back. So, Pity follows him as he concocts ways in which to attract that delicious, morbid succor, including destroying any happy moments that arrive, ultimately building a magnificently absurd plan to keep the pity coming.

This brilliant, very European conceit in the hands of the wrong filmmaker could be, well, pitiful, but Makridis is up to the challenge, and the result is oddly wonderful. We spoke with the filmmaker about how he chooses his subjects, works with his actors, and generally chases stories that most folks would leave in the “one day” file, if they came upon such a notion at all.

How do you find your subjects?

You find them watching people, and watching yourself. The subject appears after searching—a lot. The last movie came from a story we heard from some guy, and we started writing about it and finished in two years. It comes from just talking to each other and finding subjects we like and ideas that we like to explore.

We gravitate towards whatever grabs our attention, but we try to look at in from a different angle. The subject of sadness, of pity, has a lot of angels, and we try to find the best way to tell that story, to our taste.

What drew you to this idea of someone addicted to pity?

For Pity, all human beings have these kind of feelings inside us, in our souls, we all want to be the center of attention, to receive pity or to give pity. And to know that those are the two kinds of pity; the kind you give, and you feel okay, and the kind you receive, and you feel okay. We wanted to explore the second kind, and what you might do to receive pity. It comes naturally, after talking with Efthymis, and a personal story we heard about someone who does that. We started to explore that idea.

The first thing we write is a treatment; where he lives, his age, etcetera. We start writing, we have a first draft in one month, or two weeks if it’s going well, we have the beginning and ending of the film, so we know how it’ll start and end. Then we talk about about the scenes in between. We talk about that, have some drinks, work on that, have it in our mind how to connect the beginning and end. Then we write and write and write. It was a lot of drafts, we wrote it for two years, three years. As we’re writing, it was very difficult, so we’re thinking about who the actor is going to be, so we’re casting as we’re writing, and that helps us a lot to imagine how the actor will look, act.

It was very difficult. We didn’t find him until a month and a half before we started shooting. I wanted someone with comic timing, that’s why we choose him, he’s a standup comedian, and you know every standup comedian is a little bit depressed [laughs].

I like to work with space, I like to find the locations first and think about how the story is going to work in a location. I like locations a lot. I don’t do a lot of rehearsals. We read the script and maybe go through a scene two times. We talk a little bit about how it’s going to look. There’s no other thing we do. I like the actors to be a little bit unprepared when it comes to shooting. It helps create the mood I want, the awkward mood.

From a technical standpoint, are you equally loose?

Do you have any specific methods, aside from not over rehearsing, to get your actors into the right frame of mind?

Sometimes I use music to get the actors in the right mood. It’s a trick that I do, I like music a lot and I think it helps describe the way things are supposed to be. Either before the scene or at the meetings we have before we start shooting. I don’t tell a lot about who the character is, where he’s coming from, etcetera, I want an unknown area that the actor will face. The music is a tool to explain the mood the scene, how it’ll feel.

What kind of music do you use?

I use The Residents, this band, from California, I used songs from the first album “Meet The Residents,” it’s a great group, a little bit experimental, and no one knows who the guys are, they wear masks in the concert. In the crying scenes, I had him listen to the Russian composer, Arvo Pärt.

How do you feel the reaction to Pity has been thus far?

I think the screenings are going well. I’ve been surprised by how the people laughed, and I’m happy about that because they get it, it’s a comedy. The people come up after the screening and say how funny the movie it is, and how sad in a way. I think it’s worked well, and I’ve been surprised about American audiences, they get the humor. I was nervous, but at the premiere when the movie started and the audience started laughing at the point we wanted them to laugh, we all felt happy.