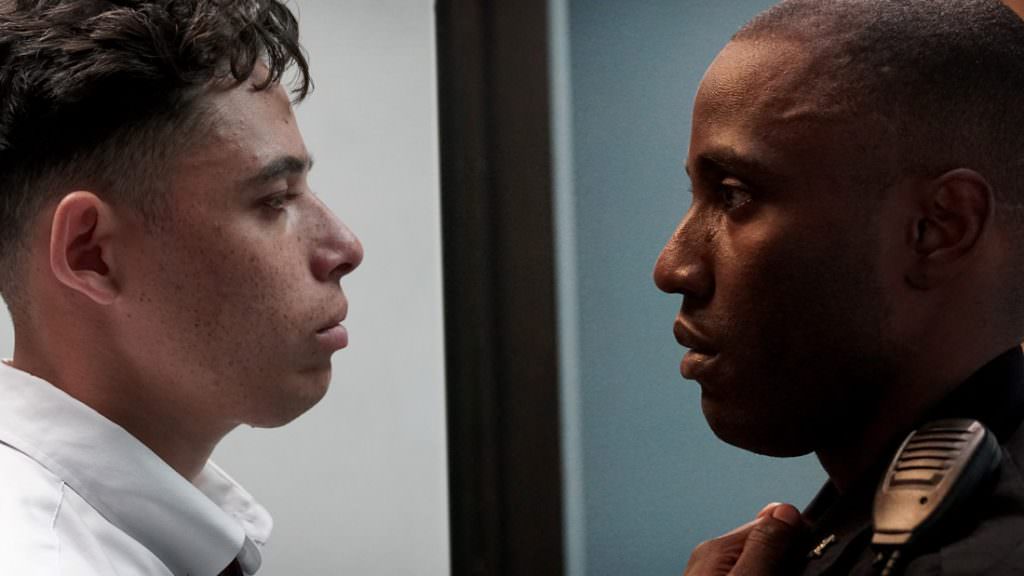 Sundance 2018: Reinaldo Marcus Green’s Monsters and Men is an Astonishment

Reinaldo Marcus Green’s Monsters and Men is breathtaking. This is the kind of film that makes a festival so important—Green, his cast and his crew deserve as big a spotlight as possible, and few festivals offer one as intense Sundance. Told from varying perspectives from a tirelessly inquisitive handheld camera, Monsters and Men takes a hot button topic, police brutality, and delivers a story of almost unbearable emotional intensity. What’s possibly even more impressive than the assured technique deployed by Green and his crew, and the across-the-board stellar performances from the primary cast and smaller roles, is how skillfully Monsters and Men shows how a single act of violence creates a dark ripple that touches people twice, thrice, ten times removed. This is powerhouse filmmaking.

The film centers around a fateful night in front of one of New York’s ubiquitous, beloved bodegas, this one in Brooklyn’s Bed-Stuy neighborhood, when a man harmlessly selling cigarettes is surrounded by the police and ultimately shot to death. The echo here to the real life death of Eric Garner, a Staten Island resident who was choked by the police after selling cigarettes and who ultimately went into cardiac arrest, is unmistakable. In his artist’s statement, which we’ve embedded below, Green discusses how the impetus for Monsters and Men was a conversation he had with a friend of his, a police officer from Staten Island about Garner’s death, ignited his desire to tackle a subject that usually forces people to dig in to their perspective and blot out all others. This is precisely the opposite of what Green does here.

At the moment of the murder of Darius Larson (Christopher Jordan Wallace, the son of the late, great hip-hip icon Biggie Smalls), we’ve met two other main players. The film opens with an African-American man, Dennis (John David Washington) being pulled over by a cop. We can sense what we think is his fear, but we’ll find out in short order what he’s feeling is rage—Dennis is himself a cop.

Next we meet Manny Oretga (Anthony Ramos), applying for a security job in Manhattan, and we follow him home back to Bed-Stuy. One of Monsters and Men’s many strengths is how evocatively it paints New York. There are no sweeping shots of the Brooklyn Bridge or the glass mountains of Manhattan—this is the New York so many millions of people inhabit, one lived partly underground in the subway, and then miles away from Wall Street or Fifth Avenue, in the outer boroughs of low slung brownstones, colorful bodegas, street fairs and housing projects, basketball courts and trains that run above ground. We watch Manny interact, with ease and apparent joy, with the people in his neighborhood, from little Victor (Josiah Gabriel), who he buys a bike off and then gives him an extra dollar, to the aforementioned Darius Larson, a big guy standing outside of the bodega, filled with warm wishes for Manny’s wife and daughter, to Z (Kelvin Harrison Jr.), a teenage baseball prodigy who Manny playfully calls a young Derek Jeter. These interactions are the stuff of every day life for New Yorkers, especially those living in and amongst the housing projects of Brooklyn, where life, while not easy, is enjoyed and celebrated in the minor, seemingly meaningless encounters that make a community.

Manny goes home to his apartment, a cozy place he shares with his mother, wife Marisol (Jasmine Cephas Jones) and their baby daughter. Every single person we’ve met in this nearly flawless opening will have their lives altered by Darius Larson’s murder, and each will be afforded a chance to have the story told through their perspective. Everyone in the neighborhood is the protagonist to their own story; in Monsters and Men, the protagonists we meet all must reckon with the senseless murder of a man whose greatest crime was selling a couple of loose smokes.

These opening minutes of Monster and Men feel lived in. The characters behave like actual New Yorkers, their interactions ring true (to this New Yorker, at least), yet the dread instilled in those opening moments, when we watched a black officer get pulled over for the offense of being black, doesn’t abate. Green wastes no time in getting to Monster and Men’s inciting incident, when Manny films the officers surrounding Darius Larson with his phone, capturing the murder and thus putting himself at the center of a storm he will not be able to control.

Actually no, this isn’t quite accurate. Manny could have controlled his fate by simply doing what the cops tell him to do with his video—nothing. He’s just gotten the security gig, his wife is about to graduate from college, and their lives are looking brighter, so long as he stays quiet. It’s an impossible situation, and Manny broods over the decision, clearly in love with his wife and daughter and wanting to keep them safe. Yet Green returns, again and again, not to police brutality, but to the commonplace and ambient menace people like Manny face day in and day out. They’re stopped and hassled and asked to explain where they’re coming from or where they’re headed. They’re asked to empty their pockets, their bags, approach the car—supplicate themselves day after day, night after night, to the NYPD, the largest police force in the world and one that must feel like a standing army to people like Manny. Monsters and Men isn’t interested in making monsters of the police—Dennis, and his partner Stacey (Cara Buono) are good cops—but he is interested in the ways in which the casual contempt and “have a nice night” bonhomie of some lesser cops, after stopping and frisking yet another minority, worms its way into the psyches of every person in the neighborhood. Manny is told in no uncertain terms that if he releases the video, his life, and his family’s, will be in jeopardy. What makes him ultimately crack, at least after one viewing, is not only the grief over Darius Larson’s murder, but the accretion of every day slights and humiliations that he and his cohort face.

It takes little time for Manny’s life to be eviscerated. He’s arrested by the very cops who had threatened him, and a gun is produced that the cops claim Manny had sold to the 11-year old Vincent, and just like that, Manny’s story is ripped away from him, and us. We’re now seeing this story through the eyes of Dennis, who looks at Manny through the one-way mirror (as seen in the featured image), knowing his life has been destroyed. The release of the tape quickly changes Dennis’s life, too. He knows it was murder, and while he’s willing to talk to his partner about it, around his wife’s friends he becomes hostile and defensive, arguing that one bad cop shouldn’t taint the entire force. This is likely an echo of the conversation Green had with his cop friend, one in which reasonable points exist on both sides, neither of which erases the murder of an innocent man.

The release of the video prompts an investigation with the IAB (Internal Affairs Bureau), and Dennis will be one of the officers who will need to speak about the cop who shot Darius Larson, knowing that there is no greater crime within a police department than crossing the Blue Line and ratting out one of your own. He has his own family to worry about, and he’s nearing a promotion. Darius Larson’s murder is a crime—in his heart it’s clear he knows that—but it’s also a potentially career ending nuisance for Dennis. He wishes it never happened, but his willingness to do the right thing is pitted against his desire for this all to go away. His eventual sit down with the IAB is one of the film’s many incredible, quietly devastating moments.

Our third and final protagonist is Z, the gifted baseball player Manny playfully called Young Jeter. Z has spent most of his teenage life pursuing his sport and keeping his head down, doing as his loving father (Mudbound‘s excellent Rob Morgan) instructs in order to increase his chances to make it to the Majors . Yet Z is black and lives in Bed-Stuy, which means he’s swimming in the same current as Darius Larson, Manny, and everyone else in the neighborhood. He has his eye on a young, outspoken protestor who commands audiences in front of the bodega where Larson was murdered. One night, Z. is stopped and frisked by the same two menacing white officers, and the experience shakes him. The biggest day of his life is ahead of him, a baseball showcase in which scouts for the Major Leagues are attending, largely to see him play. Yet Z. can’t help but feel as if he’s got it all wrong, and that walking past the bodega without being a part of the movement to end police brutality is a dereliction of duty. Soon enough he’s pulled into the protest movement’s orbit, and he risks his future in order to join them and stand against the menacing and murder of Darius Larson and people like him.

Monsters and Men takes one of the most divisive, crucial conversations in America and gives it a life on screen that would befit the work of seasoned director operating at the top of his game. This is Green’s first feature.