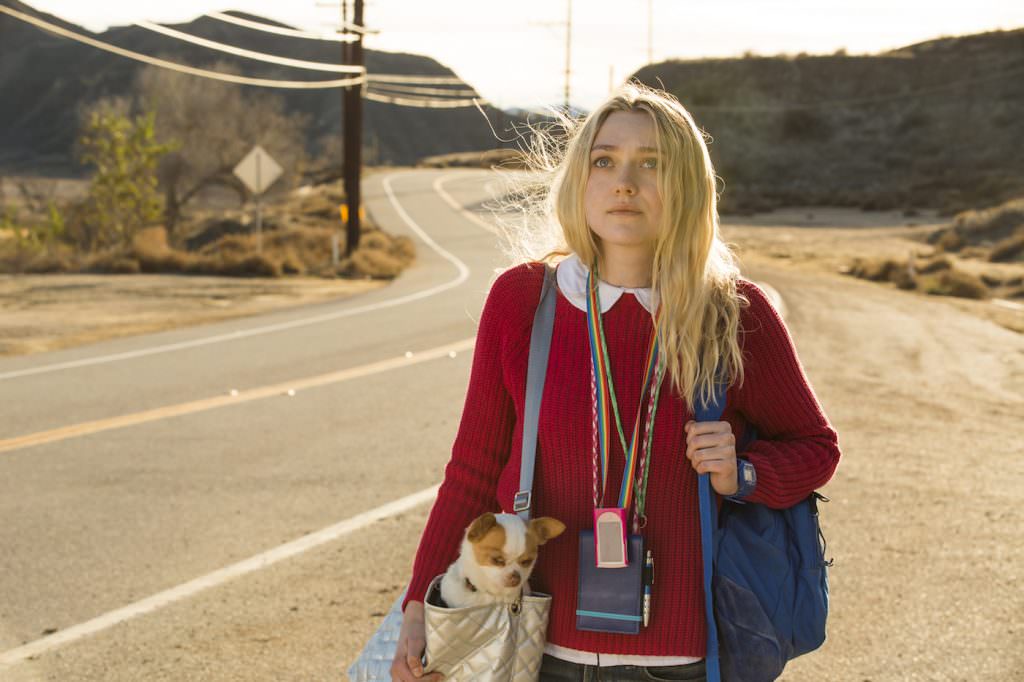 Wendy, the blonde heroine of Please Stand By, lives in northern California and writes Star Trek fan fiction. Played by Dakota Fanning, she’s hardly the only pretty, Trekkie protagonist in film history, but she is likely the first one dealing with autism and living in a group therapy home. Ben Lewin directs this Magnolia Pictures film, out tomorrow, which co-stars Toni Colette as Scottie, Wendy’s no-nonsense therapist, and Alice Eve as Audrey, her loving but unsure older sister.

In between the routines of the home and the alternating monotony and social confusion at her job at a Cinnabon, Wendy attacks a Star Trek fan fiction manuscript, which reaches 400-something stressfully unbound pages. A difficult episode during a visit from Audrey derails getting the script into the mail in time for the studio competition Wendy hopes to enter, so she takes off at dawn for Los Angeles, hoping to hand-deliver the work herself. Followed by her dog Pete, mishaps follow, as does their inevitable, if not always pleasantly begotten partner, growth (she also finds some friends, including Patton Oswalt as the world’s most loveable cop). As Wendy forges her own coming of age in the span of a few days, Scottie and Audrey tail her south, setting right off-track relationships of their own.

Please Stand By keeps a tight focus on its three leading women. If it at times seems reminiscent of a stage production, that’s because it is — the film is screenwriter Michael Golamco’s first full-length movie to come out with a major studio, and he wrote the script based off his one-act play of the same name. We sat down with him to talk about shifting into Hollywood, writing for a character on the autistic spectrum, and his die-hard Star Trek fandom.

This is your first full-length film in wide release. How’s that going?

The cut turned out great; I’m really happy with it. I thought that Ben did a great job translating the script to screen. He’s a great director to work with and really fun.

What brought you to autism as a central aspect of your screenplay?

I had read this article in The New York Times, called “What Are Autistic Girls Made Of?” It was about a summer camp for autistic kids, and the focus was girls. There are two cases in the article. One is that the condition makes it difficult to see social cues, but there’s the need to connect — but [autism] makes it difficult, which is heartbreaking. And then one of the girls in the article, she writes Harry Potter fan fiction. And I loved that so much. From that, the character of Wendy appeared.

[From writing fan fiction], the takeaway for me was that you stop being a consumer and become a creator. You start speaking. And it does fit so well, to talk about a character with autism who reaches out to connect, and that’s the thing that lets her find her way forward. When you have a character with autism and her own agency, she wants to connect with the world. That’s the story I wanted to tell. I think this is something people relate to, to want to create something, and get it out there, show it to the world.

To write Wendy’s character, how did you research the condition?

I read as much as posible, I talked to people. When we were working on the movie, we had a great coach named Elaine Hall, to make sure Dakota had all the information she needed. When I was writing, the key thing I learned is that autism presents differently in different people. I didn’t want [the film] to be about the condition but about the character, how she copes with everyday life. She’s right on the cusp of becoming an adult, getting her own agency, and finally manages to get it. It’s a coming of age thing, in a way.

Did your experience as a playwright inform writing for film?

Absolutely. Please Stand By started as a one act play. It was basically the first act of the eventual feature. Playwriting for me is about character, taking time to figure out who these people are. In playwriting it’s dialogue and precision that communicates those ideas. Film is more visual, so there’s a lot of translation and rethinking to do, but it’s still important to have that character and conflict, which theater does so well. That really translates across any stortellying. So that [playwriting] background, that’s how I think about the world.

Was the film industry receptive to a movie with an autistic main character?

Yes, absolutely. Autism has touched so many people. It’s sometihng that as a society we need to deal with and grapple with: how do you make room and space for people with autism? I think it’s incredibly important for us to do and a lot of pople feel the same way. Everyone who read the script was really into it. The big thing for me is that a lot of stories about autistic people, they tend not to give agency to those people. Rain Man, for example, is more about whether Charlie Babbitt can accept his brother Raymond — it’s more Charlie Babbitt’s story. I wanted to do something where the character with autism was at the center of the story, had agency, was not static, who becomes who she needs to become. That’s important for an audience to see. A lot of people seemed to respond to that the most, in the script.

And Wendy is obsessed with Star Trek. Are you a Star Trek fan?

I’m obsessed with Star Trek. I write for a television show, Nightflyers, and talk about Star Trek all the time in the writing room. With people with autism there’s the idea of special interests — they could be any hobby or any kind of thing that you can fan boy or fan girl around that gives you comfort. For me it’s Star Trek, and I think for Wendy, it was a perfect fit. I think about it constantly, and [as they say], write what you know.