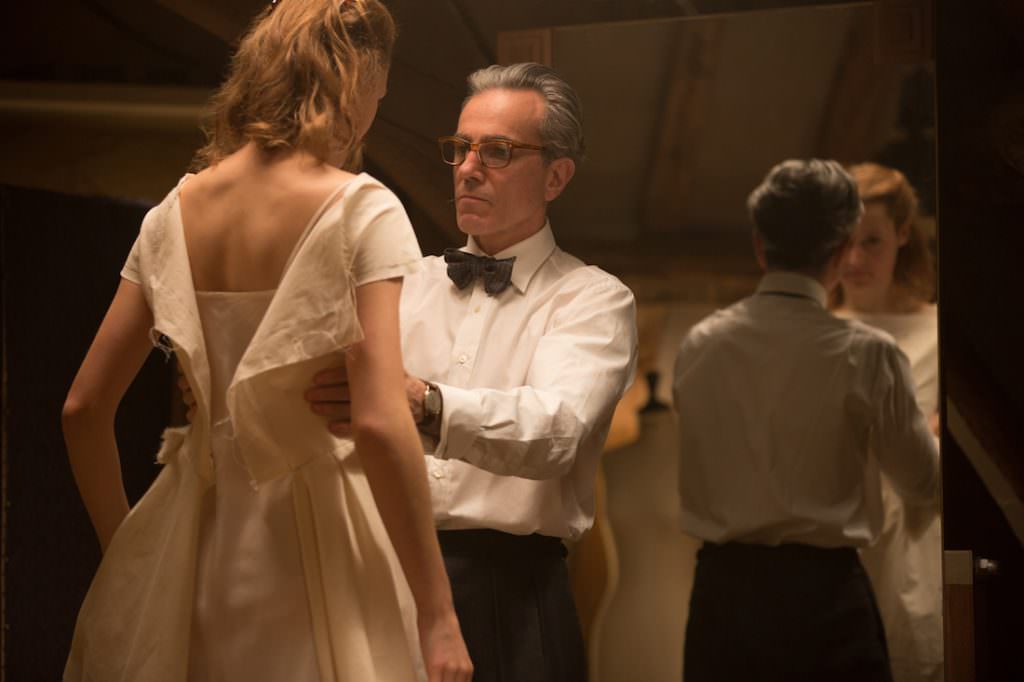 The trio, whose collective credits include The Force Awakens, The Guardians of the Galaxy, Jurassic World and Avatar, put a lot of work into the epic knife-on-toast audio. “We brought in various breads and toasts, different types of silverware, different kinds of ceramics to enhance that moment,” Scarabosio explains. “We also processed the sound with noise reduction so it felt like we were sucking the air out of the room. Then we added the sound on top of that so you hear the crunching toast the same way Woodcock does, where you just want to scream ‘Make it stop!'”

Phantom Thread’s quiet domestic conflicts contrast mightily with the brash popcorn spectacles often sound-designed by Scarabosio, Acord and Wood. “I came off Last Jedi onto Phantom Thread,” Wood says, “So it took time for my mind to adjust from doing this big action movie where you’ve got buildings falling and spaceships flying by and laser guns shooting. Paul’s story was much different but it still comes down to very deliberate editing, designing and mixing process. The main thing is to get the director’s wishes heard, regardless of what kind of movie you’re making.”

Much of Phantom Thread takes place within the ornate “House of Woodcock” that serves as both home and studio for the hyper-sensitive fashion designer. His devoted coterie of seamstresses barely make a sound, but the floorboards speak volumes. Wood says, “We played with the idea that Woodcock’s house is a character unto itself, so we developed this language of creaks and pops. The background noise manifests itself in different ways depending on the needs of the scene.”

Case in point: Woodcock goes up to his attac and fits Alma in a dress for the first time. “It’s basically Woodcock’s lab and there’s almost a sense of malevolence to that room,” Wood says. “It’s not quite haunted house, but we wanted to put you on edge and make you feel uneasy. We were going for something a little tense and not uncreepy. It’s a subliminal thing.”

Since Woodcock’s domain revolves around clothes, the sound of textiles constitute a key part of Phantom Tread’s sonic palette. “Fabric is actually more difficult than you might think because it’s a broad sound and not very distinct when you record it in Foley,” says Acord. “Part of our challenge was to find as many fabrics as we could, from silk and cotton to wool, with different textures, thicknesses and types of thread.”

The designers rounded up a batch of old dresses as source material. Foley artists then rustled, snipped and rubbed the fabrics to create a library of recordings tailor-made for every dramatic occasion. Fabric, floorboard and breakfast elements were all stitched together during a four-week final mix. “We went through the movie listening for every little sound made on the screen,” Acord recalls. “Paul’s very keyed into the sound and how it’s going to push the story forward. It was almost like a music composition.”

For Scarabosio, Accord and Matthew, who earlier worked with Anderson on The Master, Phantom Thread re-affirms the director’s mastery of atmosphere and narrative. “Paul’s an old soul,” says Acord. “He takes more of the old school approach to filmmaking.” Hewing to tradition, Anderson likes to use audio recorded on set during production as much as possible, according to Scarabosio. “Production sound gives the track this sort of minimalist, sensual, classic movie type quality,” he says “When you work with Paul, you try not to over do it. You let the drama carry the story. We just want to accent that story.”