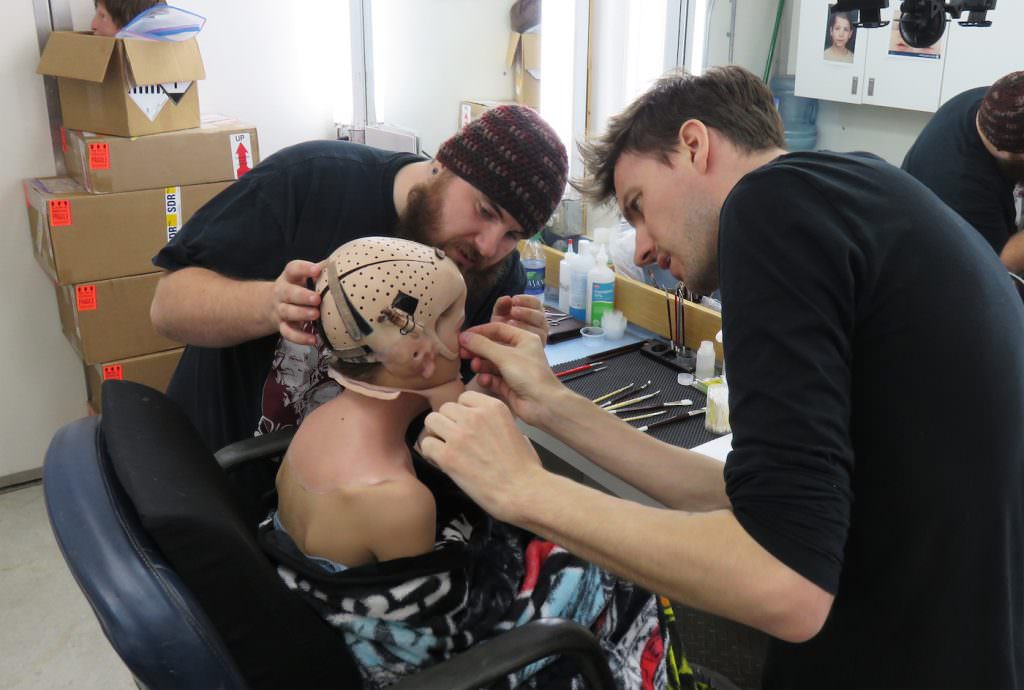 The last time we spoke to special effects makeup artist Arjen Tuiten, he was explaining the laborious but successful transformation of Woody Harrelson into our 36th president, Lyndon Baines Johnson, for Rob Reiner’s LBJ. Working alongside makeup designer Ve Neil, Tuiten crafted new teeth, ears, age spots, freckles, and jowls for Harrelson. Becoming LJB also required reshaping Harrelson’s head so it matched the 6’4″ Texan’s, and the entire transformation process is one that no actor likes. Yet Tuiten’s career has proven that once an actor submits him or herself to the process, the results are transformative in ways beyond just aesthetics. Whether he was working on Harrelson, Angelina Jolie for Maleficent, or anyone of the actors in World War Z, Pan’s Labyrinth, or Alice and Wonderland, Tuiten says that once they see themselves in the mirror, the painstaking effort becomes worth it.

“As much as actors dislike the process of sitting in the chair every day, they almost always say at the end say it helps them find their character,” Tuiten says.

Studying under legendary seven time Oscar-winning makeup designer Rick Baker (Star Wars, Men in Black, How the Grinch Stole Christmas, and much more) Tuiten may have created his masterpiece for Stephen Chbosky’s Wonder. Based on R.J. Palacio’s novel of the same name, Wonder stars Jacob Tremblay (Room) as Auggie, a young boy suffering from Treacher-Collins syndrome, which typically leads to foreshortened cheekbones, diminutive ears and downturned eyes. Auggie is entering fifth grade, and for the first time in his life is going to a mainstream elementary school. Tremblay was 9 years old at the time—Tuiten recognized immediately how difficult it would be for a child to sit through the makeup process.

“When we first got approached for Wonder, I was still working for Rick Baker, and he recommended they talk to me,” Tuiten says. “I was about to open my own studio, as Rick was retiring. With Wonder, there wasn’t another movie where a 9-year old had been the lead role in full prosthetic makeup. There’s a reason why—it’s so hard to do on an adult actor, but to do this on a child? But there was something special about this book and this character, and I knew deep in my heart there was a way to do this, but it needed some time.”

Time was not something that was in great supply, and in order to pull this off, Tuiten would have to bring to bear everything he’d learned in his career up to now. Also, with a lot of added pressure, to boot.

“Stephen (Chbosky) was on the edge about it, and he told me that we probably won’t make this movie if the makeup doesn’t work,” Tuiten says. “They were contemplating going fully digital, but Stephen didn’t see Wonder that way. As great as visual effects are now, it didn’t seem right for this film. It needed to be a great actor in great makeup. And the budget wasn’t very large to begin with. I knew it wasn’t a movie you could do on the side. It needed all my focus, because it basically had never been done. I knew if I promised Lionsgate and Stephen this could be done, I had to deliver. There were a few moments where I can assure you, I was like, I hope I didn’t make a mistake—forty days in full prosthetic makeup for a 9-year is very hard.”

There were a lot of practical concerns to sort out, and quickly. One is that Tuiten’s entire approach had to be modified so that Tremblay could be transformed in far less time. Another was the sensitivity surrounding the job itself; this wasn’t turning somebody into a fantastical creature or a zombie, this is a real syndrome affecting real people, and Tuiten was extremely sensitive to that. And finally, more so than on any other film he’s done, Wonder really did hinge on the makeup.

“I thought I could do this, but I was really taken aback by how little Jacob was, even for his age. I needed to see how he’d react to all the materials, and I wanted to meet his parents. Luckily Jacob’s parents were so nice and down to Earth, and helpful. They were a big part of being able to do this. I told him that makeup could be fun for one or two days, but after day 20 or 30, you might have an emotional breakdown.”

The film industry has very strict rules on how long child actors can work. Tremblay had 9 hours, total, he could be on set, so Tuiten had to figure out a way to create a prosthetics approach that could be done quickly.

“Every part of Jacob’s face is covered. Normally the makeup for something like this would take 3.5 hours, but that could never happen here,” Tuiten says. “This needed to be designed in such a way that it could come together in 90 minutes. In fact we got it down to 75 minutes, including his hair, upper teeth, and contact lenses.”

The prosthetics covered Tremblay’s chest, neck, and face. Tuiten and his team created an under skull that pulled his eyes down to make them appear droopy. On top of this, they had to contend with the fact that unlike adult actors, Tremblay would be growing the entire time. This required making extra sets of teeth, and designing the prosthetics in such a way that they’d flex.

“I didn’t think he’d be able to wear the lenses, but he did. I had to kind of meet him first, to get that energy off of him, but I found out there’s an old soul in that little guy,” Tuiten says. “As soon as Jacob came in, he’d sit down and would be Jacob, but as soon as the pieces came on, he was Auggie. A completely different kid. I was always felt that makeup is great for that. When you see him on set, subconsciously you react to it. Julia Roberts even said this.”

Designing the prosthetics meant knowing how close to reality Tuiten could get without making Tremblay’s life miserable.

“These kids with Treacher-Collins syndrome have underdeveloped cheekbones, ears, and a cleft pallet,” Tuiten says. “So for Jacob to create the illusion he had that, we created a full neck, cheek and chin silicon that would slide over his whole head, covering his chest, neck, chin and cheeks. Then we had a mechanical helmet that pulled his hair back and that had the underdeveloped ears permanently attached. The helmet also had thread system that ran over his cheeks. Once that was secured, we had the face prosthetic, with eyebrows individually punched in. So he’s completely covered from his shoulders up. Then the wig work would go on top, with a mechanical device to lock his eyes down. Then we’d do the coloring of the makeup, then it was time to put in the contact lenses and the teeth. Once all of that was set, we’d pull the eyes down, then on break we’d pull them up.”

The under skull that Tuiten created was made of carbon fiber, with a little device above the ears that had a fishing line-like thread that ran through nylon tubing and was connected to eye bag prosthetics. This mechanical approach allowed Tuiten and his team to make Tremblay’s eyes appear droopy without having to glue them down.

“With a kid, you can’t glue someone’s eyes down like that for nine hours, so we designed that helmet so we could release his eyes basically, so he could relax,” Tuiten says.

Tuiten says that every few years, you work on a film where you walk on set and feel like something special is happening. This was the case when, at 24 years old, he was waiting for his immigration papers so he could work in America, and while cooling his heels abroad, was asked to join a Guillermo del Toro film shooting in Spain. This was Pan’s Labyrinth, a film that Tuiten recognized more or less immediately was going to be special. He felt the same way about Wonder.

“I think Wonder is another one of those, where there was something about Auggie…I could just feel it on set,” he says. “Stephen would turn to me in video village, and I knew what he meant, that 50 years from now, people may still remember Auggie. I told Jacob’s parents that while he doesn’t realize it now, but I think this movie is going to have a special place in his heart for the rest of his life. Sometimes I have to pinch myself a little bit that my makeup was able to contribute this much to a film. Every film is so different and so challenging. It’s always something different. Makeup FX doesn’t get celebrated much, it’s an art form that people don’t necessarily know much about, like fashion, for example, yet you constantly have to come up with something new. Our materials are constantly changing, it’s a lonely life (laughs), but at the same time, I wouldn’t want to do anything else. In the end, I’m doing what I loved to do when I was nine, which is to create things with my hands.”

Tuiten recalls being a kid and being mesmerized by movies, but he always knew which part of the make-believe world he wanted to be a part of.

“Makeup was a lockdown for me. I saw The Neverending Story, Harry and the Henderson’s, The Terminator, The Exorcist…there were little key moments in these films for me,” he says. “I knew it was meant to be. I don’t think in 20 or 30 years from now I’ll be doing anything else than special effects makeup. I like to help create things that live on beyond me”.