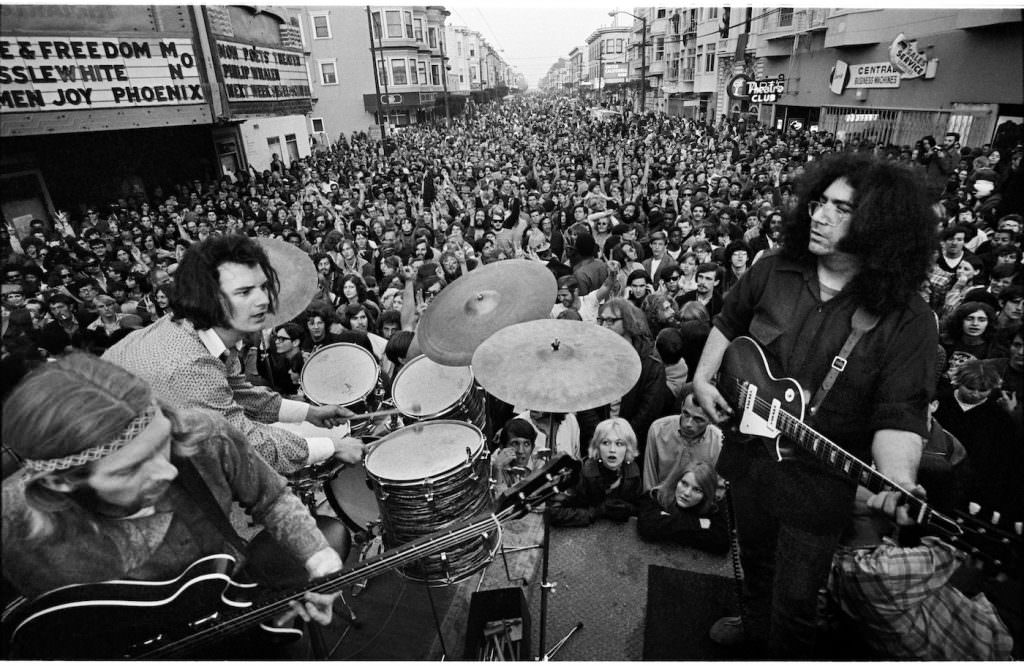 It was supposed to be a 90-minute documentary due for completion in 2015 in honor of the Grateful Dead’s 50th anniversary. But when filmmaker Amir Bar-Lev in 2003 started digging into the story of guitarist Jerry Garcia and his band mates, one thing lead to another and he blew past the 2015 deadline to produce an epic four-hour film. Short-listed for an Oscar, Long Strange Trip aims to embody the group’s free-flowing aesthetic, says Bar-Lev. “We tried to make the film Grateful Dead style, which is to say we went into the project very open to finding out what the movie wanted to be.”

Long Strip Trip evidently wanted to be a deeply textured saga, organized into six “chapters.” Early on, the psychedelic origins story details how Phil Lesh, Bob Weir, Bill Kreutzmann, Ron “Pigpen” McKernan and Garcia ingested LSD when they performed at “Acid Test” parties hosted by proto-hippie novelist Ken Kesey. Bar-Lev, who made 2010’s Oscar-shortlisted The Tillman Story in between his Strange Trip forays, observes “The Dead’s notion of wanting to be part of a collective comes directly from their LSD experience. It’s about non-hierarchical thinking, which is why the relationship these guys cultivated with their fans and road crew was one of inclusion.”

In keeping with that ethos, Long Strange Trip affords ample screen time to fan-turned-backup singer Donna Godchaux, garrulous roadie Steve Parrish and cantankerous ex-tour manager Sam Cutler. “I don’t like to chop up interview subjects into sound bytes where you’re just marching through time,” Bar-Lev says. “We found Sam Cutler living in his van in Brooklyn. We’re with him when he gets pulled over by the police and he says ‘I don’t worry about cops because I never carry drugs. I find them wherever I am.’ He looks at a Hassidic Jew and says ‘You don’t score off this guy. You score off that guy’ and points to somebody else on the sidewalk. Another filmmaker might say ‘That has nothing to do with the Grateful Dead,’ but the way I see it, I’m making a character-based story about a collective. It’s not a history lesson, it’s a movie, so you want to spend your time with people who are interesting. And to me, seeing how the tour manager scores drugs even to this day? That has everything to do with the Grateful Dead.”

To satisfy Long Strange Trip’s more-is-more approach, Bar-Lev and his team amassed mountains of old audio tapes, Super 8 home movies and 15,000 photographs. Bar-Lev acquired not just the iconic pictures, but everything the photographers had ever taken of the band. He says, “By having this onslaught of volume of photos, we were able to create animations where we basically pack everything into a shotgun and aim it at the back of your retina.”

Garcia died in 1995 after years of cocaine and heroin abuse, but his spirit burns bright in this bittersweet cautionary tale about a guy who just wanted to play music but instead became a star. “Whatever failings Jerry Garcia had, he was not a narcissist,” Bar-Lev says. “He had a healthy mistrust for celebrity worship. Not to got on my high horse, but I think Long Strange Trip has a lot to say about the narcissistic age we’re living in today. As a father of three and as an American, I think there’s tons of important stuff in this film, not because the Grateful Dead is some seminal band from the sixties but because the ideas that animated this group of people are still extremely interesting.”