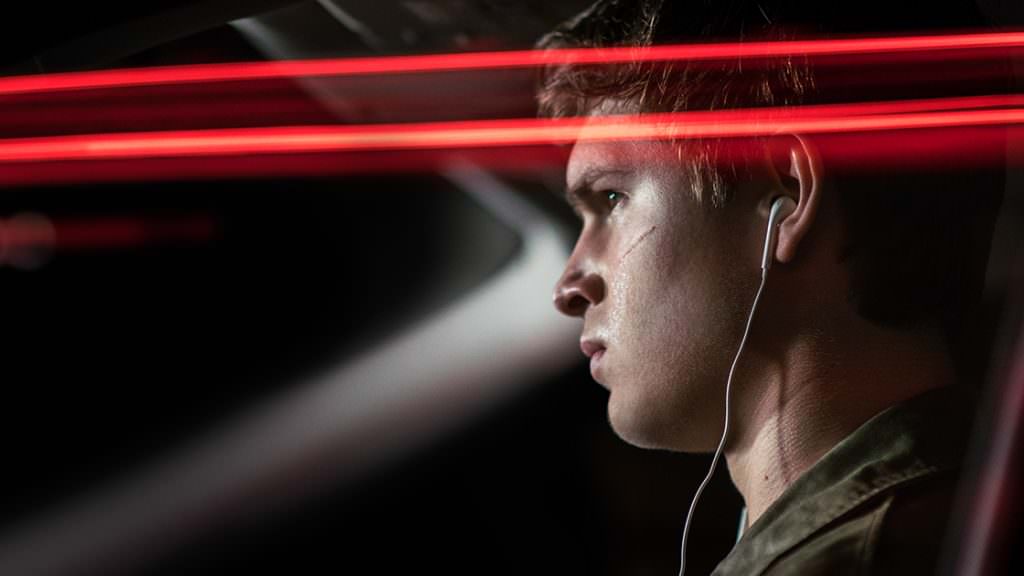 As a contingency for speaking with me about his work on Baby Driver, supervising sound editor, sound designer, and re-recording mixer, Julian Slater, made me promise two things: watch it on a really good system and turn up the volume. After running a check on my speakers and ensuring my neighbors were out for the day, I cranked it up and was blown away. It would take dozens of viewings to begin to appreciate the layers of audio that Slater has choreographed for Baby Driver, but he broke down some of the highlights for us.

More than seven minutes pass before any dialogue is even spoken and sound is immediately the film’s star. Getaway driver, Baby (Ansel Elgort), makes a spectacular escape in a red Subaru WRX to the tune of Bellbottoms by The Jon Spencer Blues Explosion. The scene explodes with car sounds and guns shots in an expertly executed chase. Slater and the team recorded every car that appears in the film on a racetrack, but that was only a baseline. From there, the audio wizard worked the real magic. “Every time you rev [a Subaru], it goes ‘Tchhh vroom.’ If you’re trying to sync sounds to the tempo of a music track, it completely screws you. That red car at the beginning, only about 15% of that sound is what that car actually was. The rest of it is an amalgam of about five other different cars.” 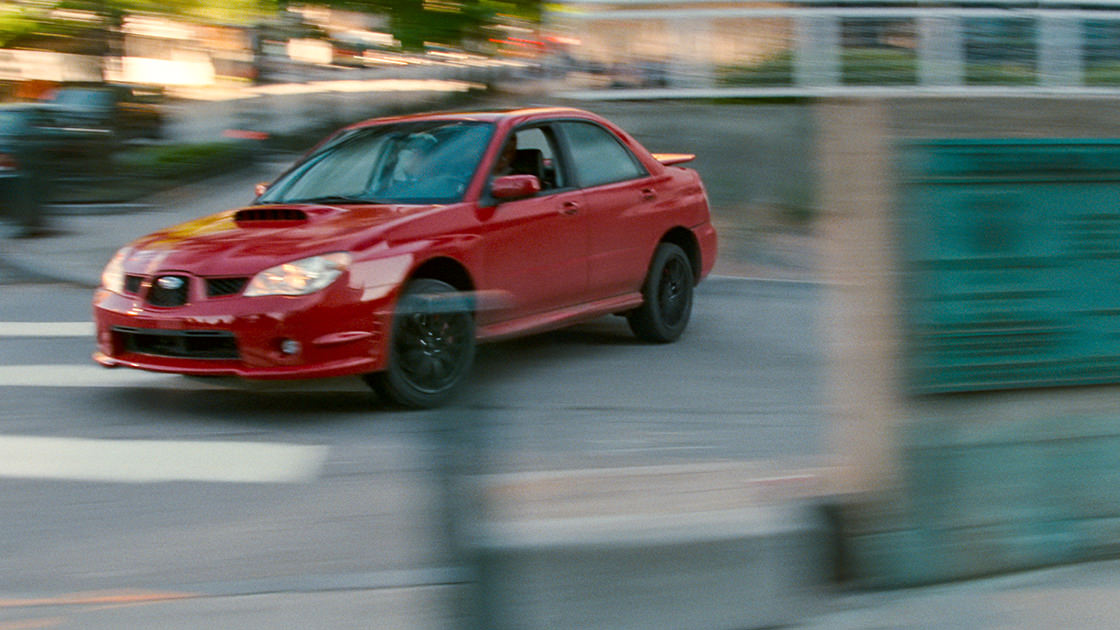 The Baby Driver soundtrack was one of the hottest albums of the summer. Wright wrote many of the music cues into the script and cleared the music rights before production. This left Slater with the challenge of matching the right sound to the right moment. While Slater normally works in timecode, Baby Driver called for a different approach. “Because we’re working with music so much, we worked in bars and beats. We worked in musical notation,” Slater explained. “We map the tempo out, and in that car chase sequence, all the bank alarms, all the skids, all the police sirens, they’re all in sync with the music. If you’ve got a tempo that’s going all over, and you’re matching a police siren to it, which is a constant, it sounds grated. Sometimes it just doesn’t work cinematically. When it sounds crazy, we have to take it out of the mix and feature the car engines and all that kind of stuff. When it gets back in sync and it sounds realistic again, then we feature it again in the mix.”

Slater is a firm believer in style over substance. Sound is a vehicle for telling the story, and he pushes the limits on creative interpretation. As the sound designer, Slater comes up with the right sound for the right effect, which might not always be what you expect. To create the ‘whooshing’ and roaring of the engines, he sometimes mixes the car sounds with animal roars. “Artistic license is always the premier thing,” Slater said. “To me, it’s about escapism. It’s all about artistic license. To be honest with you, things in real life don’t actually sound that great. They don’t sound that cool. You’re always trying to push it to new realms and make it sound interesting. Even on a subconscious level as an audience member, it keeps you interested in what’s on the screen or helps emphasize it.”

As the audience is drawn further into Baby’s daring and dangerous world, it’s revealed that the ace driver suffers from tinnitus. To drown out the constant ringing, and masterfully time his driving, Baby tunes into music from multiple iPods. “Whenever he’s not listening to music in the movie, there’s tinnitus playing,” Slater said. “The tinnitus gets louder in the movie as he gets more stressed because that’s how tinnitus works. I spoke to people with tinnitus for various reasons trying to figure out how tinnitus sounds and when it happens.”

Watch closely, and you’ll realize Baby is in every scene. To bring the audience into Baby’s head, Slater executed some brilliant sound design. This is where having the proper audio system, or watching the film in a theater, comes into play. “It’s coming out behind you and above you as it would if you were listening to ear buds,” Slater explained. “Then when he pulls out his right ear bud to listen to someone talk and it’s still playing in his left ear, the music is still playing on the left-hand side of the cinema throughout the whole scene. When he puts it back in, it pops back in.”

Even before you know about Baby’s affliction, the tone is set from the start. It’s a launching point that announces the sounds are going to be intricately woven with careful detail. “The very first thing in the movie is the Sony logo that turns into tinnitus that turns into Steven Price’s score that turns into a brake squeal of the Subaru WRX that turns into the beginning of the music cue,” Slater explained. “The whole movie is pinned on what’s happening next. It’s not a sequence of one off things. They inherently happen together. The tinnitus sound, whenever it happens, is key to the outgoing music or incoming music so they all journey through as one singular piece.” 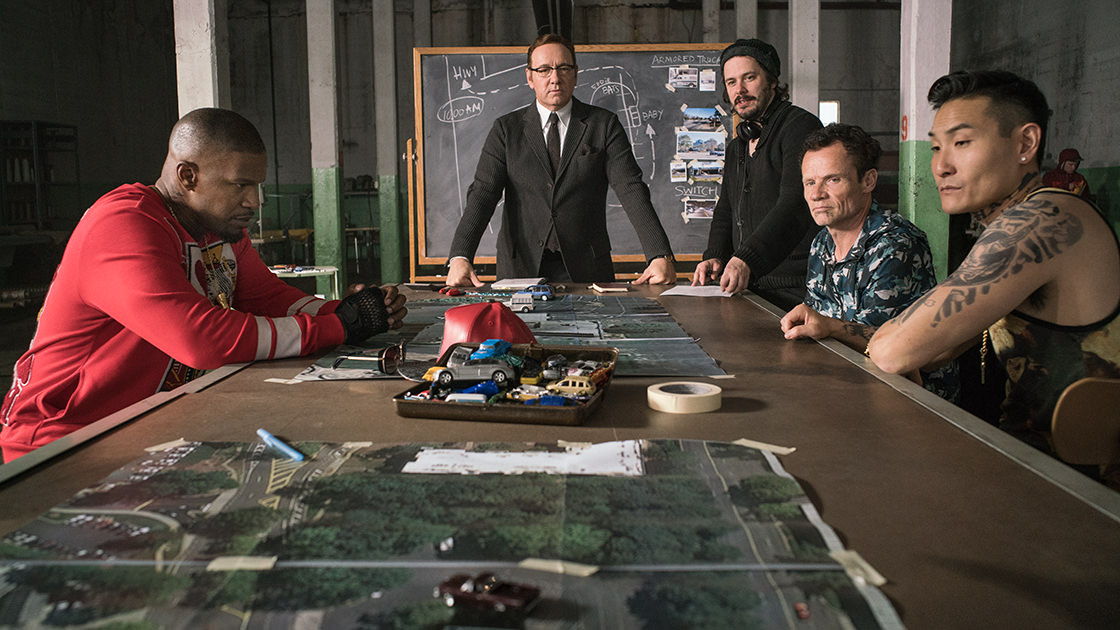 Any given scene is a triumph of audio orchestration, but one scene in particular stands out as a master class in sound design. Baby likes making mixtapes of everyday life, and Slater does this at a professional level near the climax of the movie. Following an intense shootout, Doc (Kevin Spacey) meets with the group in the locker. Slater broke it down for us and it’s definitely worth a second watch once you have the insider knowledge. “We’ve done a thing where every diegetic sound you see on screen then becomes part of the score,” Slater explained. “The scene starts with him flicking on the light switches and the light switch and the lights flickering are then delayed into echoes that become part of the score and then played in the surround speakers for the whole thing. The characters then drop bags on the floor and those bag drops go “ka-chunk” and it floats around all the surround. By the end of the scene you’ve got like eight different diegetic sounds that were part of the scene at the beginning of the scene that are then incorporated into the score. That I really dig and we did it so subtly that it’s not in your face.”

Slater regularly collaborates with director Edgar Wright. The two have worked on Scott Pilgrim vs. The World, Shaun of the Dead, and many more together. Slater has a remarkable resume including sound designer credit for Mad Max: Fury Road, but he says working with Wright is something special. “The truth is, whenever I work with Edgar, I know I’m going to relish what it is I’m doing, because he cares about sound so much,” Slater said. “I’ve worked with a whole variety of directors and sometimes sound is a secondary thing. Some directors appreciate what it can really do, and Edgar is one of them. When you have a director who has written a script with sound in mind, and the sound is a character of the movie, that’s a dream job. I’ll be amazed if it happens again.”