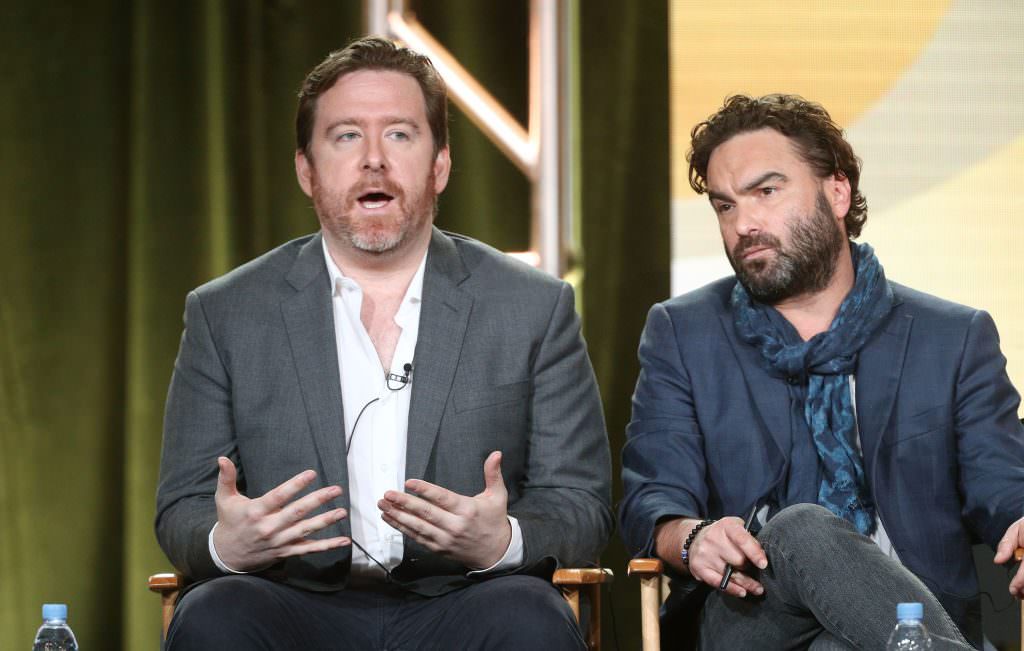 A.J. Jacobs’ best seller, The Year of Living Biblically: One Man’s Humble Quest to Follow the Bible as Literally as Possible, is now a new television sit-com that premiered on CBS on February 26, 2018. Mad Men’s Jay R. Ferguson plays Chip, a journalist who consults a priest (Ian Gomez) and a rabbi (David Krumholtz) for guidance when he is rocked by two life-changing events, the death of a friend and the news that his wife is having a baby.

In an interview, showrunner Patrick Walsh (Two Broke Girls, Crashing) talked about approaching sensitive topics with respect and humor and what he was surprised to learn from the real-life priest and rabbi who are advisors on the show.

How did you persuade CBS to agree to a comedy series about religion?

The final summation was that 84 percent of the world aligns themselves with religion in one form or another and yet the only times you hear religion discussed on television are Bill Maher saying anyone who believes in God is an idiot, and then on the flip side faith-based entertainment, which is always so solemn and so serious and heavy. Why isn’t there a comedy for these people? And of course the answer is a lot of people don’t want to joke about religion.

So my pitch was just selling them on the fact that I have a great deal of respect, love, curiosity, and interest in religion, much like the book, which was a hit among Christians and non-Christians alike.

As Jacobs discovered, there are a lot of strange rules in the Bible that even very religious people today ignore.

Some of the things that you forget about or you don’t really understand I think made the best comedy fodder for the show; the not mixing of fabrics and things like that.

It is a bit of a comedic minefield because religions and individuals have very strong views and very conflicting views. How do you navigate that?

One of my favorites is the prayer episode. We were worried about whether an audience would go along with a half hour sitcom about prayer. But they were so into it that we kept going deeper and deeper with it. That’s the thrill of multi-camera shooting. You can keep rewriting it on the night. So it’s a minefield, but I always thought as long as our heart was in the right place and our goal was not to make fun and to be respectful that that would come across. You do see Chip truly becoming a better person through doing this.

You made a change from the book that really ramped up the stakes in giving him such a powerful reason to try to follow the Bible.

There is an episode about the commandment to honor thy father. Chip has a bad relationship with his father and the story is basically: how do you honor your father if he’s a jerk? His father told him “Look, I made you go to church because you weren’t going to get any morals from me; I didn’t know how to do it.”

We had a priest and a rabbi advising us on the show who would give notes on every draft of the script and then they also came in and talked to the writers a couple times. Those were far and away the most valuable days because over the course of the two hours we had lunch together they were so fun to watch together. They were cracking each other up. It was just really cool to see and I think at this time in America it’s incredibly important to see a priest and a rabbi being friends. If this show can even just show that, I think that’s great.

As for the priest and rabbi characters in the show, you see these two men from completely different faiths really help each other out. That’s one of my favorite aspects of the show, watching those two discuss their faith and their differences. I think we need a lot more of that, of just people talking about their differences and then walking away understanding each other better.

What do you want families to talk about when they watch the show?

That’s my dream for the show – that families talk about it together. We have one episode about false idols. Of course today that has to be the iPhone. That’s a very cool episode in terms of taking these texts from so long ago and making them relevant to things you can discuss with your family. There is something in every one of these that’s a really meaty and I think important issue that a family can really get behind and talk about.