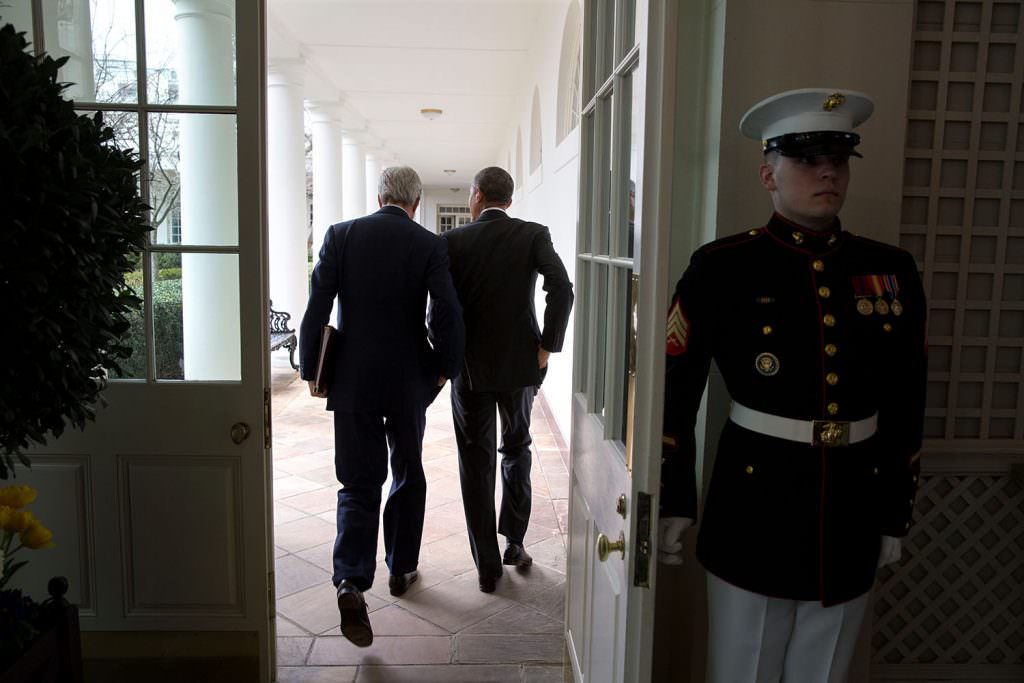 There once was a time, not long ago, when the sum of US foreign policy goals couldn’t be distilled to an acronym that fit on a hat. Simply stating such a thing might inspire yearning for eighteen months past — or stoke the fires of long-burning vitriol. The Final Year, director Greg Barker’s evenhanded front-row look at a swath of the last Presidential administration’s policies being enacted, or at least striven for, clearly intended no controversy in incidentally making such a statement. But the political about-face of November 2017, a shift which Barker’s primary subjects  — President Obama and his foreign policy team, Secretary of State John Kerry, UN Ambassador Samantha Power, Deputy National Security Adviser Ben Rhodes  — witness in front of his cameras, becomes an on-screen demonstration of the country’s divided tendencies, as well as a harbinger of more to come.

So, since the The Final Year is about one administration, and not another, since its main characters express one set of feelings about the current president, and not another, the film will probably be considered “controversial,” anyway. Barker, whose past documentaries include Manhunt: The Inside Story of the Hunt for Bin Laden and Sergio, anticipated this. “Editorially, John, Julie [Battsek and Goldman, respectively, the films’ producers] and I always recognized that this film will be controversial — the very nature of its subject matter almost guarantees that — but my intention all along has been to make a film that goes beyond the politics of the moment, and helps foster a wider discussion about how America can and should relate to the wider world.”

It would be a shame, should such a goal get lost in an artificial storm. The Final Year is a record of recent history, a worthwhile educational document on what enacting foreign policy actually looks like, and a compelling film about how the US interacts with other nations. In a couple surprise instances, it’s also a tearjerker: Samantha Power, in particular, is a source of pathos, whether she’s reminiscing about her own trip from Ireland to the US while inducting new citizens, or meeting a woman whose husband and children were taken by Boko Haram. Overall, it’s a thought-provoking documentary, quietly trailing members of an administration going about their work at the end of their tenure, trekking around the globe and attempting to lock in a legacy and solidify diplomacy as they prepare to move on after eight years.

Of course, with a seismic political shift in the offing that, when Barker began shooting Kerry, Power, and Rhodes, as well as Obama and National Security Adviser Susan Rice, at the beginning of 2015, was hardly anticipated, the director’s subtext changed, too. “In retrospect, what our cameras captured was more than just high-ranking government officials at work, as fascinating and informative as that may be,” Barker says. “We captured a worldview, an attitude, an approach to international affairs that — we now know — was fleeting, unique to a particular moment.”  The Final Year cuts chronologically between its subjects, and you get the sense that the early inclusion of a shot of Trump on CNN, or a foreign exchange candidate asking Rhodes about his political viability, were once offhand nods to the then-improbable seeming candidate, until the documentary reaches November 2016, and the country takes a sharp right turn.  Whether or not Barker anticipated filming his subjects in a state of shock, he doesn’t shy away from showing it — a shot of a flabbergasted Rhodes standing outside on election night trying to get some air and formulate a sentence at the time (it proves too much) will probable resonate with one segment of the audience and at the same time, however unfortunately, perhaps be a point of ridicule for another.

But this is not a documentary about Trump, or Republicans and Democrats, or even, really, the specific subjects Barker’s cameras follow around for a year. Sometime in 2017, there was a Huffington Post article that went viral, in which the author conveyed that she just didn’t know how to explain to people who didn’t care that they really should — about their fellow citizens being able to afford to eat, to see the doctor, to get an education — and through that, she expressed her dismay that she needed to convey this at all. Intentionally or not, The Final Year communicates something similar, on a global scale. Yes, Boko Haram is still terrorizing swaths of western Africa. No, the Syrian war has not been ended. Is it Obama’s fault? Trump’s? That’s not the right question. Barker’s shots of American politicos attempting to address these issues, spliced with negative headlines and the voices of apprehensive cable newscaster commentaries, get the point across that this is awfully complex stuff. His on-the-ground shots in the places actually afflicted by these issues drive home why you should care — no matter who sits in the White House.