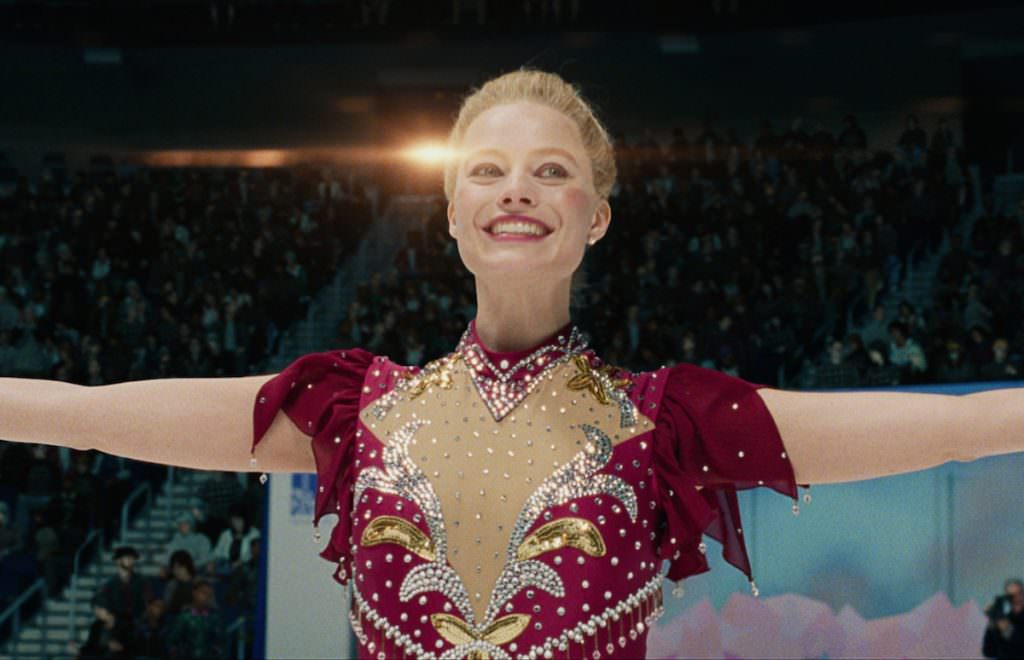 How I, Tonya‘s Makeup Department Head Helped Craft one of the Best Scenes in 2017

Arguably the most emotionally riveting moment in the hit film I, Tonya, happens in front of a makeup mirror.

The movie chronicles the life of figure skater Tonya Harding, who was implicated in a vicious assault on her rival skater Nancy Kerrigan shortly before the 1994 Winter Olympics in Lillehammer, Norway.

In the scene, Harding, played by Margot Robbie, sits alone in a darkened, silent room staring grimly at her reflection. She is at Lillehammer, about to perform her free skate. Thanks to a poor prior routine, Harding knows that her lifelong Olympic dream is slipping away; moreover, hundreds of journalists and hundreds of millions of television viewers are waiting to see her crash and burn.

Robbie applies thick gashes of blood-purple lipstick to her cheekbones. As she blends the lipstick in, she fights back tears and forces herself to practice the phony smile required of female skaters and gymnasts. She masters the facade on the third try, her eyes absurdly wide, a sizable fleck of purple lipstick visible on her bared teeth, and a telltale tear sliding down her cheek.

The scene, which lasts nearly a minute with no cuts, feels like an iconic cinematic moment in the making, one that echoes another film with an unforgettable disgraced woman at her makeup table.

“I love to call it our Dangerous Liaisons scene,” said I, Tonya Makeup Department Head Deborah Lamia Denaver, referring to the moment in that 1988 film in which the Marquise de Merteuil, played by Glenn Close, removes her makeup as if in a trance. As in I, Tonya, the scene signals the Marquise’s inevitable doom.

“Tonya did have the ego of a champion, but at the same time she always felt defeated. That’s what I got from that Dangerous Liaisons moment – after all that, there was still that defeat,” Denaver said.

Amazingly, Robbie’s makeup choices weren’t scripted. Denaver gave the actor an array of options about how to make herself up without stepping out of bounds of the “Tonya” look.

“We went over what would be easiest for her to do, mascara, lips … don’t do your full mouth, just do the inside of your mouth, all the things to make sure it still stays looking correct,” Denaver said. “I just wanted her to apply it like Tonya would apply it, not like Margot would apply it.”

Such coaching was especially necessary because Denaver had to entirely cede her expertise to her actor. “That was such a dramatic scene, we were either in the corner, or stepped out of the room so she would have the moment with the director, and then we would just come back and clean her up and let her do it again.”

Robbie plays the lipstick-as-blush moment with such conviction that it feels like it must have been based—like much of the rest of the film–on research about either Harding herself or figure skaters in general. In fact, Denaver was simply thinking creatively about portraying Harding.

It’s a simple detail that demonstrates how makeup artists make critical contributions to character and story.

“It wasn’t that I’m going to turn Margot Robbie into looking like Tonya Harding,” Denaver said. “We didn’t have the budget for that. I just wanted to get the essence of her—to feel the period, to feel the time, to feel the pain and all the stuff that she was going through.”

Featured image: Tonya Harding (Margot Robbie) at the 1994 Olympics in I, TONYA, courtesy of NEON and 30WEST