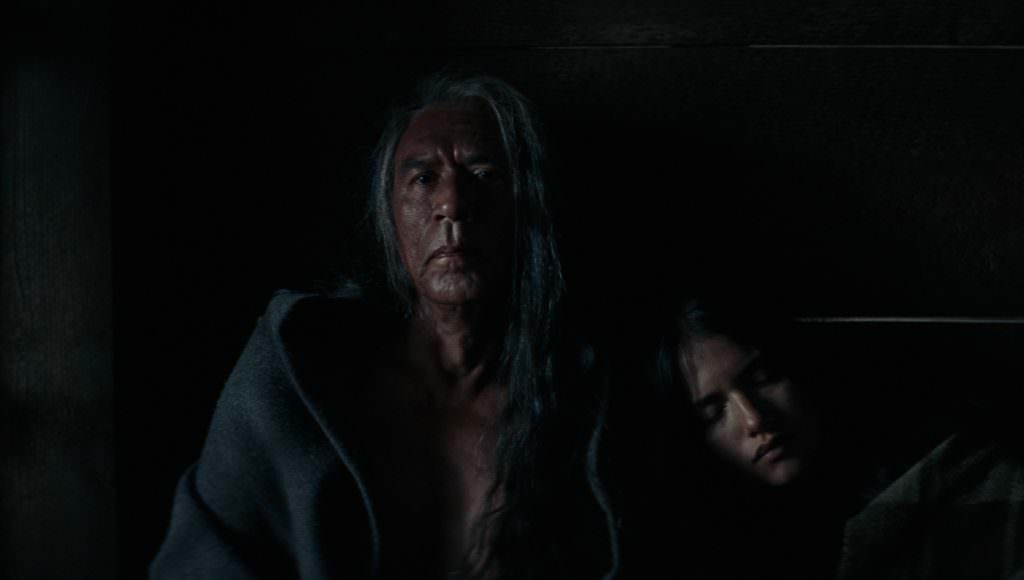 The stars of writer-director Scott Cooper’s Hostiles are Christian Bale, playing U.S. Army Capt. Joseph Blocker, and Rosamund Pike, as Rosalie Quaid, the lone survivor of a Comanche massacre. But this stark Western relies just as much on Wes Studi, whose dying Chief Yellow Hawk is released from prison to be escorted to Montana by a very reluctant Blocker. The movie, which opened wide on Jan. 26, charts both a geographical journey and an inner one: the reconciliation of Yellow Hawk and Blocker, spurred in part by the Comanche threat.

Studi has been playing these sorts of roles for three decades, creating essential characters in such movies as Dances with Wolves, Last of the Mohicans, Geronimo: An American Legend and The New World. Now in his early 70s. he became an actor in middle age, after serving in Vietnam in the 1960s and joining the American Indian Movement in the 1970s.

While in Washington for a Hostiles screening at the National Museum of the American Indian, Studi spoke to The Credits at a Georgetown hotel. The interview, which has been edited for length and clarity, proceeded under a poster for the movie. “We are all hostiles,” proclaimed the tagline, and Studi said he agreed.

“I think it’s true. We are just as hostile as we are gentle. I think it’s human nature. It’s circumstances that lead us to do the things we do that make us either hostile or not hostile.”

You’ve done a lot of Westerns. What does it take to interest you in a part?

Specifically, with this role, it was that I was going to play a man who died. I’d never done that before. Knowing at the end that you’re going to have this really great death scene. [laughs]

I like to do things I’ve never done. That definitely drew me in. As well as, I think it’s an important story for contemporary times. I hope we can look to our past and learn a lesson or two from it.

The movie is set in 1892. Did you see Yellow Hawk’s death as symbolizing the death of the Wild West?

Oh, no. In fact, I don’t think that the Wild West ever died. I think it continues, not only in the minds of people but in actual reality. It’s alive. The good parts of it and the bad parts. And if it exists in people’s minds, it’s not going to die.

But at end the young Indian boy is being sent East in white man’s clothes.

To me, what that signaled was the beginning of a colonialization. In its intent to change a people. It is a form of genocide. To eradicate a way of life, a way of thought, a way of language. An entire life system. To eradicate that is defined as genocide.

You speak Cheyenne in this film. And you grew up speaking Cherokee.

Yes. That was my first language.

No, not in my mind. Anyone, even a great linguist, would have a hard time relating them.

So if didn’t give you any advantage on delivering Cheyenne dialogue?

I think the only advantage it may have provided me is that my speaking apparatus has the ability to make certain sounds that are not of the English language.

You’re playing a role in which you don’t speak very much English. You have to hold the attention of most viewers without dialogue they can understand.

That’s true. A lot of it has to do with the inner workings of the mind. The face itself is a very expressive thing. I think that people are aware of that, whether they know it or not. We can read people’s faces much better than we think we can.

As an actor, it’s actually your job to have a face that people can read.

Yeah. I think the thought process is something that’s very hard to understand. It’s going to be seen in your face or your body. That’s very vague, but I think it does exist. And it serves the purpose of an actor very well.

Scott Cooper has said he wrote this part for you.

He studied my career to a certain degree. I guess he saw something in my performances that led him to believe I could best do this particular role. I think the role came first, and then as time went on maybe, he saw that, “Hey this is the actor who can do it.”

You shape the character when you’re performing the role. Did you work with him on it before that?

Not so much. It’s there in the script he rewrote from a screenplay originally written by [the late] Daniel E. Stewart. I believe in using the script as the Bible. From one scene to the next, we believe in what we’re doing as actors. We are these people, at that time.

The major characters’ common enemies are the Comanches, who Yellow Hawk calls “rattlesnake people.” Does he say that sincerely, or just to ingratiate himself to Capt. Blocker?

I thought of it simply as a manipulation on the part of Yellow Hawk to be free of his bonds. Whatever he believes about the Comanches is irrelevant at the time. What he’s really saying is, “Let’s take these handcuffs off, and we can help each other stay alive.” If he has to call the Comanche whatever, he’s going to do it.

One of the script’s rawest elements is that Capt. Blocker participated in the 1890 massacre at Wounded Knee. You were arrested there at a protest in 1973. What did you think of that reference?

I have no tribal connection to Wounded Knee. This happened to Lakota Sioux. But it affects all of us as Native Americans. The Army thought of them as less than human, so it’s okay to decimate them. But on a personal level, I don’t think it was anything that bled into our story here.

Your Western roles have been mostly in historical movies. Would you like to see more films about contemporary American Indians?

Oh, yes. I think there’s a need for a reminder of the fact that we are still here. And that we have been instrumental in forming the world we live in here in the United States. Few people actually know about that.

There have been some successes doing that. There was a film called Smoke Signals  that was very well received. It was directed by my good friend Chris Eyre, who consulted on Hostiles.

Rather than shooting in someplace like British Columbia, Hostiles was filmed in New Mexico, where you live.

We more or less worked in my backyard there. We shot in a number of locations around Santa Fe. And went as far away as southern Colorado. It’s nice to work in your own backyard.

Just for convenience, or for the story?

You know, we almost shot it in sequence. I think there’s maybe one location that we used twice, because of some sort of technical difficulty. It was closer to doing a play. I think that’s helpful. It’s always difficult, say, to shoot the end of the film first.

Unlike most actors who play warriors, you’ve actually fought in a war. Does that affect your performances?

I think perhaps on an unconscious level. I know what it’s like to be shot at. To shoot at people. To perhaps kill. And see others who have died alongside you. I can feel the pain that Christian Bale’s character feels when he describes those comrades he’s lost. Throughout my time in Vietnam I lost people I know. It can be an enraging thing.