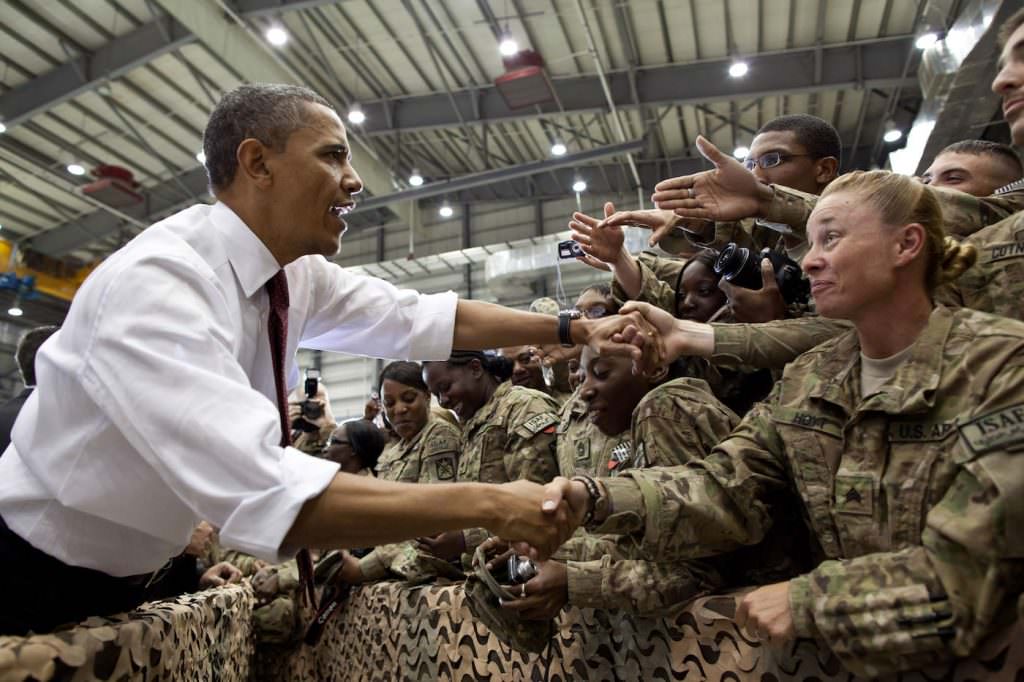 Well into Barack Obama’s second term, filmmaker Greg Barker began chronicling the actions of the president’s foreign policy team. The result is The Final Year, which spotlights Secretary of State John Kerry, U.N. Ambassador Samantha Power and speechwriter and adviser Ben Rhodes, along with a few powerhouse cameos by Obama himself. The documentary observes policy discussions, but turns more on poignant moments. These include an election night in which the Obama camp’s hopes for its legacy are dashed.

Barker and Rhodes spoke to The Credits at a Georgetown hotel in January, about a week before the movie’s Jan. 19 opening. The interview, which has been edited for length and clarity, began with Barker’s explanation of why a film titled The Final Year was shot over 15 months.

Barker: We started filming in late September 2015 at UN meetings in New York With Samantha Power and her team. It was kind of a tryout. To see if it was possible to get the kind of access we were looking for. Be in the kinds of rooms we were hoping to be in. Partly it was to get a sense of, were they comfortable? But also, from my perspective, could we get stuff that was emotionally authentic enough to actually make a film out of?

At the same time, I was talking to Ben at the White House about expanding the access, which obviously was crucial to the whole project. Some of the material from those first shoots is in the film, like Samantha’s nanny’s naturalization ceremony.

That’s one of the scenes, along with President Obama’s meeting with the A-bomb survivor in Hiroshima, that seem crucial to the film’s tone.

Barker: I think any documentary has to be grounded in an emotional journey for the characters. I used to make investigative films for Frontline, but I never saw this as the definitive account of Obama administration’s foreign policy in its last year. First, that’s not possible. We weren’t going to be in every single meeting, or have access to classified material. Also, as a storyteller, I’m much more interested in the emotions.

To get that, you have to have time, and build trust with the characters. That only happens over a period of months. I knew Samantha Power, as it happened, from previous projects, so there was a built-in trust there. With Ben and others, it took longer — naturally — to work through all that. And then we had the whole issue of how to get cameras into these rooms that we wanted to be in. That was more of a logistical/bureaucratic challenge.

How small were your crews?

Barker: No more than four. A soundman, director of photography, myself and my co-producer, Chris Buchanan. Sometimes we’d break off into smaller groups. Sometimes we’d have a bigger camera, but often it was the small cameras. Just because these are small rooms. We weren’t part of the normal press corps. Often we’d be waiting in the lobby of the West Wing for a meeting to begin, and official visitors are going in and out. You can’t just be sitting there with a big crew and lights.

Sometimes it was just me. With a little camera. Not ideal, technically. But it is remarkable what you can fix in post-production now. [laughs]

Frankly, you don’t need all that stuff anymore, because of the technical advancements. Essentially, you can light stuff in the coloring suite in post-production. The film, I think, looks great. If you had seen the earlier versions, before it was color-corrected, you would not have said that.

Ben, would you have rather seen more discussion of policy in the film?

Rhodes: No. I think what Greg did was interesting. There are these thematic questions that are relevant to policy. Why do we go to war? How do we learn from history? I could sense that Greg was very interested in Syria but also in the past. We were going to Laos, we were going to Vietnam, where there are tragic consequences to the U.S.’s going to war. The debate on Syria is whether there are tragic consequences to our not going to war. The film ends up addressing the more foundational elements of what goes into policy making.

Barker: At one point I thought, maybe this can just be a series of extended meetings. Just one after the other, and totally verité. We certainly had the material to do something like that. The scene with Ben and his staff, early in the film, talking about the Iran deal — that’s from an hour-long meeting that is absolutely fascinating. We had a 15-minute version of that that’s really gripping. The problem is, just narratively, that they’re talking about so many different issues, and they all talk in such shorthand. We would have needed a crawl at the bottom, saying what the acronyms mean.

The challenge of exposition is there in any film, but particularly when you’re dealing with policy. I had to take a step back and reconfigure the film. Just intercut everything. The film settles occasionally in a place like Hiroshima. It was an unforgettable moment. You pick the scenes that are the most powerful, and build the film, and the exposition, around those.

Also now in theaters is The Post, whose backdrop is the Vietnam War. There’s a consensus that U.S policy toward Southeast Asia during that period failed. But Syria is not a historical issue. Is there a difference in the way either of you approached those two?

Rhodes: I kind of backed into it. Because I planned the president’s travel, I tended to get involved in the policies that were underneath his travel. We went to Vietnam and Laos in 2016. So for a couple of years, I focused on Vietnam and Laos. A lot of the policy issues have to do with the legacy of the war. I had been in these debates about all these current wars. Afghanistan, Iraq and then whether to go into Syria. And it was very haunting to then visit a place where I could see the effects of decisions that were made 40 years ago. Which I think were terrible decisions.

I thought it was fascinating — and the film shows this — to have the ghosts of past wars present as we’re questioning whether to start new ones. Greg, I think, pretty deftly shows that.

Barker: That’s a theme that resonates with me very deeply. I was a young producer on the highway of death in Kuwait in 1991. On TV, everyone was high-fiving. And here are the charred bodies of Iraqi troops in burned-out vehicles. These are people whose families are mourning them. That made a huge impression on me.

Also, I spent seven years researching the aftermath of the Rwandan genocide. So I’m fascinated by the dilemma of modern warfare. When do you do something? When do you not? And the lasting effect of war. This question goes back to the very beginning of President Obama’s emergence as a public figure, with his opposition to the Iraq War. In the film, Secretary Kerry says, “Syria is my main priority.” He wanted some sort of peace deal by the end of the term. So that was natural narrative track I could follow.

You’ve likened this film to The War Room in reverse. But it’s not directly about politics, and it’s not about every aspect of a presidency.

Barker: I wanted foreign policy, because that’s my own interest. But also I realized that we’d probably have more access on these foreign trips. Of course I was thinking, Should we expand it into domestic? But that’s just too big of a subject. And a lot more people would have had to buy into the project. That was just not feasible.

You filmed during official visits to 21 countries. Were there any you weren’t allowed to take?

There was one trip I really wanted to go on, but we couldn’t, logistically. Kerry went to Antarctica. We couldn’t get on that trip because of space. Otherwise, not really.

Were the moments when something came up and you were unceremoniously kicked out?

Barker: I don’t ever recall that. There’s that scene later in the film, when they’re talking about the accidental U.S. bombing of a humanitarian aid convoy in Syria. We were just sort of around. It was very raw. I think Ben had been up all night. They’re trying to figure out how to respond. That’s a pretty authentic moment.

Rhodes: I had become accustomed to their being around. But if it had happened at the very beginning of the process, I probably would have said, “All right, stop. These guys have to go.”

Barker: You knew that we weren’t going to rush out and show that footage.

Rhodes: Yeah. If that had come out that day, it would have been a huge news story. It’s interesting how things work in the daily news cycle. There’s a lot of things in this film that would have been big news. For a day. Or for six hours. Now it’s this record of history. That’s why I think a documentary is a more effective way of informing people than our news cycle, which doesn’t really tell you anything.

Something happens at the end of the film that’s great for the story’s drama: the election of Donald Trump.

Barker: I knew throughout the year that the election was going to be a presence in the film. We cut the whole film after the election, so it’s very intentionally constructed like, everybody’s on the Titanic and the iceberg’s waiting, but they don’t realize it. On election night, as a filmmaker those are the rooms you want to be in. Where emotions are so visceral. We just focused on capturing that. Whatever we may have felt, we processed later.

Rhodes: I knew Greg’s film was more important because of Trump. This was now going to be record of an approach that would not be pursued. If Hillary Clinton was in there, they’d be doing something similar to us. With some adjustments, I’m sure. But now, I realized between the election and the last day, that Greg was creating a time capsule.