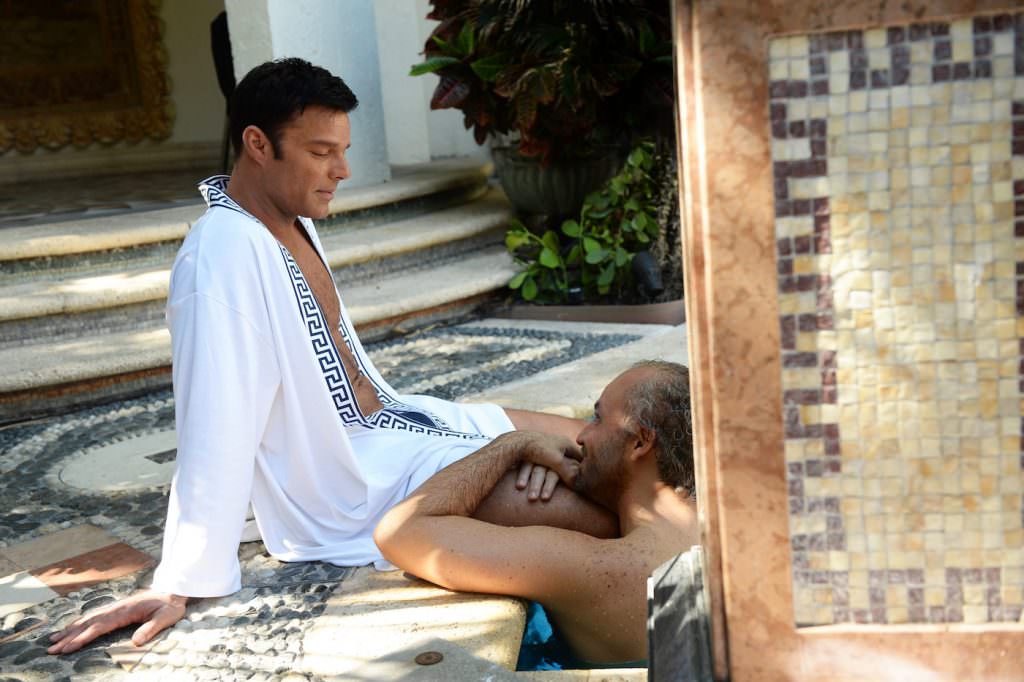 Costume designer Lou Eyrich‘s handiwork dominates the opening of Ryan Murphy’s new series The Assassination of Gianni Versace: American Crime Story (Wednesdays on FX) when the titular fashion designer begins his last day on earth swaddled in the lap of luxury. Versace (Edgar Ramirez), in silk pajamas, dresses for breakfast by slipping on a pink robe and, of course, Versace-branded slippers. Without a word of dialogue, Eyrich and creator-producer-director-writer Ryan Murphy establish Versace’s luxurious life in Miami shortly before he’s murdered by Andrew Cunanan (Darren Criss). “Making the robe pink was Ryan’s idea because he wanted to show the color and vibrancy of Miami,” she says. “The pajamas and robe were silk because we wanted something opulent that would flow through the hallways as Versace walked down the steps to the pool.”

Ryan Murphy’s name comes up a lot when Eyrich discusses The Assassination in particular and her career in general. A three-time Emmy winner for her contributions to Murphy’s American Horror Story franchise, Eyrich started collaborating with the TV auteur in 1999, employed as assistant costume designer on his first series Popular. She says, “In our first production meeting, Ryan went through the script rattling off everything he wanted. ‘He has to wear a blue fur coat, he’s got to have that.’ He was so specific about every prop, the costumes, the locations. I remember leaning over to the costume designer and whispering ‘I don’t know who this guy is but he’s going to be big time.'”

In previous Murphy-created shows, Eyrich channeled 1960s Hollywood (Feud: Bette and Joan) and Pilgrim garb circa 1590 (AHS: Roanoke). By comparison The Assassination of Gianni Versace, set in 1997, offered a fairly straight forward curatorial challenge. She says, “We spent days on end ordering online as much Versace as we could get our hands on. There’s a lot of Versace collectors out there, so we managed to put a lot of authentic pieces into the show. Edgar was really eager to assimilate Versace’s posture and movement so it all came together quite nicely.”

Penelope Cruz plays the designer’s strong-willed sister Donatella. The Spanish actress is friends with Ms. Versace and had her own ideas about dressing “Donatella,” beginning with her grand entrance in black leather pants and jacket. “A lot of the story takes place after Gianni gets killed so she there’s a lot of black,” Eyrich says. “But even though Donatella’s grieving, we wanted to show her strong side, that she’s a powerful business woman who’s being asked to take over the family business.”

Cruz as Donatella cuts a dramatic figure onscreen, inspired by imagery Eyrich studied during her pre-production research. She says “Donatella was always very well put together – – jewelry, shoes, purses, everything was very couture. And a big part of Donatella’s look had to do with corseted waists. It was also important also to show leg, because she has great legs. We wanted to emulate that silhouette without blatantly copying the clothes.”

In contrast to “Donatella”‘s sleek ensembles, Cunanan’ grubby clothes reflect his homeless status by the time the serial killer arrived  in Miami. “He was basically living out of his backpack,” says Eyrich, who scoured thrift stores for well-worn tee shirts from the period. During flashback to 1990, Criss as Cunanan favors suits that hang loosely on his wire frame. “Today, everybody goes with the tailored suit and the narrow leg but suits in the eighties and nineties were a bit over-sized in the shoulders and baggy in the leg. So when you look back at the nineties, the suits do look too big.”

On a break from costume-designing Murpy’s upcoming ’80s-era show Pose, Eyrich notes that before teaming up with the television mogul, she’d work with another detail-obsessed perfectionist: Prince. A Minnesota native, Eyrich spent two years on the road serving as costumer to the musical genius/fashion plate. “I ironed the clothes and dressed Prince backstage,” Eyrich says. “He was always very precise: ‘I want that leopard top with those black pants and this shoe. Put two stripes there. Add those buttons over here.’ I hadn’t really thought of it before but Prince knew everything that was going on around him and so does Ryan Murphy. No matter how many balls they have up in the air, with both of them, it’s like eyes in the back of the head.”