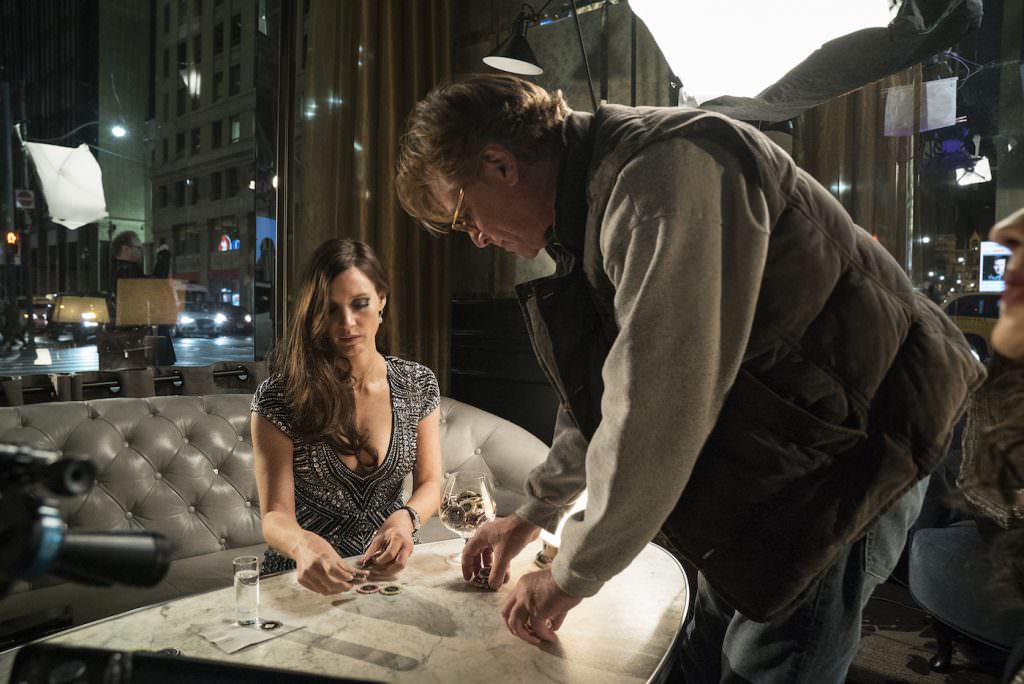 Screenwriter Aaron Sorkin is famed for writing the words uttered by The West Wing’s imaginary president and the semi-fictionalized tech magnates of Steve Jobs and The Social Network. For his first film as a director, Sorkin scripted the dialogue of a criminal: Molly Bloom, a skier who turned to running big-money poker games after an injury ended her Olympic aspirations. Hardly a desperado, the title character of Molly’s Game is a thoughtful young woman played by Jessica Chastain. The movie, which opened Dec. 25, also stars Idris Elba as Bloom’s lawyer, Kevin Costner as her father, and Michael Cera as a composite character based on several Hollywood stars Bloom declined to name in her tell-some-but-not-all book on the affair.

Sorkin writes long, flowing conversations that can include extended digressions. When he spoke to The Credits, his talk spiraled much the same way. The interview, which has been edited for length and clarity, didn’t even begin with a question. Sorkin was merely welcomed to Washington, and he was off.

“I’ve shot a lot in Washington. It’s great place to shoot. Every place you turn is something fantastic to look at. The only problem is that anyplace you’re standing you are right in the landing pattern of Reagan National Airport. The first time I was here, the first two weeks of shooting on a A Few Good Men, was location shooting. The first day of shooting, were on a softball field.

The scenes that I write are five, six, seven minutes long. That’s very long for movie scenes. We could not get through a take without a wrrrrr and our sound engineer saying, ‘No. It’s not gonna work.’ Somehow they managed to make a deal to reroute traffic to a different runway for 90 minutes. I thought, ‘Wow. You get Tom Cruise and Jack Nicholson in a movie and you get lots of muscle.’ So they did that and we have 90 minutes. Just as Rob Reiner, the director, called ‘action,’ like out of Apocalypse Now, five helicopters came up over the horizon! [laughs]

So other than that, it’s a great city to shoot in.”

Is that why you shot this movie on sets?

[laughs] Yes, we shot it mostly on sets at Pinewood Studios in Toronto. We did some location shooting in L.A., some in New York, and then three of the coldest days of my life on top of a mountain two hours north of Toronto. Where we had built, or really enhanced, a World-Cup-level ski course.

What drew you to this story of bad behavior and high rollers?

I like Blow, I like The Wolf of Wall Street, I love Goodfellas. I knew that there would be a natural gravitational pull to make Molly’s Game something like that. It’s got all the ingredients. The decadence. The money. Poker. Sex.

But after meeting Molly — not after reading the book, but after meeting Molly and discovering that the book was just telling the very tip-of-the-iceberg of this story — I knew that there was a much more emotional story about someone who refused to dish on some prominent names even if it meant leaving her destitute. The government took all her money, and her mother had mortgaged her house to put up bail.

Remember, as competent as Molly was and is, as great an academic resume as she had, that was a while ago. Now the only thing she has on her resume was that she pled guilty on federal court to running an illegal gambling operation. She’s going to have a tough time getting a job. She could have gotten a ton of money in a book advance if she had told the stories she knew. And she could have guaranteed her own freedom, a guarantee that she wouldn’t go to prison if she had told the Justice Department everything she knew.

And there’s the nature of her estranged relationship with her father, how she got from the top of that ski slope — she was supposed to go to Harvard Law School with an Olympic medal around her neck — to running high-stakes underground poker games. As I got to know Molly, I realized she was a honest-to-God movie heroine, found in a very unlikely place. And that was the story I wanted to tell.

You’re known for writing intricate dialogue. When did you decide this movie would be so reliant on monologue?

You’re talking about the voiceover?

Yes, it’s the first time I’ve ever written voiceover. Of any kind.

I wanted Molly to be telling the story, not the filmmakers. The movie lives on two levels. The past basically tells the story that’s in the book. The book ends with the FBI’s raiding her game five blocks away, she high-tails it out of town, they’ve taken all her money. She hasn’t been arrested yet when she finished writing the book.

In the present, the FBI comes: You’re under arrest. You’ve got 48 hours to get to the other side of the country, hire a lawyer, appear in court at your arraignment, and then you have to stay out of jail.

I wanted the story in the past to feel like the best TED talk you’ve ever been to. Molly’s been asked to do this, and she has movie screen behind her so she can demonstrate everything. From how a person goes on full tilt, even if they’re a great poker player, to how the settings on a ski work. While in the present, there’s no voiceover. We’re seeing a much more conventionally told story about a woman who’s trying to stay out of jail.

I really wanted to get Molly’s voice into this. Because she has a unique and very winning sense of humor. I wanted all the stuff that was charming me when I was talking to Molly to be in the movie. So that’s why it’s combination of dialogue and, as you put it, monologue.

This is the first time you’ve written a script that you’ve directed. When you were writing, where you thinking more as a director?

When I was writing Molly’s Game, I wasn’t thinking I was going to direct it. I was asked to direct it after I’d written it. I said yes because I wanted to protect that emotional part of the story that was so important to me. I would have been sad if I had become a version — even a successful one — of those other movies that we talked about.

But it did turn out that I had directed much of it while I was writing it. It was written in a way that it was pretty clear what we needed to do. All that had to happen at that point was sit down with the experts and say, “OK, literally how do we execute this? We’re going to use a 60mm lens, we’re going to light it this way? How are we going to do those stunts on the mountain?” That sort of thing.

Has Molly seen it yet?

Yes, twice. I had assumed I would set up a private screening for Molly and her father in Colorado where they live. We had our world premiere at the Toronto International Film Festival, and Molly called and said, “We” — meaning the whole family — “would really like to watch it in a movie theater with an audience” — I remember her saying — “as if it’s real movie.” And so they came to Toronto.

At the end of the movie, Molly tells us that she’s not allowed in Canada because she pled guilty to a federal crime. A lawyer in Toronto got her a 48-hour pass. She robbed a bank while — No, she managed to not commit any crimes while she was there.

Then I was in Denver because the movie was at the Denver Film Festival and the Bloom family was there. Molly has a shy streak; you wouldn’t guess that about her. But her publisher wanted her to sign copies of her book, and she agreed because part of the proceeds would go a charity her brother runs. When I went to the party after the screening, there was a line all the way around the ballroom of people who wanted her to sign the book. I loved seeing her be the star.

Here’s what I have say about Molly. If you met her, you’d really like her. You’d be impressed, and you’d say what Idris says in this movie, “This woman belongs on a box of Wheaties.”

Featured image: Jessica Chastain and Director Aaron Sorkin behind the scenes on the set of MOLLY’S GAME. Courtesy STX Entertainment