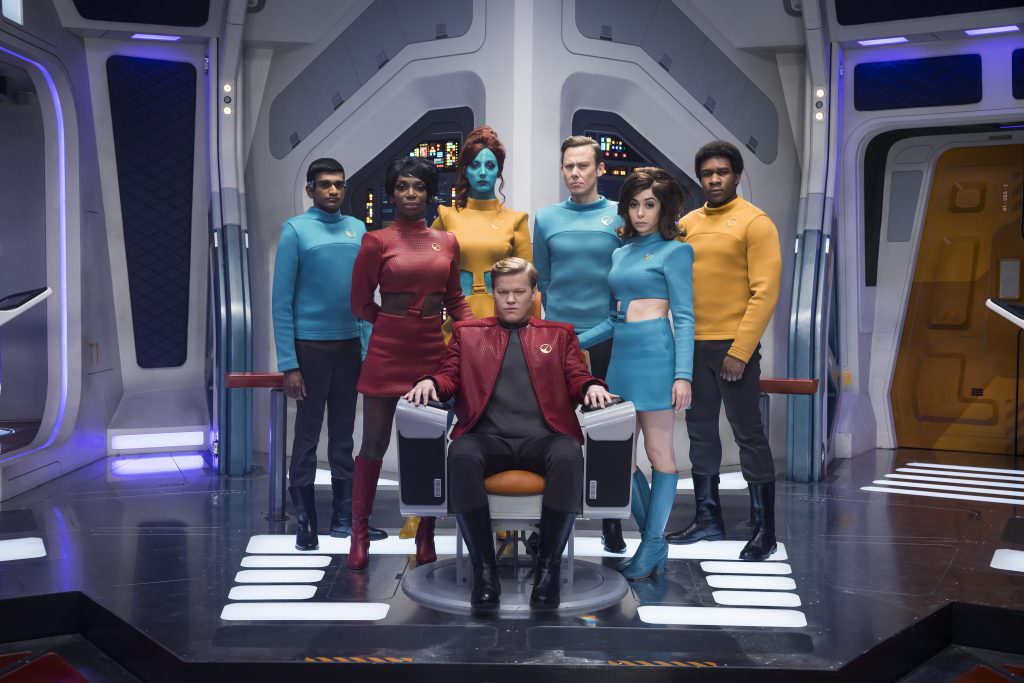 And there we have it. Netflix has released teasers for all six of the announced season 4 Black Mirror episodes. Today the series bestowed upon us the first look at their Star Trek homage, “U.S.S. Callister.”

The original Star Trek series premiered in the 1960s and imagined a future with enhanced weaponry, communication, and commingling intergalactic species, all thanks to unfettered space travel. Led by the infallible Captain Kirk, multiple species of aliens came together to protect the universe, get into adventures and find new alien worlds while aboard the Starship Enterprise. The show was groundbreaking for imagining new technology, as well as broaching social issues—even Quentin Tarantino himself wants a piece of the Star Trek universe.

“U.S.S. Callister” references the series with colorful outfits, a Star Bridge (of sorts), go go boots and big hair. Jesse Plemons plays Captain Daly, beloved by his crew, but this being Black Mirror, something’s not quite right. Enter a new crew member, played by Cristin Milioti, who is not only unfamiliar with the team’s operations, but might even be unsure how she got onboard in the first place. The overdramatized tones and one note villain seem to be more than the Milioti’s character can stand.

This is a really interesting tone for the series, as most of the Black Mirror episodes are set in the very immediate future. “U.S.S. Callister” appears to be a hybrid of retro nostalgia and a far off future filled with space travel and communication with inhabitants of other planets. It’s difficult to say what the hook will be here, but it appears to hinge on Milioti’s character being starkly out of place.

“U.S.S. Callister” joins “Arkangel,” “Black Museum,” “Crocodile,” “Hang the DJ,” and “Metalhead” as the episodes announced this season. Because the series is released on Netflix, there are not strict guidelines on the length of each episode. Some can reach near feature length runtimes.

The biggest mystery of the season remains when the full episodes will be released. Black Mirror started sharing posters, teasers and taglines just after Thanksgiving, but no premiere date has been announced. Season 1 saw a December 4, 2011 drop, so we are holding out hope this season will get an early December release as well.