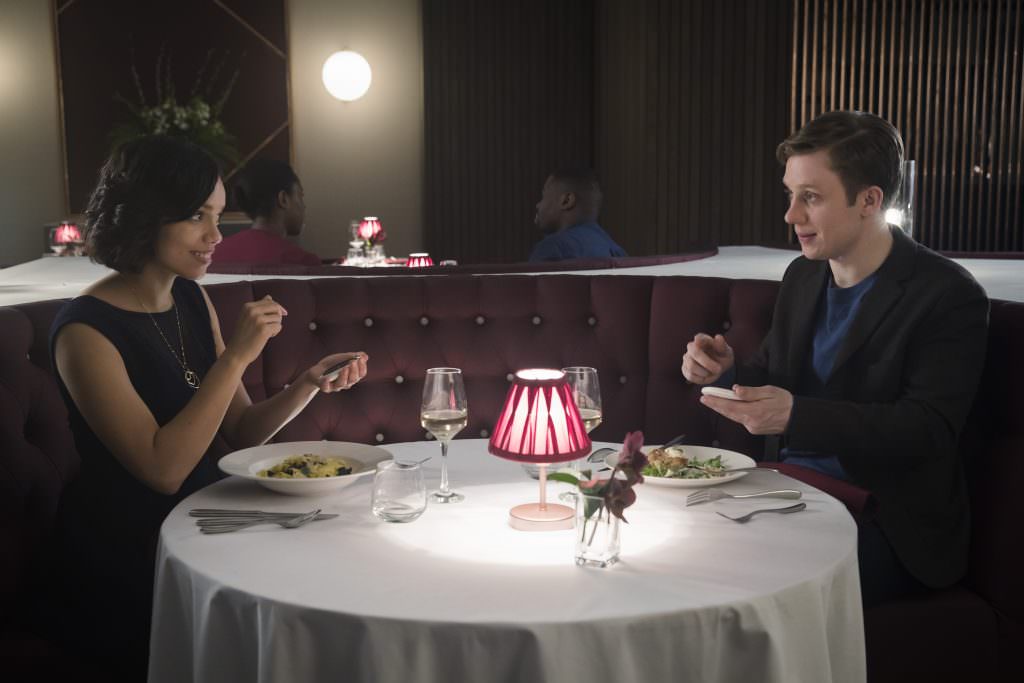 Love them or leave them, online dating apps have changed the way people experience relationships. The new Black Mirror trailer pushes the digital matchmaking system to the extreme. ‘Hang the DJ’ is the fourth episode of season 4 to receive a trailer, and it introduces a wacky new computer system that controls the characters’ dating lives.

Georgina Campbell and Joe Cole play a couple who sit down to their first date. The premise seems familiar enough, but they happen to have a digital system that tells them their “expiry date”, or the moment their relationship will end. The two have a decidedly short time together of twelve hours. Although their friends have had success with the technology, they are still searching for their perfect mate. Campbell’s character comments that dating must have been “mental” before the advent of ‘The System’, but they don’t seem to be any happier than love seekers of our world. As is the case with most episodes on Black Mirror, we suspect this will be a cautionary tale of overly invasive technology being a curse.

The anthology series continues to amaze us with its originality. Each episode this year has so far touched on a new technological paranoia from a women literally controlling the mind of her own child to an investigative system that mines the actual memories of witnesses. Charlie Brooker returned to write all six episodes and co-creator Annabel Jones told The Independent in October that they’re charting new territory this season. “I think all the new episodes in the fourth season all feel very different – there are things we’ve not yet explored and genres we haven’t tackled,” Jones said.

Black Mirror has been releasing teasers of each of the new season’s episodes every other day. ‘Hang the DJ’ joins ‘Arkangel’, ‘Crocodile’, and ‘Black Museum’ as the previews we’ve gotten to see. ‘USS Callister’ or ‘Metalhead’ should receive trailers on Sunday and the final trailer next Tuesday.

We’re still waiting on the elusive release date of the full episodes. The first season premiered December 4, 2011. With the final trailer airing Tuesday, that would bring us to December 5. We’re hoping that in keeping with the early December release date trend, that the full season will follow soon after.