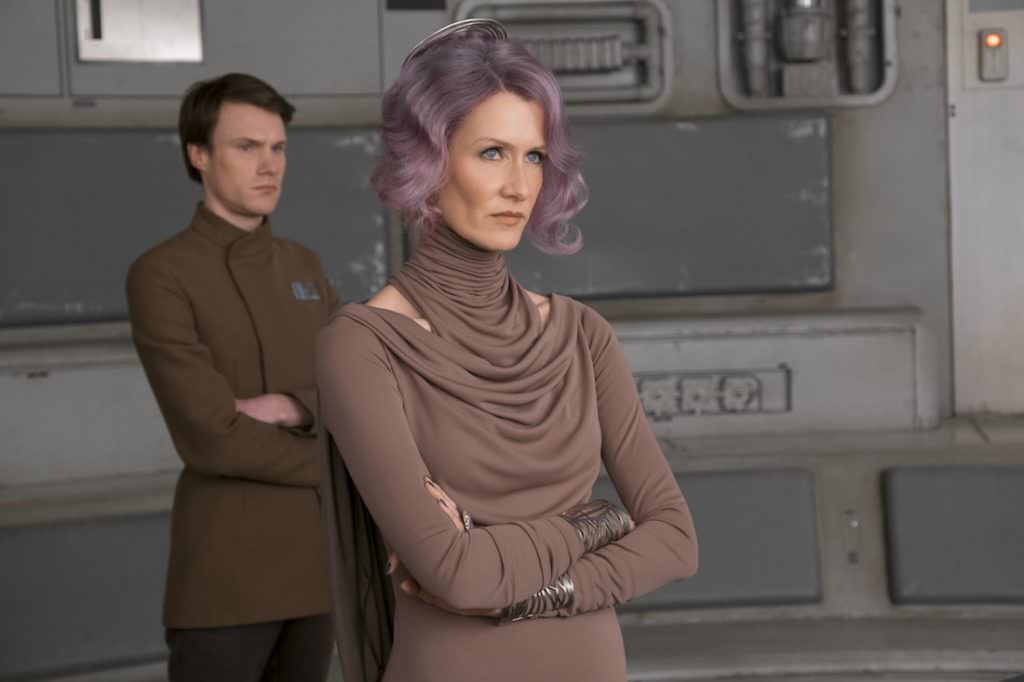 The great Laura Dern was one of the most exciting additions to the Star Wars: The Last Jedi cast, an actress with immense gifts whose presence improves any film. Dern, along with Benicio del Toro’s mysterious code breaker DJ, is not someone you bring onboard your film to play a minor role. As Vice Admiral Holdo, Dern’s playing a prominent officer in the Resistance, and judging by this Entertainment Weekly cover photo of Holdo alongside Oscar Isaac’s Poe Dameron, she’s going to have a lot of say over how things unfold in the Resistance’s quest to crush the First Order, and the people who serve under her might not like it.

Note the caption in the EW cover: “Can Poe get along with his new boss?” Dern told EW that Holdo and Poe’s have a dynamic, charged relationship, one shaped by massive external pressure: “It’s definitely appropriate that they’ve paired us, because a lot of the friction and conflict comes between Poe and that relationship with Admiral Holdo, who is this person that’s been — at least temporarily — put in charge of the Resistance,” Dern told EW. “She enters the Resistance to shake things up. I’ve always worked under her [General Organa] for the Resistance, therefore with Leia being the boss.”

Dern’s saying a lot with a little here, including that bit about “temporarily” leading the Resistance, begging the question—where is General Organa while Holdo’s in charge. It also bears re-watching The Force Awakens to contextualize just how bad of a spot the Resistance is in when The Last Jedi begins, and why Poe might be agitating to fight while Holdo’s strategy involves more patience and, perhaps, tactics the young pilot doesn’t approve of. Yes, the Starkiller base was destroyed (thanks in no small part to Han Solo), but Hosnian Prime was also destroyed, as was much of the Republic Starfleet and the Galactic Senate. Things are precarious, at best, and leadership will be key. The question seems to be what kind of leader is Holdo, and, can she be trusted?

Dern’s Holdo is a striking departure from Carrie Fisher’s General Organa, the latter of whom long ago severed her ties to her princess status and served, in look and in temperament, as the hardened leader of a vast force of Empire-and-First-Order fighting good guys, very much looking the part in darker, drabber attire (Fisher said that Leia dressed like a “fancy gas station attendant” in The Force Awakens). Holdo, on the other hand, especially in the striking photos we saw of her courtesy of Annie Leibovitz’s Vanity Fair shoot, and as seen in the photos here, is striking with her purple hair and long, flowing gowns. Her look isn’t lost on the soldiers she commands.

“She doesn’t particularly look like your typical military leader, and so I think there’s a bit of distrust for Poe,” Isaac told EW. “He’s not sure what to make of her, and then the way she speaks, the things she says.”

Could Dern’s Holdo secretly be a villain? It wouldn’t be the first time the Dark Side had one of their agents right in the midst of the supposed good guys—recall how long Palpatine managed to evade discovery as the Sith Lord while serving in the Galactic Senate. Yet it’s unlikely Holdo is bad, and more likely she’s merely different. Everything reported about her thus far positions her more as an unusually bold leader, one who doesn’t really care if she ruffles a few feathers and raises a few eyebrows. It’s understandable that Poe and the rest of the rank-and-file Resistance fighters (yes, yes, he’s much more than just another Resistance fighter) are eager to do battle now, but from everything we’ve read about Holdo, it seems she’s playing the long game.

In Claudia Gray’s official Star Wars novel “Leia, Princess of Alderaan,” Gray described Holdo to StarWars.com as someone who “sees the world through a prism most others don’t understand.”  The EW story revealed that Poe’s not alone in lacking confidence in Holdo’s leadership in The Last Jedi, so the question will be if the world that Holdo envisions, one that presumably has the Resistance defeating the First Order, is one that those that serve under her can believe in.

We’ll find out just what kind of leader Holdo is when Star Wars: The Last Jedi premieres on December 15.