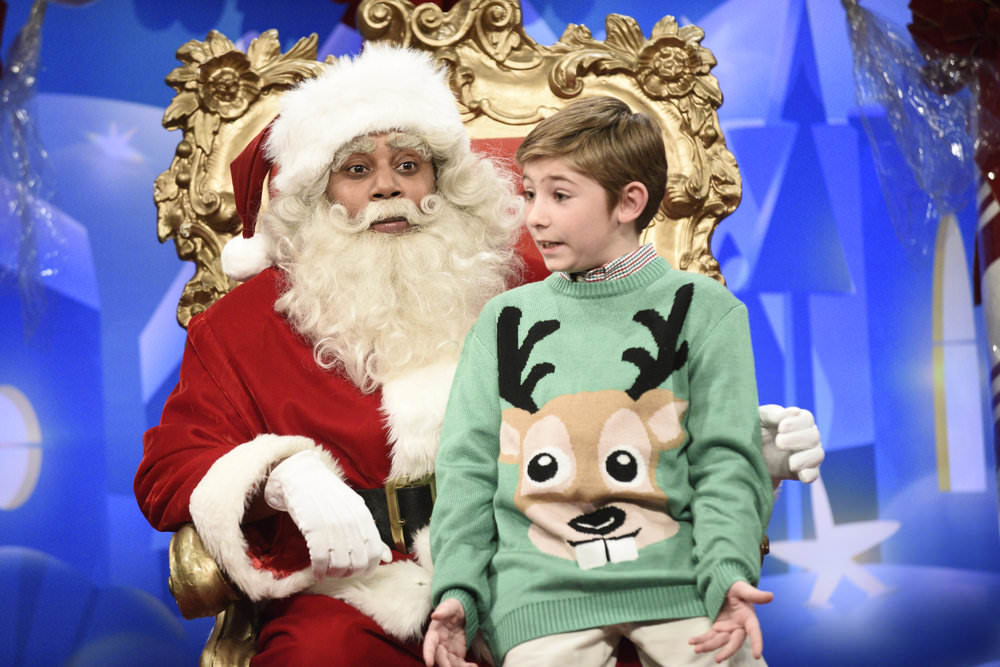 There’s one more SNL episode before Christmas, but Kenan Thompson made an appearance as Santa this week to deliver arguably the most poignant and humorous sketch of the year. As the news cycle continues to descend into chaos and becomes increasingly NSFW each day, Thompson and Kate MacKinnon nailed the depressing climate with a hilarious host of kid actors. The precocious children who were sharing their wish lists with Santa nailed the hypocrisy of our time better than any adult ever could. They got straight to the heart of the sexual harassment fallout, tax reform, football controversies, and more. The names mentioned in the sketch may date the piece, but the sentiment will go down as an all-time classic.

James Franco took on hosting duties for a fourth time this week with musical guest Sza. Seth Rogen, Jonah Hill, and even Steve Martin came out to celebrate Franco who is just shy of the famed Five-Timers Club, of which Martin is a charter member. Rogen and Franco, who have collaborated on several comedic films, argued over the dramatic quality of their films. Franco made the appearance to promote just released The Disaster Artist, which just earned him a Golden Globes nomination.

Although there was plenty of political fodder that was tackled in the cold open and Weekend Update, Franco barreled his way through timeless sketches that stood on their own. Za was a tongue tying piece of wordplay. Picking apart a defendant’s (Pete Davidson) story in which he refers to pizza as ‘Za,’ Franco made the case that Lasagna, not Pizza, is nicknamed ‘Za.’ This one is bound to launch a thousand Monday morning office debates.

Franco also nailed the Monty Python style physical comedy sketch, Gift Wrap. Franco’s paper cut begins to squirt blood then a series of mounting injuries ends on a ridiculous mess that even the cast couldn’t stop laughing at. While the rest of the cast tried to suppress their giggles, Leslie Jones was visibly disgusted adding another level to the hilarious skit. Over exaggerated injuries is almost always a win.

Newcomer Heidi Gardner is emerging as the fresh face to watch. She appeared in several sketches and even had a starring role as Franco’s cousin, Pretty Mandy. Gardner made her first step into the limelight earlier this season as Angel, Every Boxer’s Girlfriend from Every Movie About Boxing Ever. The character was well received and proved she could take on bigger roles.

Kevin Hart and the Foo Fighters will finish out the year on December 16.

Featured Image: Kenan Thompson as Santa during “Visit with Santa Cold Open” on Saturday Night Live. Photo by: Will Heath/NBC