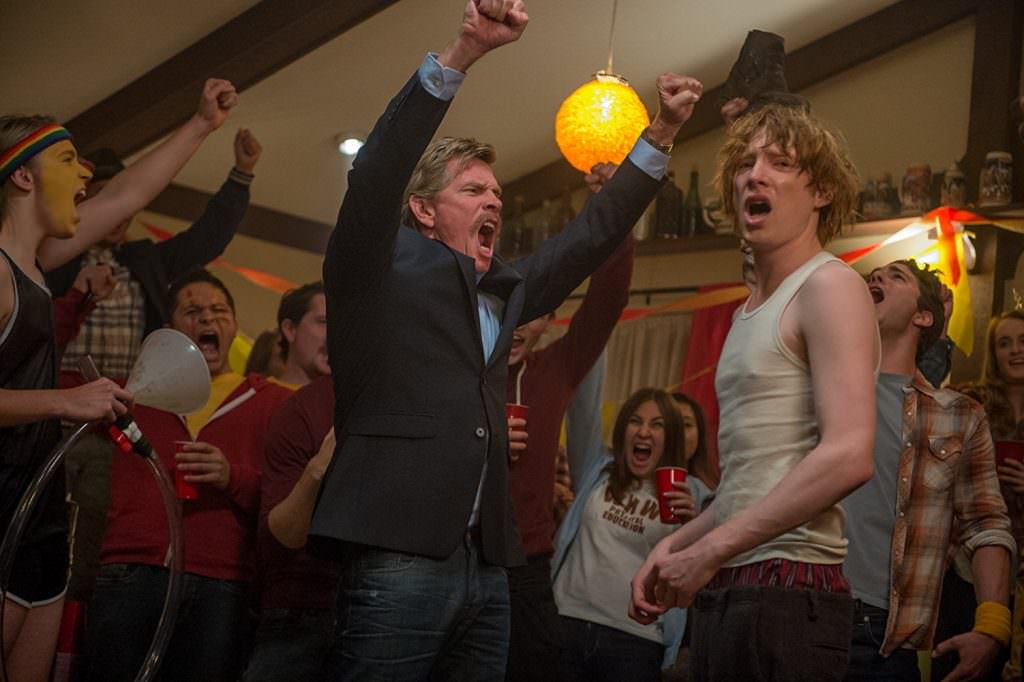 If you’ve seen Sideways, About Schmidt, The Descendants, or Nebraska, you’re likely headed to the theater this weekend to see Alexander Payne’s newest project Downsizing. You have also seen the work of longtime collaborator Kevin Tent who has been the editor on all of those movies and more. After years of collaborating with Payne, Tent stepped out on his own to direct the neurotically funny Crash Pad this year. Stensland (Domhnall Gleeson) and Grady (Thomas Haden Church) bond over being betrayed by the same woman (Christina Applegate). As Stensland learns he’s emotionally immature for the romance he sought, Grady revisits his bachelor days and the two meet in the middle. It’s a sharp, quick witted, and quirky bromance movie that has shadows of Payne’s influence, but Tent finds a voice all his own.

We spoke with Tent about stepping into a new role, how his years on set prepared him for the directors’ chair, finding comedy in sadness, and more.

What about Crash Pad spoke to you and made you decide it should be your directorial debut?

First of all, I knew I wanted to direct something and I thought directing a comedy would be fun to try. When I read Jeremy’s [Catalino] script, which is sort of based on a true story, I just thought it was so funny. I thought the characters were just so funny and weird and quirky and enjoyable and that’s kind of what drew me to it. I just wanted to hopefully make a funny movie. Not with a big agenda or anything like that, just something kind of funny. So that was the goal.

In this era where people tend to grow up slower, it’s really relevant.

Right, I think that’s so funny. That really goes back to Jeremy and he wrote those things and that was him at the time. He wrote the script about ten years ago at least, so it’s been kind of kicking around for a while. It took us a while to get it made. I think those themes are happening today too.

What was your overall vision when you sat down and started to shape the film?

I didn’t have a super specific vision but I did it for very little money, relatively speaking. I wanted it to look relatively professional and slick and not look like a low budget, independent film. I wanted it to be reminiscent of old 1940s comedies. A little free, not taking itself too seriously, light and that was my goal, to make something like that. A friend of mine gave me the greatest compliment who, when he saw it, he goes, “It’s like if Cary Grant and Rosalind Russell could swear, this is the movie they would make.”

Your characters do speak really quickly like a Katherine Hepburn film. How did you get that timing just right?

I have to give a lot of credit to Domhnall Gleeson who is just phenomenal in the movie. I told the guys I wanted to make it really fast and zippy and they were like okay great. Domhnall is such a good actor that he could deliver those lines. Those are some real tongue twisters in there. It’s what Jeremy wrote, and Jeremy is such a good writer, and Domhnall totally nailed them. He was able to spit them out really quickly. All the actors did it, which was great. Thomas was kind of funny too because he liked to adlib a lot. His lines are a little slower so we definitely used editing to keep the timing going. But some of his adlib one liners were so funny we used a lot of those too. But most of it is all of Jeremy’s lines that are written and he wrote them and Domhnall delivered them perfectly. You’ve worked on a lot of films, including Crash Pad, that deal with comedy in a bittersweet way. How do you find the funny moments in sadness?

Look at Alexander Payne’s movie. They are so human. I think that’s why they are funny because they are so relatable that you actually feel sorry for the characters that are getting beaten up through life and events. They’re just absurdly funny some of things that happen. Maybe that’s the same with Crash Pad. You feel sorry for him. All he really wants is a girlfriend. He just wanted to be loved and wants to love someone. He isn’t really equipped for everything that happens to him, but it’s good for him in the end.

What did you learn from your years as an editor and working with Alexander Payne that helped prepare you to direct?

I wish I had learned more because it’s such a different job. It was great that I had been an editor all these years. That for sure helped, absolutely. But it’s truly a different skillset to direct something. I was enormously ill-prepared honestly. It was more than I thought. I sort of learned so much on it. But he was a big help. He told me one thing that really helped me a lot when I was on the set. When he’s directing, he listens to how he wants to get a line and if he gets it once in some take, then he knows he’s got it and he could move on. That was very helpful to me. Obviously we had way less time than he had on his movies and everything but I tried to do that. I really just had to do a couple of takes each time for each set up we had because we were so time constrained. Because I am an editor, I wanted to make it fast and funny, so I guess that helped in a lot of ways.

Did you try to jump into the editing room on your own movie?

I definitely left it to the editor, but on the set I would be thinking, “Okay, if that doesn’t work.” Editors can usually figure out some way to get out of anything. There are always tricks in our back pocket that we can go to if we have to. So on the set, I was definitely conscious of if this doesn’t work then we can get out of the scene here, or if this doesn’t work we can come into the scene here. I did know if I really ran into a jam, we could figure out something to get out of it.

That sounds like a real asset to be able to have the vision for what it will look like in post-production.

You’re in such panic mode when you are on the set. I was not prepared for that part of it. In the editing room, you sit, you get your little cup of coffee with you, you watch a couple of takes a few times and realize that’s the take that really is the best and here’s why. You analyze it and come up with a number of reasons why you should go in this direction and you do it. But then on the set it would just chaos for 40 seconds when you do a take and then everyone turns to you and goes, “How was that?” And you’re like, “Ah it was good.” It was just constant. It was moving fast but it was really fun experience.

Would you direct again?

I think I would like to do it again. I think if I find the right project I would absolutely do it again. I feel like I learned so much. I’d have a little more confidence going into again and do a better job than last time, I really do would love to try it again.

Did you enjoy being back in the editing room for Downsizing?

That’s going to be a good one. It’s funny. It’s one of the weirdest movies you’ll see in a long time. It’s still an Alexander Payne movie, but it goes all over the place and gets wacky. It’s really funny and really thought provoking, I gotta say. And not just because I edited it. I think you are going to like it.