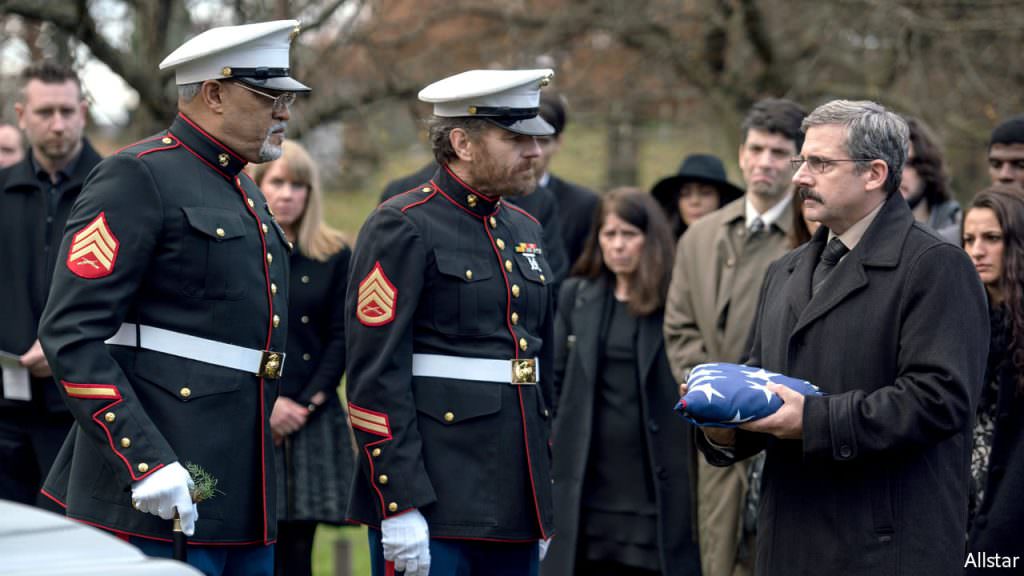 Richard Linklater originally tried to get war veterans’ drama Last Flag Flying off the ground 12 years ago, shortly after reading Daryl Ponsican’s novel of the same. “The timing wasn’t right,” he says. But the timing for the now-completed movie, which opened this past Friday, couldn’t be much more attuned to national concerns. Shot last fall, the film gained unexpected resonance two weeks ago when White House chief of staff John Kelly described the exact same process dramatized in Last Flag Flying, when Steve Carell’s soft-spoken “Doc” character travels with his Vietnam War-era buddies (Bryan Cranston and Laurence Fishburne Jr.) to Dover Air Force Base in Maryland. There, Doc receives the remains of his son, killed in Iraq. Linklater says. “Of course we had no idea this process that happens in Dover would be in the news when we shot the film, but on the other hand nobody should be too surprised. War and politics — those two things always seem together.”

Last Flag Flying begins in a downpour and ends with a young Marine’s burial, but the story remains buoyant thanks to its engaging cast. Bringing together Oscar nominees Carell, Cranston and Fishburne together for the first time, Linklater figured their collective chemistry would keep the story from becoming unbearably mournful. “None of us had worked together before,” Linklater says. “They needed to feel like characters who’d been friends for thirty years so I figured that getting a chance to rehearse would be really helpful.”

About six weeks before production began, Linklater gathered with the three leads in a Los Angeles black box theater. For five days, they talked, ran lines, got to know each other and fine-tuned the script. “Steve might tell me ‘That doesn’t sound like something Doc would say,’ and I’d go, ‘You know what? You’re right’ and I’d change the line. Sometimes things that work on the page just don’t sound right coming out of an actor’s mouth. You have to trust the people you’re working with, listen to their ideas and sometimes change things to make the story work.”

Once filming got underway in Pennsylvania, Linklater continued to huddle with the actors on a daily basis. “We’d get together at somebody’s trailer every morning while the crew was setting up, or while they were in hair and makeup, or whatever, and we’d talk through what we were going to shoot that day. It’d be like, ‘I know we rehearsed this six weeks ago, but how do you feel about it today?”

The trio’s contrasting personalities, especially Cranston’s wise-cracking live wire character “Sal,” enabled Linklater to vary the ebb and flow of emotions. “These characters all went through the same experience together but each one has reacted to it in different ways,” Linklater says. “Sal’s really excited about this road trip because the time he spent in Vietnam were the best years of his life. It’s just the opposite for Doc and Laurence’s character Mueller.”

To set the stage for the veterans’ bittersweet reunion, Linklater teamed with longtime collaborators including cinematographer Shane F. Kelly and editor Sandra Adair, who stepped outside her wheelhouse to recommend Levon Helm’s plaintive Americana ballad “Only Halfway Home” as soundtrack for the film’s climactic burial scene. “It was really important to get everybody on the same page as far as tone and texture, everything from the music to the cheap hotels these guys stay in,” Linklater says. “One of the things I talked to Shane about is that I didn’t want any sunlight in this movie. For just about every scene, it was either raining, or about to rain, or it just finished raining.”

While Last Flag Flying takes an unflinching look at the ravages of war, it also shows how bonds forged during combat can provide considerable balm for ex-soldiers haunted by the past. Linklater says, “The other day somebody told me the movie seemed like a celebratory funeral. I think that’s a pretty good way to describe this film and it’s my kind of my worldview. I see life as being kind of sad, but with humor on top of it. With Last Flag Flying we’re really celebrating life as much as anything else.”