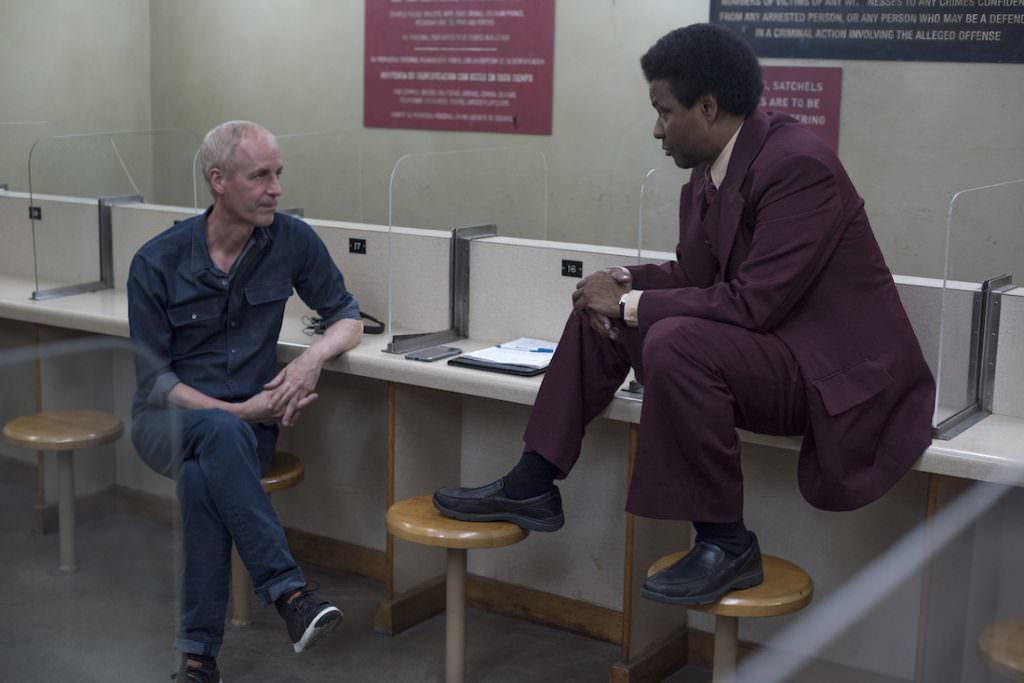 Writer/director Dan Gilroy “can’t conceive of directing a movie I didn’t write.” Although Gilroy has written a number of scripts for other directors  —  from 2012’s The Bourne Legacy to 2017’s Kong: Skull Island  —  he says that the ones he chooses to direct himself tend to be more personal.

“If I’m going to spend a year of my life on something it’s got to be personal,” he told The Credits.

Gilroy had such a personal connection with his new movie, Roman J. Israel, Esq., that he only wanted one actor to play the title character: Denzel Washington.

But that’s not how it worked out. Washington agreed at his first meeting with Gilroy to do the film, about a civil rights lawyer who is struggling with modern changes to the business. They agreed on a handshake while Washington was shooting Fences, which went on to earn him an Oscar nomination for best actor.

“You rarely read a script where you go…” Washington snapped his fingers to illustrate his reaction to Gilroy’s script, speaking at a panel in Los Angeles in early November.

Washington also co-produced Roman Israel, and worked closely with Gilroy on a re-edit of the film after it premiered at the Toronto International Film Festival earlier this year.

“I authored the character; he created the character,” Gilroy said of Washington, who came up with details like Roman Israel wearing shoes that were two sizes too big.

Gilroy, who was Oscar nominated for his best original screenplay with his only other writer/director credit Nightcrawler in 2015, is from a family of writers and filmmakers. His father is a Pulitzer Prize winning playwright; one of his brothers is also a screenwriter and director; another brother is a film editor. Gilroy studied English literature at Dartmouth.

Gilroy also knows a few things about balancing creative process and marketability, and acknowledges that his two most personal films  —  Nightcrawler and Roman J. Israel, Esq.  —  are a tough sell for a big studio.

“Nightcrawler had some level of social commentary in it,” he said. “In this one, I wanted to get into the idea that we should honor and cherish and be in awe of people who want to make the world a better place.”

Gilroy said that rather than “writing what he knows,” he gets his writing ideas externally. The majority of his writing process is actually research. He said he spent over six months researching Roman J. Israel, Esq.

“I look at it like gold prospecting. It’s not really about the act of writing it’s really much more about the idea,” he said. “What you really want to do is take the idea and really go as deep with it as you can.”

He set the movie in Los Angeles for practical reasons. The court system there is “very busy,” but additionally, “it becomes a big plus to shoot a movie here” because a lot of people who work in film live in LA and are eager to sign onto a movie that’s local.

Directing is Gilroy’s second passion, and one he said he has studied hard through other craftsmen. Gilroy noted that while script writing is about sitting in a room alone, putting words on a page, the biggest challenge of being a director are the technical aspects.

“It’s not something that, if you haven’t gone to school for it, it comes naturally,” he said. “It’s learning about the visual frame and composing the image.”

He also said that, in comparison to the solitary act of writing, directing involves “leading a large group of people and you have to find how you’re going to inspire these people.” Gilroy said his style is to involve everyone in a process as democratic as possible.

Perhaps that is why, after its Toronto premiere, Gilroy accepted some notes from critics on his film and went back into the editing room to cut 13 minutes of the film, reorder scenes, and change the background music.

“Denzel and I feel this is the definitive cut,” Gilroy said. He said that Sony, which is distributing the film widely, was supportive throughout the process.