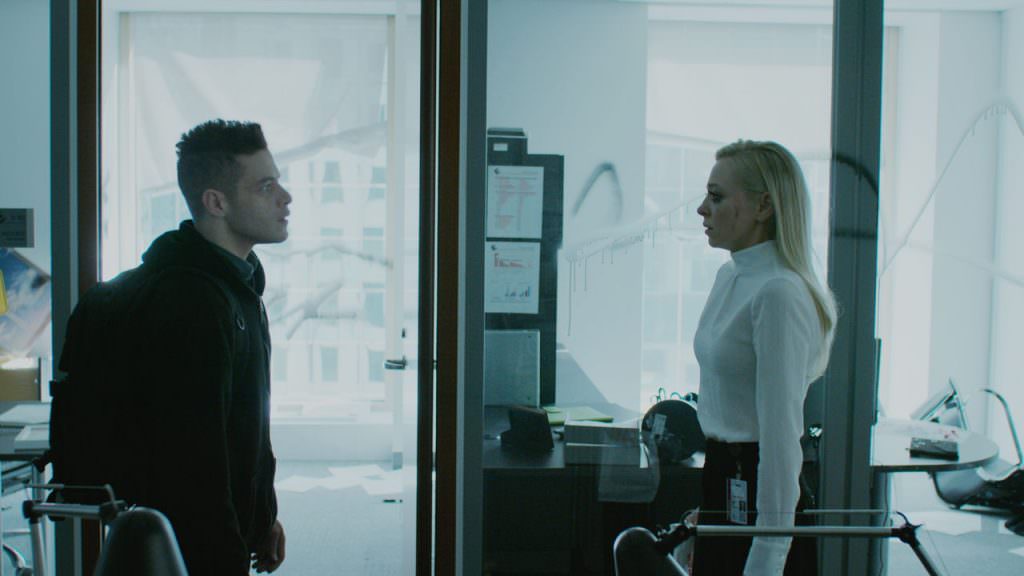 Ahead of its airing, last night’s episode of Mr. Robot was promoted to be commercial free. Famous fan Emmy Rossum channeled all of our curiosity with a pleading tweet for answers to series star, Sam Esmail, asking what was up.

Robot episode 5 is bananas. REAL TIME. @samesmail and the @whoismrrobot crew are committed passionate artists. I can only think about the camera operator and the actors. The effort to get this kind of marathon long take is exhausting.

Esmail declined to give away the show’s secret ahead of time. The answer turned out to be a white knuckle single take episode. The episode was titled runtime-error.r00, but there were no errors here. The episode was nearly flawless. If you thought the show was intense before, that’s nothing compared to when the hack plays out in real time. The episode was essentially an extended chase scene as Elliott (Sam Esmail) ran against the clock to prevent the Dark Army from detonating an entire building. That would be all in an honest day of hacking if he weren’t being chased by building security, which he was.

Beyond the captivating narrative, there’s the massive technical feat of the entire crew that made this episode possible. The 44 minute runtime never cut away. Even the most expert viewer would be hard pressed to note the times that the camera likely cut and was stitched together with another take, but the extended sequences are impressive no less. The creative team was ambitious in taking the most advance hacking story of the season and pairing it with one of the most difficult filming techniques.

Just watching the lengthy take was exhausting. The stress among the cast and crew on set must have been unreal, and their dedication paid off. Mr. Robot is continually pushing boundaries making it one of the most exciting shows on TV.