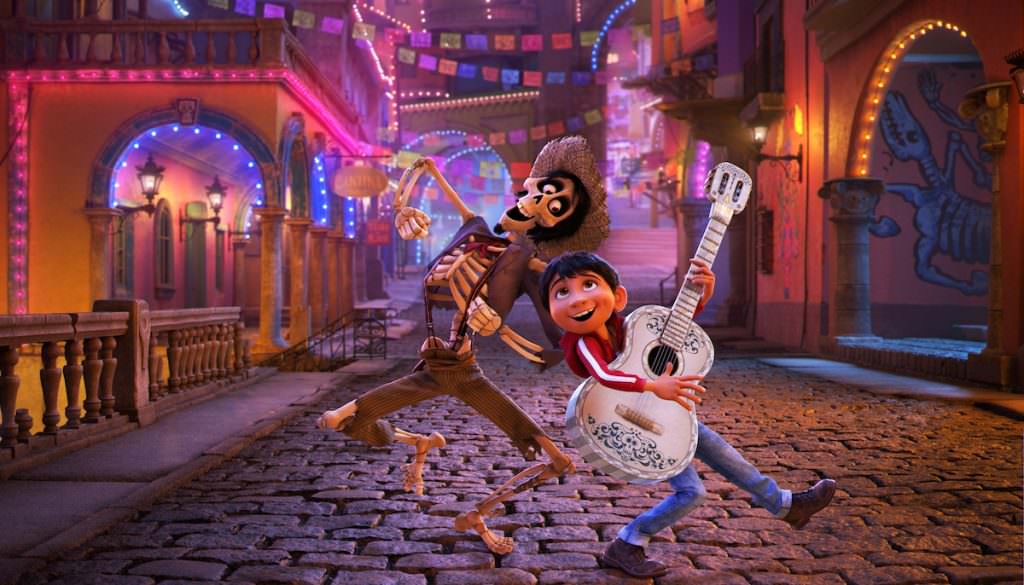 Composer Germaine Franco grew up listening to and playing Mexican music. She knows it’s a rich tradition that goes well beyond mariachi.

“I was raised with that music,” says Franco who hails from the Texas border of El Paso–Juárez (“On Sundays, we went to Mexico for dinner,” she says). Trained as a classical and orchestral musician — Franco holds both a bachelor’s and master’s degree in music from Rice University’s Shepherd School of Music — she traveled around Mexico while in college because, she says, “I had the awakening that I really loved Latin music.” During her time in Mexico, she found a musical culture so vibrant that “I fell in love with all the different kinds of Mexican music,” she says.

That diversity of music is on full display in the songs Franco composed for Pixar’s much-anticipated animated feature Coco. Franco wrote four original songs with lyricist Adrian Molina, who co- directed the film with Lee Unkrich (Toy Story 3). She also contributed orchestral arrangements and various parts of the score composed by Oscar-winner Michael Giacchino (Ratatouille, Inside Out).

Coco may not be billed as a musical but it sure sounds like one. The Pixar-esque story follows a 12 year-old boy, Miguel (voice of Anthony Gonzalez), who dreams of becoming a musician like his idol, the late recording and TV star Ernesto de la Cruz (voice of Benjamin Bratt). After playing de la Cruz’s guitar, Miguel and his dog Dante are transported to the Land of the Dead. Guided by the charming trickster Hector (Gael García Bernal), they set off to uncover the real story of Miguel’s ancestral history, and the reason his family forbids music. Besides Franco and Molina’s compositions, Coco features songs by Oscar winners Kristen Anderson-Lopez and Robert Lopez of Frozen fame.

Franco’s role on the project grew as her work impressed the Coco team. Her first task was to arrange, orchestrate and co-produce one of the key songs in the film, “Remember Me,” a tune that blends folk ballad sound with lively bolero ranchero musical style, written by Kristen Anderson-Lopez and Robert Lopez and a signature song for Ernesto de la Cruz who appears via VHS in a black-and-white TV segment. “It’s a huge production number; kind of Hollywood-meets-golden age of Mexico,” says Franco. “They liked that, so they asked me to do other various arrangements then, at some point, asked me to write some songs with Adrian Molina.”

Those songs include “Un Poco Loco,” a marriage of African and Spanish musical elements, that’s sung by Gonzalez and Bernal when Hector and Miguel find themselves onstage at a talent show in the Land of the Dead and are “arguing and trying to outdo each other up on the stage,” says Franco.

Traditional Mexican folk music is at the heart of the catchy  “The World Es Mi Familia” and “Proud Corazón,” both sung by Gonzalez. Other songs in the film include “Everyone Loves Juanita,” which Franco describes as a simple song, like a limerick, that Hector sings with a bit of raunch. “La Llorona” is a traditional song sung in Mexico during Día de Muertos. “There are so many versions. It is a standard; every musician knows it,” Franco says. “I was given the task of doing a version that Mama would sing. She hasn’t sung in years and then she just goes for it.”

Franco produced, arranged and orchestrated scoring sessions in Mexico City where she assembled 50 Mexican musicians from multiple ensembles and worked closely with producer Camilo Lara of the Mexican Institute of Sound to create an authentic Mexican sound for all the music in the film.

Franco’s role in Coco grew as work progressed on the ambitious project. She scored the first Coco trailer a couple of years ago and from there the team “kept giving me projects. I’d succeed with one and get another. I also arranged and orchestrated the Disney logo as a Mexican symphonic.” Putting that spin on an iconic melody she’d heard all her life was “a huge honor,” says Franco.

Franco says from the beginning the Coco creative team was committed to cultural and historical accuracy, including Mexico’s famous Día de Muertos (Day of the Dead) rituals and customs. “They went to Mexico a few times. If you’ve been to those towns, the attention to detail in the film is amazing,” she says. Franco attended the Morelia International Film Festival in Michoacán, Mexico, where Coco premiered in October prior of its release in theaters. “Audiences were literally weeping, it was so beautiful,” says Franco. “It’s so realistic and beautiful and done with such care. You don’t have to be Mexican to appreciate it. It’s a story about family.”

Franco’s own family fully supported her interest in music as a child. She played drums and piano; then began writing music during her college years when she headed her own eight-piece Latin group that performed in concert. “Those skills transferred to film and theater music,” she says. A Sundance Music Sound Design Fellow, Franco has scored and/or composed songs for films including Dope, directed by Rick Famuyiwa; Margarita, directed by Dominique Cardona and Laurie Colbert and the documentary Walk with Me: On the Road with Thich Nhat Hanh, directed by Max Pugh and Marc Francis, and narrated by Benedict Cumberbatch.

As with all animated features, the long process sometimes meant composing songs without benefit of images, then adding elements once the pictures were finished. Franco says the response and encouragement from others on the Coco team was both essential and inspiring.

“To work with Pixar and Disney is an honor; their system and process invigorates you because you get ideas off other people. You try things — I don’t think I would have come up with [the material] on my own just sitting at a piano. I was stimulated by Lee and Adrian and Darla [producer Darla K. Anderson}. It was a real team effort,” says Franco who two years ago became the first Latina composer invited to join the Academy of Motion Picture Arts and Sciences, music branch.

Her entire career, she says, has been leading up to this moment where her experience and skills are being used for “a greater good.” “I’ve had nothing but wonderful responses from people in Mexico. I just got an email [from a fan] that said, ‘at this point in time, we needed this. I’m so happy to see our music, our heritage and culture celebrated.’ That makes me happy.”

Besides celebrating music and culture, the message of Coco is simple, says Franco. “It’s about loving yourself and taking chances in life. It’s about the moment when you realize what you want.”

Featured image: Miguel (voiced by Anthony Gonzalez) journeys to the Land of the Dead in Coco. Courtesy Walt Disney Studios/Pixar