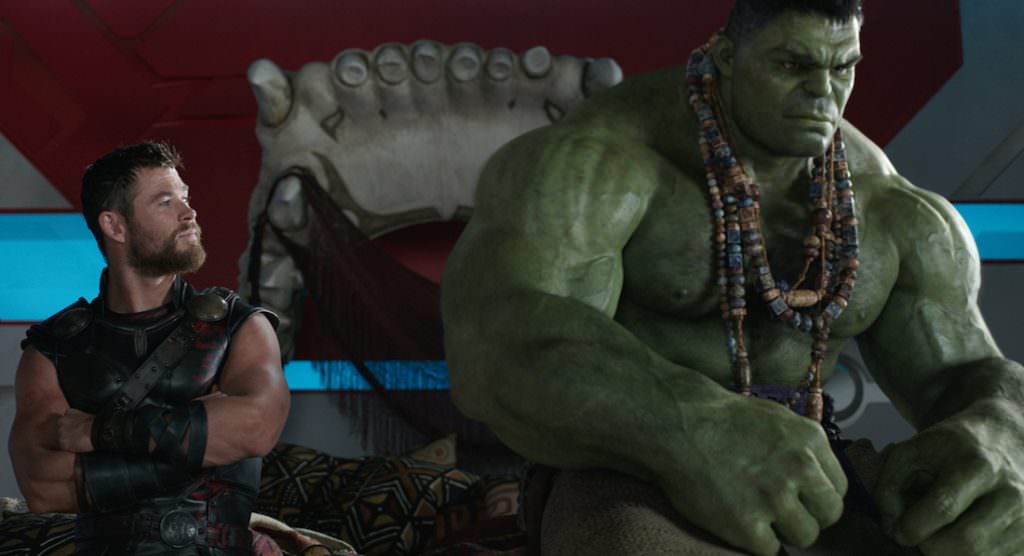 How Thor: Ragnarok‘s Many Laughs led to a Massive Weekend

Thor: Ragnarok is the funniest Marvel film of all time, and this is saying something considering the studio is the decidedly funnier of the two major comic book franchises turned juggernaut film studios, and it they’ve got the likes of Robert Downey Jr. deploying his razor sharp wit as Tony Stark/Iron Man in film after film, and the goofballs of Guardians of the Galaxy crisscrossing the cosmos dropping jokes (and bad guys). Yet Ragnarok now reigns supreme when it comes to funny Marvel films, thanks in large part to writer/director Taiki Waititi’s singular sensibility and a cast that is not only capable of delivering the jokes, but seem to be having as much fun as the audience is in their execution. On top of the film’s sense of humor, which is evident in the very first seconds and lasts until the very last, Ragnarok is genuinely exciting and lovely—it’s a burst of color and emotion and offbeat charm, no small feat considering until now, the Thor films were always the dreariest in the Marvel canon. These are the main reasons that Ragnarok had a massive opening weekend, hauling in $121 million, more than was estimated. Marvel films always do well, but the level of freedom Waititi appeared to enjoy made Ragnarok something unique, and it’s so clear that Waititi, his cast and crew had a ball making this film that it’s spilling over into the way the rest of us are talking about it, likely leading to some serious staying power as Ragnarok carries on into its second weekend and beyond.

Chris Hemsworth’s comedic timing is so spot-on you wonder how Thor won’t be the resident joker in all upcoming Marvel films. If there’s a moment as funny as Thor describing the mean “prank” (read; attempted murder) that Loki pulled on him when they were kids in any Marvel film, we can’t recall it. Yet Waititi surrounds Thor with characters who are witty, self-aware and biting. It’s no surprise that Thor’s brother, the God of Mischief himself, Loki (the always excellent Tom Hiddleston) would steal some scenes, but truly, in Ragnarok, every scene is up for grabs, and every character gets a moment (or more) to shine.

This is obviously true of Mark Ruffalo’s Hulk, who speaks more in his Hulk form in Ragnarok than in any previous film, and whose behavior is that of a very big six-year old. It’s certainly true of Tessa Thompson’s delightful, drunken, fierce Valkyrie, a character all but screaming for her own film, and one Thompson plays with just the right amount of bitter wisdom. But even the bad guys and minor players get big laughs. Cate Blanchett is delightful as Thor’s obscenely powerful (and brutal) sister Hera, the Goddess of Death, a villain whose beef with her family is such that she’ll happily murder them all, but not before a few put downs.

Naturally Jeff Goldblum is funny as the psychopathic Grandmaster, but he’s also genuinely menacing, which gives all the scenes on his planet of Sakaar an unpredictability. He’s funny, but also completely insane.

Truly minor characters make major impacts on the film, including Skurge, who, played by Karl Urban, gets so many good lines you’d be mistaken for thinking he was one of the leads, and Korg, voiced by Waititi himself, a giant rock monster/alien with a heart of gold and a surprisingly high, Kiwi-accented voice.

While the film is as action packed as any Marvel film, complete with the requisite connective tissue to the MCU, including all the easter eggs and post-credit scenes we’ve come to expect, Ragnarok is also a wild, silly, hilarious film that stands on its own two feet, and happily gets lets those feet stumble and pratfall, to the delight of the audience, before delivering the rousing butt-kicking that marks the end of any superhero film.