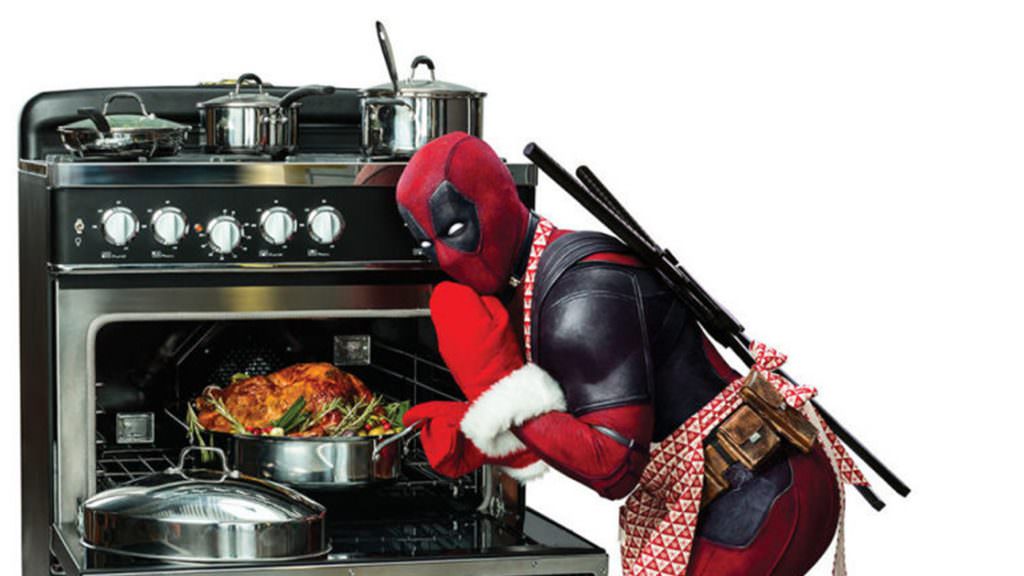 Deadpool‘s Definitive Guide to the Holidays

Good Housekeeping wants you to celebrate Thanksgiving Day the Deadpool way. Lifelong loyalists of the lifestyle magazine are in for a surprise when they open up their mail to find the foulmouthed antihero gracing the cover. Where there are usually smiling chefs and picture perfect place settings, Deadpool appears with a machete on his back – presumably to slice the turkey, of course.

The surprising partnership is a hilarious issue filled with racy jokes and Deadpool’s raunchy humor. The cover promises to deliver “Turkey Tips: Give Your Famly the Bird” and “You’ll Go Crazy for D’s Nuts” on page 160. The Deadpool authored welcome letter even has to be bleeped for his foul mouth. You can put him on the cover of a magazine, but you can’t make him behave.

Deadpool actually does have some skills. Carving a turkey isn’t easy, and he will even help prepare you for what to do in the event of a zombie turkey apocalypse. His tree trimming skills are excellent, if unorthodox. He opted for ammunition and grenades for ornamentation.

Deadpool’s takeover of the traditionally wholesome magazine is inspired. The recipes and tips are real, but Deadpool’s humor is infused in each. Good Housekeeping is a great sport, playing along with the character.

“Deadpool’s persistence to be in Good Housekeeping was impressive – initially we had no idea who he was, let alone that he was a fan of the magazine,” says Jane Francisco, Editor in Chief, Good Housekeeping. “But after repeated attempts to ignore his… passion… we came to a compromise. He could appear in one issue, if he promised to stop leaving care packages at our editors’ homes and agreed to maintain a 50-foot distance from the Good Housekeeping offices and our staff.”

Who knew Deadpool was such a cooking enthusiast?

The issues are actually limited release and are popping up in certain cities. Collider was able to snag one and share the clever contents. Check it out for the rest of the irresistible spread.