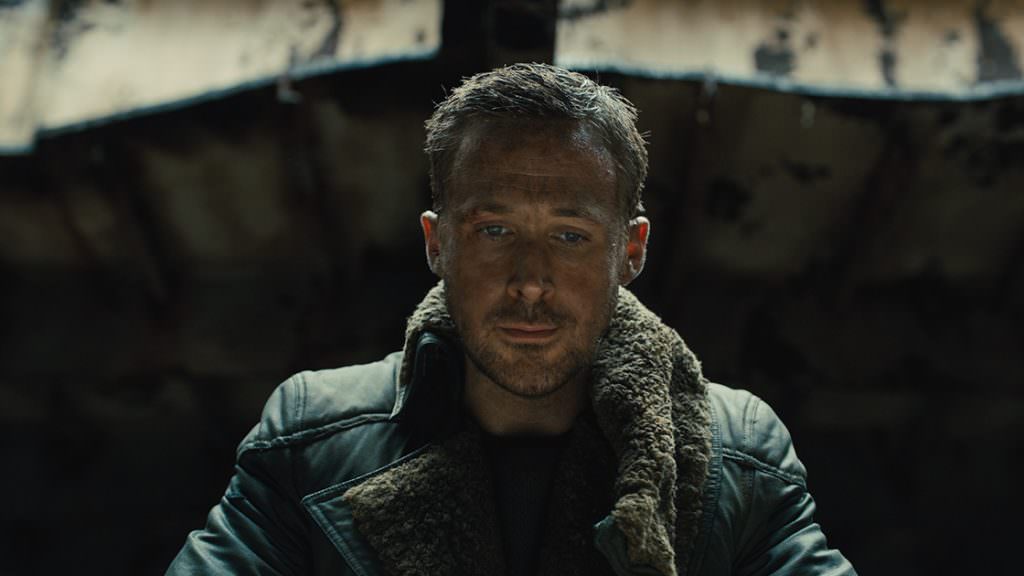 Revisiting the world of Blade Runner decades after the original movie drove the filmmakers to look 30 years farther into the future of Rick Deckard’s (Harrison Ford) world. The world of Blade Runner: 2049 is one of incredible technology and a completely ravaged environment, where massive holograms lope around a lurid Los Angeles slicked with acid rain and ashy snow. A Blade Runner by the name of K (Ryan Gosling) works on behalf of humans in the same capacity Deckard had; he hunts down old replicants and “retires” them. Only unlike Deckard, whose humanity remains the central mystery of the Blade Runner universe, K is immediately identified as a replicant. It remains difficult to tell humans and replicants apart. One man who knows the difference is the film’s makeup designer, Donald Mowat.

Ever since the original 1982 movie was released, there has been debate over which characters are human and which are replicants. Mowat said that some of the replicants’ identities will always remain a mystery, but there are small variances. To truly understand the relationship, however, is to know what makes replicants more human. “The replicants don’t necessarily have to look perfect,” Mowat said. “We took an approach of there being a more human quality to them. I would say to myself, ‘Why does the replicant have facial hair or why is the replicant bald?’ Well, it’s replicating every condition of the human being physically. There are a couple of giveaways that I can’t say. I don’t think that it’s cut and dry.”

There is a real danger in predicting the future, particularly in film. Stories only age as well as the filmmaker’s ability to accurately capture human advancement, or regression. Mowat and director Denis Villenueve had ongoing discussions about the look their characters would have in the world of Blade Runner. “We were talking about androgyny, about what this future will be,” Mowat said. “Of course, I get petrified, because if you start doing that and you start thanking what the future will be, you end up looking like a bad 60’s movies.”

As the style of the film developed, Mowat was cautious not to overdo it, but there was one thing that he was sure did not belong in the world of Blade Runner: 2049. “I did say to Denis, ‘Promise me no tattoos. We cannot do tattoos.’ If I see another tattoo in a movie, I won’t make it. It’s not interesting anymore. He agreed.”

The world of Blade Runner is gritty and competitive. Technology has advanced, but resources run low, and being a replicant alone is dangerous. Mowat reasoned that the characters would have less time for art and self-expression. “Maybe none of that exists and people are just trying to live. So [Denis] really let me do it and we had fantasy type makeup on the girls, but then there’s a kind of realism, almost a western. Ryan Gosling was so fantastic. He was kind of a Clint Eastwood- like loner. He had stubble in a dirty world, because maybe the future will have no water.” 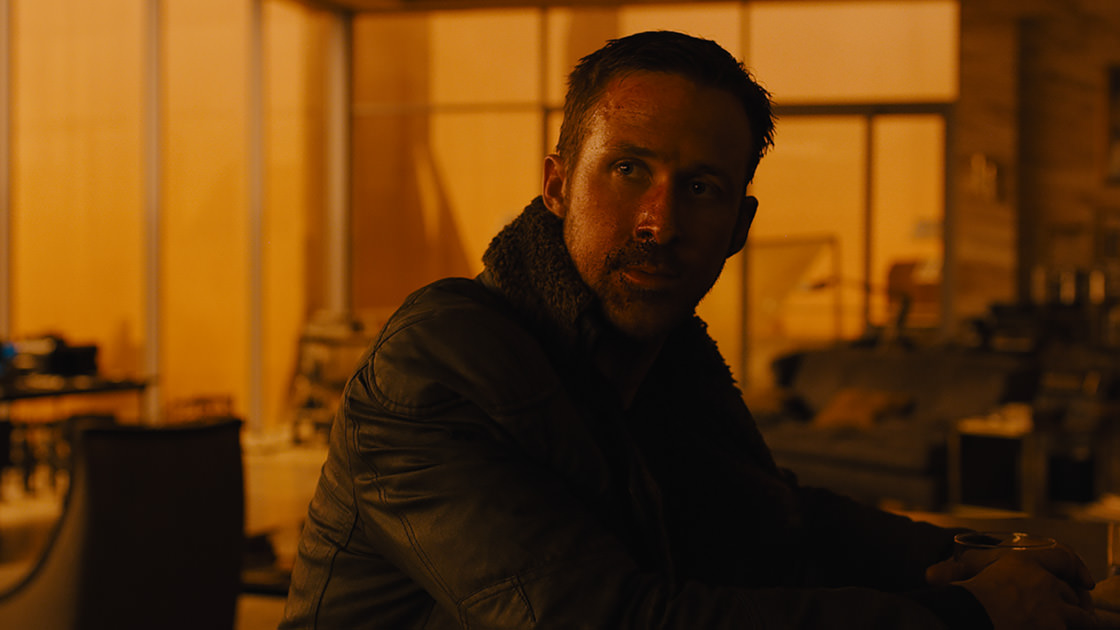 Being a Blade Runner is a rugged job. Part outlaw, part hired assassin, K risks his life to kill his targets—nowhere is this more evident than in the very first scene, where he’s tasked with taking on Sapper, a huge, and hugely powerful, replicant played wonderfully by Dave Bautista. Their fight is brutal, and Gosling’s K bears the marks from it throughout the film, but unfortunately for Mowat, these scenes were not shot chronologically. “The hardest thing in Blade Runner was working out of context and chronology. I had to come up with what Ryan is going to look like after this by the seat of my pants. I say, ‘What do I do here? We haven’t shot the fight.’ It’s coming up with things that are plausible. I don’t want the audience to go, ‘Where did he get that blood from?’”

Having a brilliant creative vision is one thing; turning that vision into reality is what separates the dreamers from the filmmakers. For Jared Leto’s character Niander, for example, his blindness is a major part of his character, and this needed to be evident to viewers in a way that was arresting and strange. Mowat had to find a solution that was comfortable for the actor as well as achieve the otherworldly look that Niander has. The logistics of making a concept a reality can be daunting. “The contact lenses have to get made in Los Angeles, and there’s only one woman who paints them because it’s salt-water paint. It’s a bit like, what’s that movie? The Devil Wears Prada where she’s got to get the kids a copy of Harry Potter. That’s how I feel,” Mowat laughed. 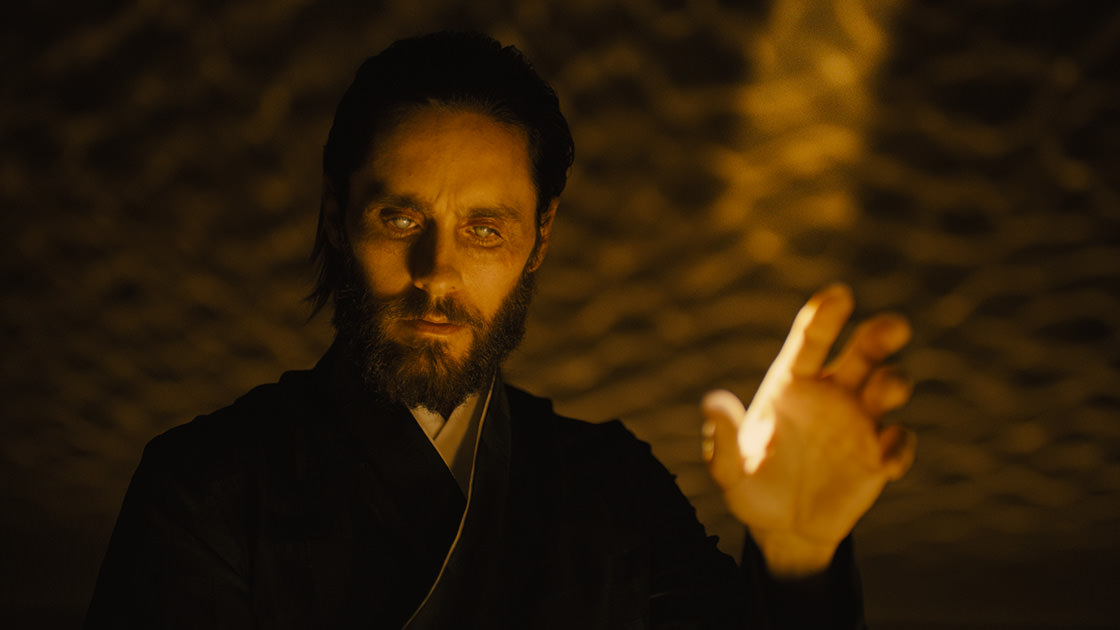 Actor commitments also established constraints for Mowat’s designs. He had an initial look in mind for Leto, one that ultimately wasn’t possible for the actor. “I kind of started to get an idea and Jared said, ‘Well, I can’t shave my beard and I can’t cut my hair.’ There was another make-up concept—it was far bigger. It was a four-hour process it would have needed prosthetics, but Denis looked at me and was like, it’s not that.’”

Leto’s appearance was ultimately conducive to the character. Mowat utilized what he was given to bring out an eccentric and manipulative leader. “The beard actually works quite beautifully, because it reminded me a little bit of a kind of cult or some type of slightly strange Hare Krishna. That world of maybe what a cult might be in 30 years.” 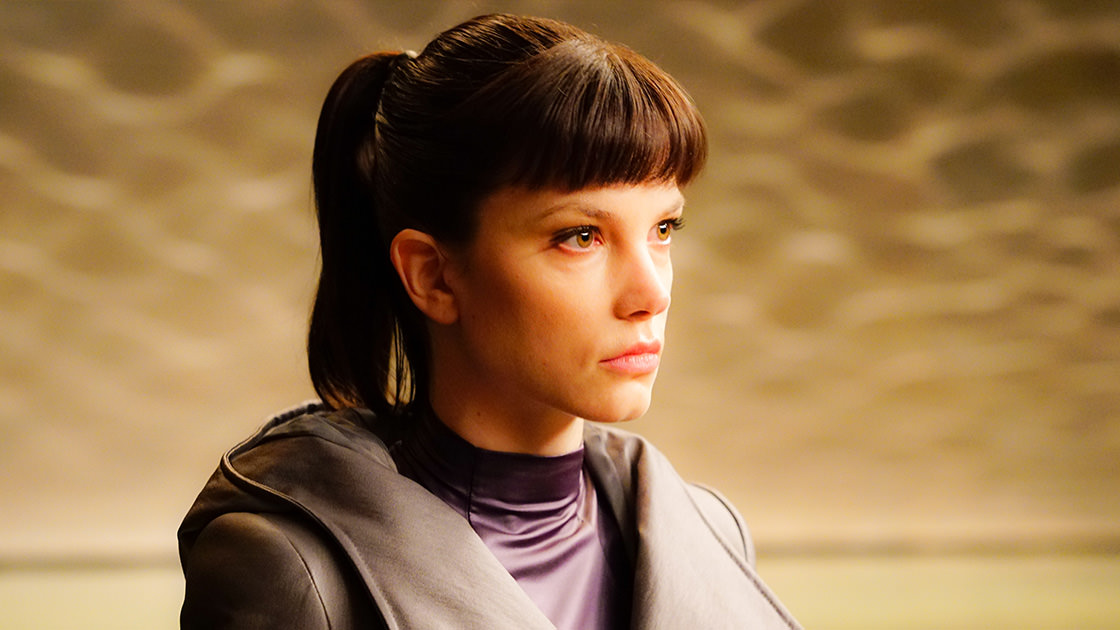 Mowat was careful not to draw the lines of good and bad too distinctly. His career in makeup design has been distinguished by understated and natural looks that help the actor tell the story. Actress Sylvia Hoeks plays Luv, a seductive and dangerous replicant who undergoes arguably the most transformative arc of any character in the film. Hoeks Luv is the wild, raging heart at the center of the film, like Rutger Hauer’s poetic murderer Roy Batty in the original. Mowat was careful not to give her a look that screamed villain, because Luv is much more complicated than that. “We chose quite last minute not to put her in a classic red mouth because Denis said to me, ‘It’s always the witch, it’s always the bad girl.’ And I think that’s absolutely right. The subtlest of make-up changes of not putting the red lipstick is the statement, because sometimes it’s more frightening when they are just trying to look quite innocent.”

Blade Runner: 2049 glides along the narrowing divide between technology and humanity, questioning where the threat truly lies. It’s a debate that is only deepened by the ambiguity of the characters’ identities. The sequel offers no answers, but take another look at Mowat’s work and there may be clues hiding right on the actors’ faces.