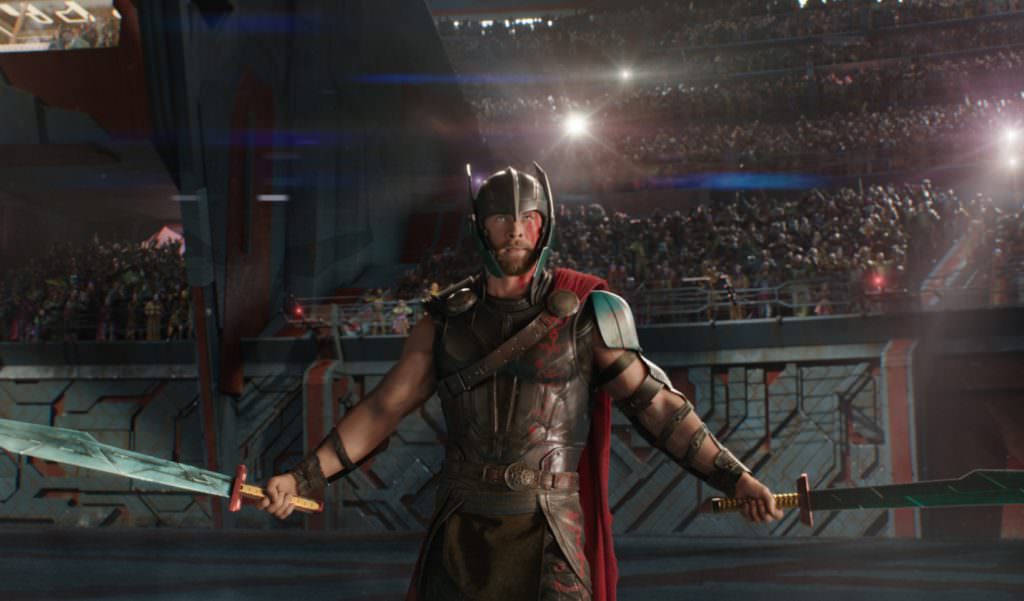 Answering Some of Your Most Burning Thor: Ragnarok Questions

Which means you’ve likely got a few questions after watching Taika Waititi’s hilarious cosmic adventure. While there’s no way we can answer all of your questions, we’ve done our best highlighting the ones we found the most pressing. If you’re looking for clues as to all the film’s Easter eggs, we’ve got you covered. We’ve seen the film twice, scoured the internet (using reliable sources like i09, The Wrap, Collider and Slashfilm) and present you with an abridged list of answers to questions you likely have.

Will Thor get a new Mjolnir?

We saw it in the trailer, and then we saw it happen in the opening minutes of the film; Cate Blanchett’s Hela not only stops Thor’s might hammer Mjolnir in midair like she was catching a beach ball, but she also crushes it with one hand. What we learn by the end of the film, thanks to a ghostly return by Odin (Anthony Hopkins), is that Thor’s power doesn’t come from his Uru hammer, and that all this time Mjolnir was a tool so that Thor could harness and control his considerable godly chutzpah, not its source. This is evident when Thor summons the lightning at the film’s end, bringing the pain (and Led Zeppelin’s epic “Immigrant Song”) down on Hela’s army. (Oddly, in the above photo it appears Hela’s indoors when she snatches and destroys Thor’s hammer—yet in the film, it happens outside, during the day. Hmmm…)

As i09 points out, Thor’s new power is meant to be the Odin Force, which comes directly from the comics and is reserved for the ruler of Asgard, period. The question this raises is now that Thor is the ruler of Asgard and capable of the Odin Force, would he need a new hammer for any other reason than it’s one of the most iconic props in the MCU? We shall see when Avengers: Infinity War hits theaters.

One of the breeziest and best cameos in Ragnarok was Doctor Strange’s brief, hilarious “arrest” of Loki. One second, Thor and Loki are standing in New York, looking for Odin, the next, Loki’s been disappeared and Thor’s being zipped around Strange’s Bleeker Street Sanctum Santorum with a big mug of beer in his hand, all against both the mighty Asgardian’s will. Turns out that part of Strange’s duties is as the MCU’s resident mystical maestro is keeping track of all potentially destructive beings that appear on Earth, and Loki definitely fit the description. Strange eventually helps the brothers find their dad (not before Loki foolishly attempts to kill him), but more than that, he may have revealed how he’ll fit into the larger MCU going forward; any trouble on Earth will have to come through him.

Damon is becoming something of a regular at appearing in films without anyone outside the production seemingly knowing about it. He had a much more substantive cameo in Christopher Nolan’s Interstellar, where he played a stranded, desperate and ultimately dastardly astronaut marooned on a distant planet. In Ragnarok, he’s an actor playing Loki in a stage player that Loki—disguised as Odin—enjoys for its portrayal of Loki as a hero. The other actors on the stage are none other than Chris Hemsworth’s brother Luke (playing Thor, naturally), and the great Sam Neill, a Taika Waititi collaborator (he starred in Hunt for the Wilderpeople) playing Odin.

The case of Thor’s missing eye

As the above photo proves, Thor’s missing eye was cleverly kept out of all promotional material for the film, so it came as a nice jolt when Hela ripped out Thor’s peeper, forcing him to eventually shop for eye patches like his dear old dad Odin. Marvel CEO Kevin Feige told i09 that this was, of course, a conscious decision by Marvel, and one that was fairly easy to pull off. Thor’s eye was removed in post production by CGI in most of the scenes, which meant all Marvel had to do to keep the secret was show us the shots without CGI, which reveal a Thor with not one but two glowing eyes.

The case of the fake the Gauntlet

It’s long been a piece of Marvel lore that in Odin’s nearly impenetrable vault, the Infinity Gauntlet he claimed to have there was a fake. This is precisely what Hela says when she walks through it, confirming that Odin’s been keeping a prop in his vault in an effort to ward off any baddies looking to take it (assuming that the vault is, indeed, impenetrable.)

The Infinity Gauntlet was glimpsed in the background in the very first Thor film, so Waititi needed to not overlook it, but also call out the fact that it’s not the real thing. We know this because in post-credits scene in Age of Ultron, Thanos is clearly in possession of the real one. Odin keeping a fake Gauntlet in order to keep people from bothering to try and steal it was a decent plan, but a little naïve considering the types of “people” who have been looking for it.

Who was in that huge spaceship at the end of the film?

In the first post-credits scene, Thor, Loki, Hulk, Valkyrie and the entire surviving population of Asgard are onboard a ship headed for Earth when a massive ship appears directly behind them. The obvious explanation is this ship belongs to Thanos, and sure enough, as Feige told The Wrap, the ship is called the Sanctuary II, which indeed belongs to Thanos. It’s his flagship, named after the rocky planet where Thanos had set up his throne in the first Avengers film.

As we learned from the Avengers: Infinity War clip shown at the D-23 Expo, Thor is eventually found floating in space by the Guardians of the Galaxy, after, it seems, being a prisoner of Thanos, meaning that the post-credits scene in Ragnarok showing the Sanctuary II creeping up behind the remainder of Asgardian civilization is likely the start to a very bad skirmish.