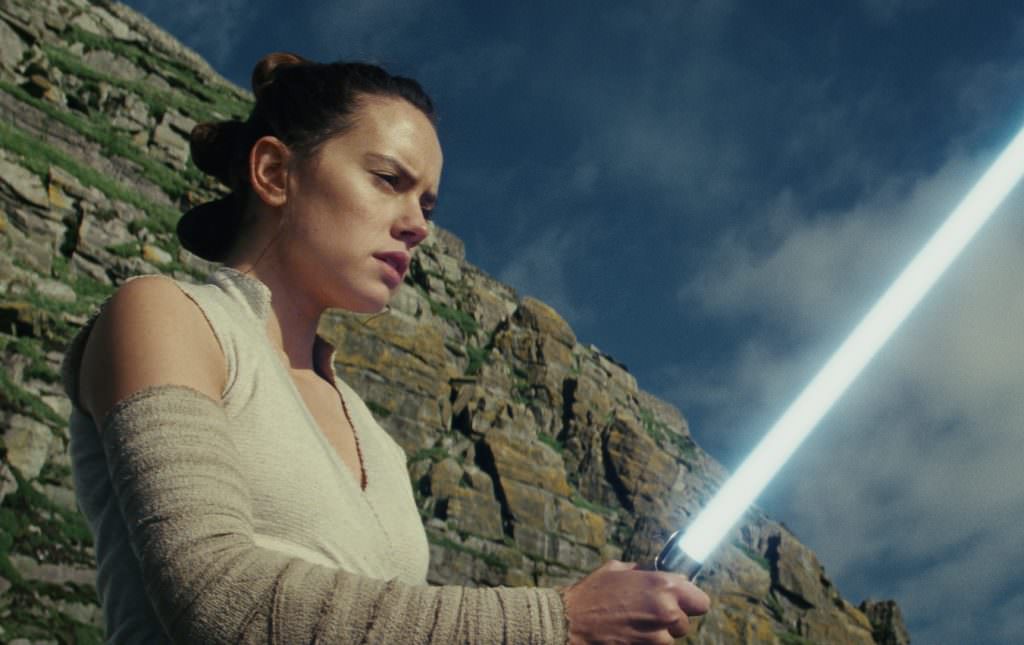 The Secrets Hidden in The Last Jedi‘s New Trailer

The new The Last Jedi trailer has drawn an unsurprisingly huge amount of eyeballs since Lucasfilm dropped it during Monday Night Football, giving us our most detailed glimpse at Rian Johnson’s film and launching the Era of the Porg, with a thousand memes and jokes surrounding the adorable little alien birds that live on the planet Ahch-To (where Luke has been in exile).

Now that we’ve had a chance to absorb the new trailer a few dozen times, its time to take a closer look at some of what we learned.

The Millennium Falcon is chased through a cave by some TIE Fighters, and there appear to be crystals glowing throughout the darkened interior. Courtesy Lucasfilm/Walt Disney

Kyber crystals are the key ingredient to the lightsabers wielded by Jedi and Sith Lords alike. The crystals are scattered throughout the galaxy on distant planets, and, as you could guess, are a big deal. In the new trailer, it appears that the Millennium Falcon and a bunch of TIE fighters are flying through a crystal-coated cave, which may suggest that in The Last Jedi, the sourcing and/or protection of kyber crystals may be a key plot point.  A rumor persists that Luke wears a red kyber crystal necklace in the film, suggesting that perhaps he knows where this cave is, and its one of the secrets he’s been keeping. If this cave is home to massive source of kyber crystals, this would be a major revelation and a place of interest to both the First Order and the Resistance.

The new trailer includes a sequence in which General Organa (Carrie Fisher) seems to sense that her son, Kylo Ren (Adam Driver) is about to destroy her ship. Courtesy Lucasfilm/Walt Disney

Any savvy movie studio will mess with your mind on a film of this scale, especially one in which spoilers are anathema and secrecy is paramount. One of the ways they do this is to cut their trailers in such a way that they present shocking potential narrative twists that that turn out to be total head fakes. In the new Last Jedi trailer, no moment screamed head fake louder than the one in which it seemed that Rey (Daisy Ridley) was about to take the out stretched hand of her mortal enemy, Kylo Ren (Adam Driver). The trailer is cut in such a way that you’d be forgiven for thinking Rey was joining Ren in some capacity, either in an attempt to infiltrate the First Order, or, possibly because she’s joining the First Order. Having read that last sentence, you can see how unlikely both of these scenarios are, which means there’s a far greater chance that the moment was invented, via clever editing, to throw people off.

The same can be said of another Ren moment, this time, the one in which he’s in his TIE Silencer and appears to be about to destroy his mom’s ship. His mom, of course, is General Organa, better known as Leia (Carrie Fisher), and the moment includes voice over of Ren talking about the need to kill the past. While it’s conceivable that Ren would want to finish the job he started when he offed his dear dad, Han Solo, it’s very unlikely Rian Johnson would write that into his story. We’ve already seen Ren murder a parent and are plenty aware of what he’s capable of. It’s more likely this moment was cut together to give us this impression and throw us off the scent of where Ren and Leia’s arcs will lead.

In The Empire Strikes Back, the feared AT-ATs were on the march in the Battle of Hoth, and they were a huge, hulking menace that dwarfed any of the Rebel’s ships or vehicles. Yet, how easily they were ultimately dispatched, with nothing more than a wire flown around their legs. Just like that, the Empire’s fierce battle walkers were sent tripping into the ice like colossal stooges.

It looks as if the First Order has taken a lesson from that history when designing their new AT-M6s. As you can see above, the new vehicles have much stouter legs, with serious armor and even serrated edges on that look designed to cut through any attempt to trip them up. It’ll be interesting to see how Johnson filmed their scenes, and whether or not the Resistance has an equally clever plan for dispatching them as their Rebel forbearers did with the AT-ATs.

Luke on the Fence

The key relationship in this film is likely that between Luke and Rey. The trailer ratchets their relationship up, giving us yet more indication that Rey’s going to have to work extra hard to get Luke to train her. In fact, when Rey showcases some serious power while on Ahch-To, Luke is less intrigued than he is worried. Here’s their exchange:

Rey: “Something inside me has always been there, but now it’s awake … and I need help.”

Luke: “I’ve seen this raw strength only once before. It didn’t scare me enough then; it does now.”

Luke is likely referring to his failed tutelage of Kylo Ren, which ended in a bloodbath, which means he’s probably not thrilled about the idea of jumping back into the mentor game. Luke seems to believe his exile is good for the galaxy overall, but now that Rey’s arrived and clearly won’t take no for an answer, Luke’s decision on how to help her, or not, will have a major impact for the entire galaxy.

Finn’s Back in the First Order 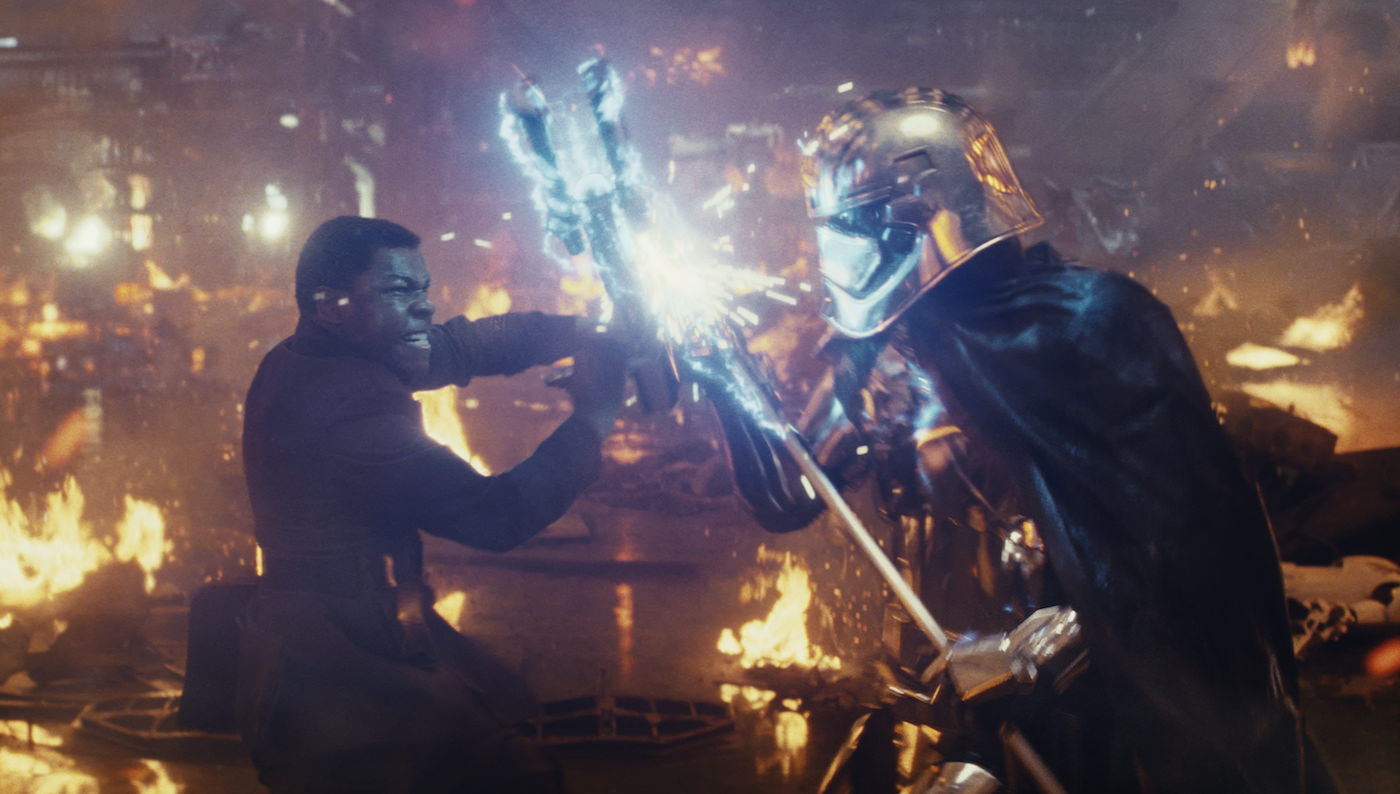 Note Finn’s all black attire, which we see him wearing while flanked by Stormtroopers earlier in the trailer, suggesting he somehow infiltrates the First Order. Again. Courtesy Lucasfilm/Walt Disney Studios

While the major talk surrounding Finn in the new trailer is the explosive clinch with Captain Phasma (Gwendoline Christie) pictured above, earlier in the trailer we see Finn back with the First Order, not as an antagonist, but somehow as a member. How Finn manages to get back inside the First Order is one of the many mysteries glimpsed in the trailer. We know that his journey in The Last Jedi will be a fraught one, as his character becomes an even more important piece of the puzzle in the Resistance’s fight for survival.

We won’t have the answers to these questions, or all the others posed in the latest trailer, until The Last Jedi debuts on December 15. Until then, we’ll keep speculating.