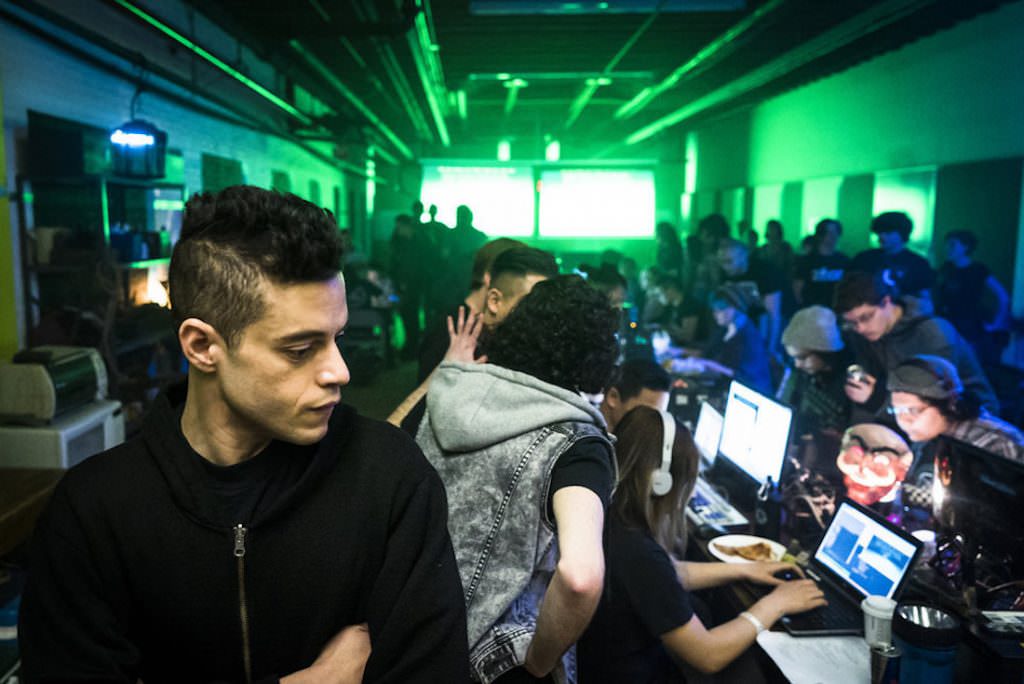 From the outset, Mr. Robot and hacker Elliot (Rami Malek) have been barreling toward a doomsday scenario, so fans of the USA Network show, which began Season 3 Wednesday at 10/9 pm, will be happy to see that things are only getting worse. “The theme for Season 3 is ‘Disintegration,'” says production designer Anastasia White, who teamed with show creator Sam Esmail to implement his vision of a chaotic New York City beset by a power outage. “For the overall look we wanted to create the mood of the dystopian world that Elliot lives in and contrast that with this seemingly undisturbed E Corp environment,” White says. “The story is really about switching tones as we go back and forth between these two worlds.”

White, who started out on Mr. Robot as an art director before taking charge of production design last year, opens the new season inside a fast food joint called The Red Wheel Barrow. One of Esmail’s characteristic inside jokes, The Red Wheelbarrow also happens to be the title of a poem by William Carlos Williams. “Sam likes to get as much meaning and emotion as he can into every still of every scene,” White says. “To achieve that, we try to bring in as many layers as we need into the production design.”

For The Red Wheel Barrow, White, inspired by a Korean barbecue joint, re-modeled a storefront in midtown Manhattan, “Sam told me he wanted it to be a cheesy fast food place, generic but silly and playful at the same time. It’s funny because that’s kind of the complete opposite of the backstory that leads Elliot to his meeting there.”

In characteristic Mr. Robot fashion, details bear close scrutiny. “The Korean fast food place had a cartoon animal as its mascot so graphic designer Eric Bryant sketched a pig’s face,” White says. “Then we started drawing cartoon eyes, and Eric made this sketch of hollow eyes. At first glance it looks, the restaurant looks like it’s decorated with a smiling pig, but then you look closer and his eyes are dead.”

For Mr. Robot Season 3, Esmail continues to furnish Rami Malek’s Elliot with scathing critiques of corporate culture, and this year, he delivers a take-no-prisoners rant while walking one night down a city street brimming with detritus and homeless people. White says, “We had an economics advisor who told us how the city would respond to the aftermath of a hacker attack. We looked at Greece during its bankruptcy, the American Depression, the 1977 blackout in New York City and Occupy Wall Street. Then we picked a block, closed down all the shops, or figured out a way to cover their lights. Then we set up FEMA tents, because it’s a disaster. Small business have shut down and there’s going to be a lot of bartering so we had some kind of vendor trading or selling something outside each exterior.” 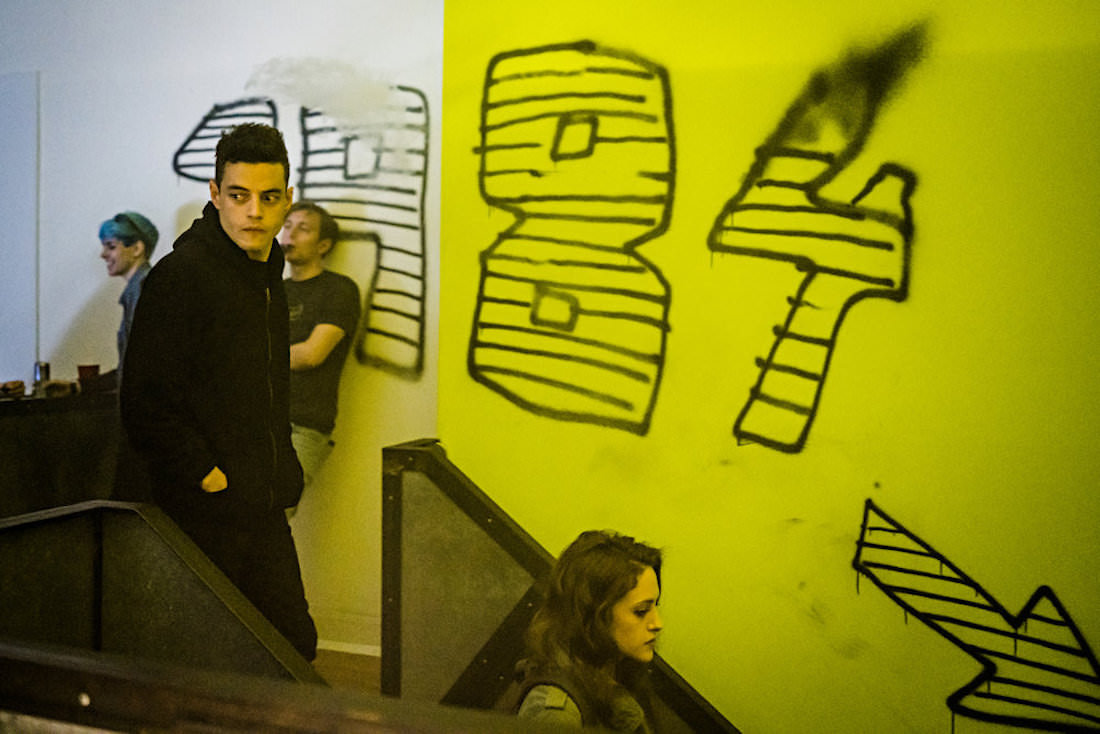 Adding to the chaos, piles of garbage crowd the sidewalk. “We had at least two trucks full of garbage. Our set decorator Kara Zeigon did a very good of putting together this good mix of color, and she had everything pre-aged so it looked like the garbage had been outside for a while and rained on. We also added discarded furniture and broken electronics to show these little vignettes and how people would react to a downturn in the economy.”

The garbage-strewn streets of New York stand in contrast to E Corp headquarters, inhabited by the ruling class one-percenters. White says, “It’s a typical office space because we wanted it to represent all the conglomerates in America. We gave E Corp brightness, cool lighting inside, shiny surfaces and glass, which is completely different from the textures of Elliot’s world.” 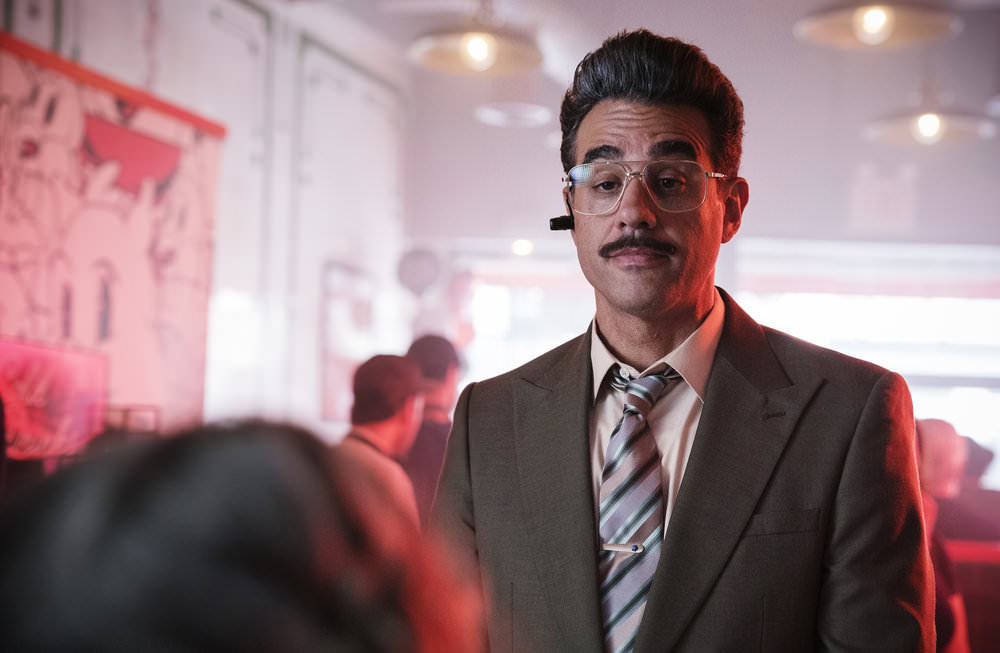 Partaking in the elite lifestyle of the corporate overlords, Elliot’s childhood friend Angela (Portia Doubleday), now an E Corp minion, inhabits an airy aerie high above the garbage. White explains, “Her housing is provided by E Corp so it’s this sleek, shiny, white space in a nice apartment building. It symbolizes how Angela has distanced herself, while Elliot and the have-nots live in dingy places. She’s not really part of that dark world any more.”