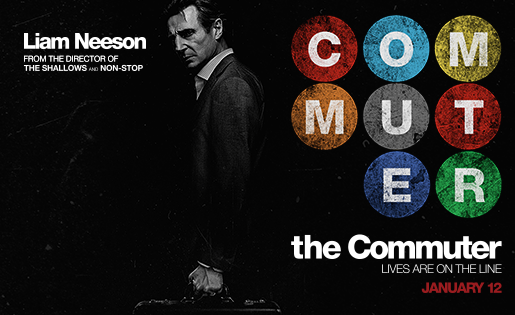 Liam Neeson is in Some Rough Transit in The Commuter

If you think your ride to work is bad, check out the new trailer for The Commuter. Liam Neeson is just a guy trying to get home from work when he’s pulled into a deadly game. Neeson plays insurance salesman, Michael, who is targeted by a stranger, Vera Farmiga (Bates Motel), with a dangerous proposition.

Michael first thinks that it’s merely conversation to kill time on the train, but when someone is murdered before his eyes, he realizes the stakes are real. Joanna, if that is her real name, safely exits the train leaving Michael on board to save his fellow passengers and earn $75,000. The farther he travels, the more involved he becomes in the deadly plot as more travelers give him clues and threaten his family. Knowing Neeson, we’re sure Michael gets to the bottom of this mystery and stops the carnage before the final destination, but it is sure to be one wild ride.

This looks like a spicy thriller to boost up the cold winter months. Neeson is fully in his element a la Taken with a fresh new universe and plot line for fans of that style of thriller. Jaume Collet-Serra, who has collaborated with Neeson on Non-Stop, Run All Night, and Unknown, directs. Farmiga is one of the most gifted actresses in Hollywood right now and Patrick Wilson, the Ed to her Lorraine Warren in The Conjuring series, pops up in a supporting role. We’re going to chalk this up as a solid action flick that we can’t wait to see.

The Commuter rolls into theaters January 12.