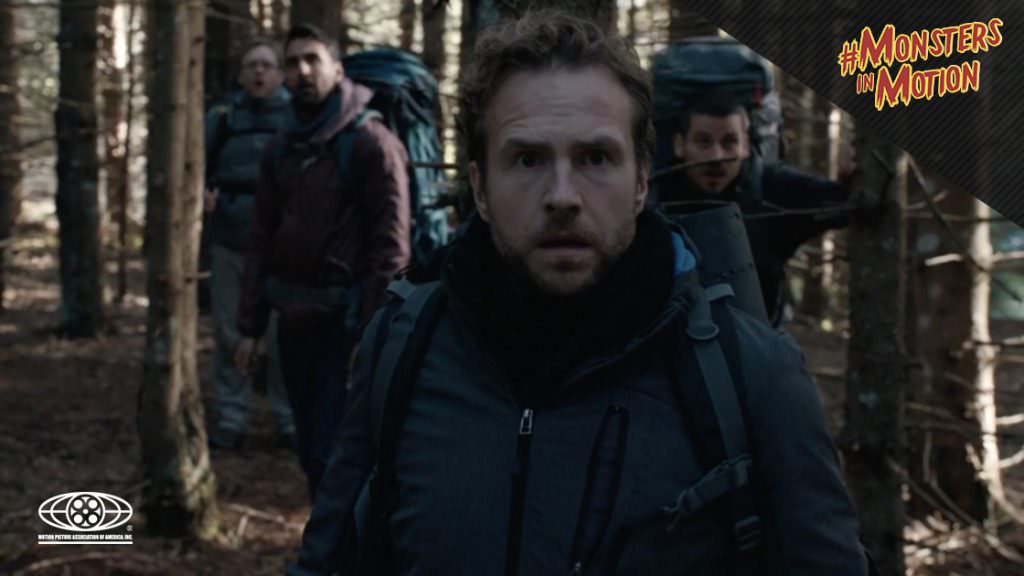 How The Ritual‘s Cinematographer Immerses You in Fear

In The Ritual, a group of friends lose one of their own in a robbery gone bad, but that’s just the beginning of the horrors in store. The atmospheric thriller pulls you deeper into the woods where they encounter sinister things they can’t explain that begin to tear their bond apart. Once they begin to turn on one another, none of them are safe. Cinematographer Andrew Shulkind’s filming style immerses you in the terror in a unique way. As a virtual reality expert who worked on the Emmy winning 360 NBA Follow My Lead, Shulkind knows how to fully absorb the audience in the storytelling. With an original tone among the horror in the wilderness genre, The Ritual is a must see selection this Halloween season.

We spoke with Shulkind about using VR techniques on a traditional film, what scared him most on set, where VR will take audiences in the future, and more.

Give us a preview of what The Ritual is about.

These four guys take a trip to northern Sweden up near Norway and they are trying to mourn the loss of their friend. While they encounter these tragic and scary things, it also hits at the core of what happens to adult relationships as friends start to drift apart. They get married and have kids and their lives change. Then they’re put to some type of extreme test. It’s about what manhood means when you get older, at its core.

One of the most virtual phobias is a fear of the dark. How did you shoot the night scenes so the audience could see the action, but feared the night?

I came up as a camera operator through the ranks in big studio movies and I used to work with Darius Khondji, who is one of the best cinematographers. They call him the Prince of Darkness because he is an expert at lighting for dark. I learned really early on how to light nuanced dark and I think what really changed over the last four or five years has been how what we have been able to do with sensors. Technology has been able to drive entertainment. I think the most evident way that has happened is in the technology tools that we use, whether its color correction becoming more affordable or LED lighting becoming more practical or sensors being able to shoot at a higher sensitivity and being able to work with less light. What we try to do in this was really a deliberate choice to work within the nuances of shadow, which is really something that we haven’t been able to do before. The idea is that you see night all the time in the movies. but there is something about night that has never felt real to me on camera. The idea of this was to really create that faithfully.

How did your experience in VR inform the way you immersed the audience in this traditional film story?

The virtual reality and shooting 360 and putting people in headsets is the next chapter of how we immerse people. Ever since the early days of radio, we’ve been immersing people in stories or plays. It was always about immersing people in an experience. So when television came out, and movies went to wide screen with surround sound, all these different technological advances pushed and allowed you to wrap the viewer a little more completely in the experience. Having shot a ton of those 360 experiences, one of those things is that you wish to see in all directions and we’re lighting of the whole scene. In the non-VR movie, the idea was to use the same tenants and that we’re lighting universally to coverage of directions. We have a balloon for very subtle lighting, and that’s where the sensitivity really helps us because we can hide light and keep things environmental while still being able to look in all directions. 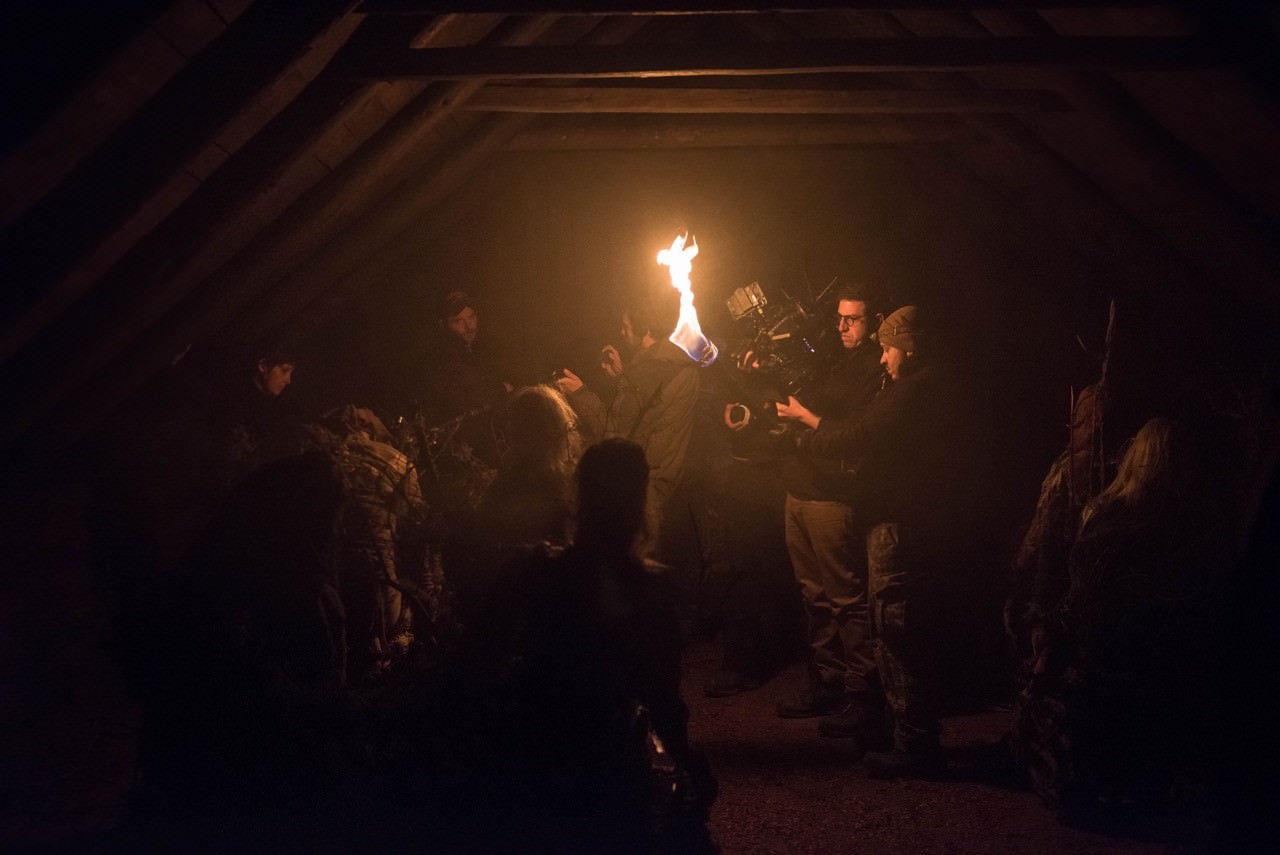 Cinematographer Andrew Shulkind on set of The Ritual.

What tricks did you use to light this film?

The idea is that it is night of course, and there are a bunch of dark scenes. There’s one in particular that’s super dark. So much so that when we were color correcting we wanted to make sure that you could see it if you watched this movie in an airplane. I took a bunch of LED strips and we flew those in because we shot the movie in Romania and it was hard to get. We stapled it to yardsticks and we were able to shoot with so little light that we put these out in the distance when we were shooting a wide shot at night. We plugged them into a 9 volt battery and hid them behind a tree or a bump in the ground. Then with the smoke, we would have enough ambiance to read bodies as silhouettes. It was so crazy how little light we needed that we actually applied dimmers because they were too bright and we had to dial it down.

That sounds really creepy to film. Were there things you shot on set that seemed normal, but turned out really scary in the movie?

Our extraordinary Production Designer, Adrian Curelea, built these amazing sets and one of them was this house that they literally built over the weekend. It was this log cabin. They brought in the lumber from northern Romania and they literally disassembled other buildings to make the building we needed for our set to add a sort of richness of detail. It wasn’t so scary at the time. It seemed terrifying in the movie at night and its freezing and we had special blinds in the house because it’s supposed to be like an old abandoned house. The way that we lit it and the way we let the rain come thru with music and sound effects of the thunder to build the storm made it really terrifying. 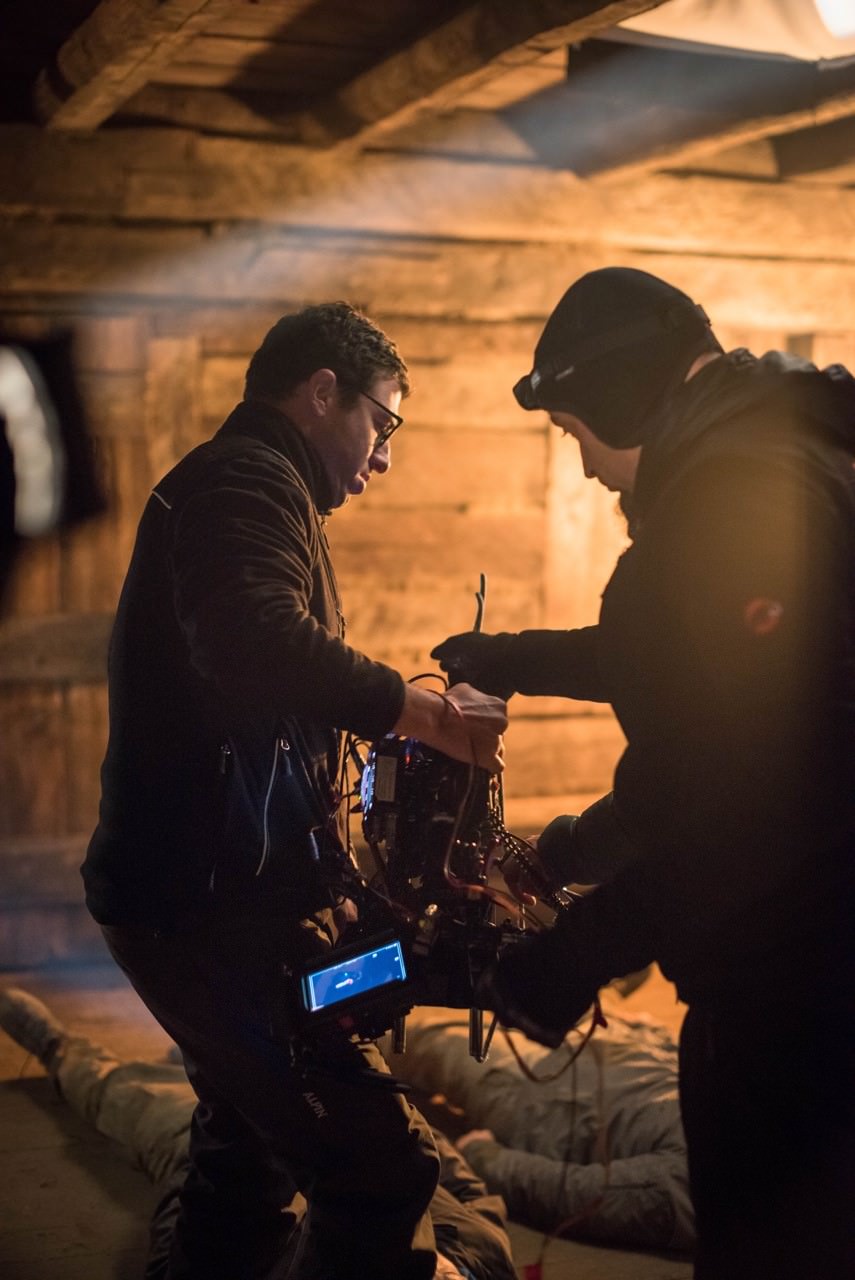 Cinematographer Andrew Shulkind on set of The Ritual.

Was there a time you were truly spooked on set?

Romania has the biggest bear population in Europe and so we had to hire snipers that were lurking around because we were shooting a lot at night. The snipers are hanging around just outside the shadows of our lights. At one point, we are shooting a POV and the light falls off to shadow deep into the forest. I’m using a long lens and am whipping around. I stand on the side and I stop panning the camera and I land on a guy deep in the forest just standing there staring at the camera. It was terrifying in this. He was standing maybe 100 yards away and it was just so creepy. That’s not in the movie.

How will VR affect the way audiences experience entertainment in the future?

Audiences are attuned to more interactive experiences and, unlike this movie, there are experiences when you are looking around there are ways of engaging audiences effectively and there are ways to feel dynamic. I think that the more the content is aligned with the brand purpose, whatever the idea, whatever the story is, that where I think it really shines. A lot of times right now you see it in movie marketing or you see a VRP, some kind of advertising or behind the scenes. But the most effective versions of it are where it’s written into the native language of whatever the project is. Something the director and writer are involved with. I think what you’ll start seeing is an alignment where every project will have a regular deliverable that you can watch on a TV, or on a phone, or an immersive version, or something you can play interactively with as a game and they will tick all those boxes in an authentic way where they are all kind of versions on the same theme where one is a derivative of another.