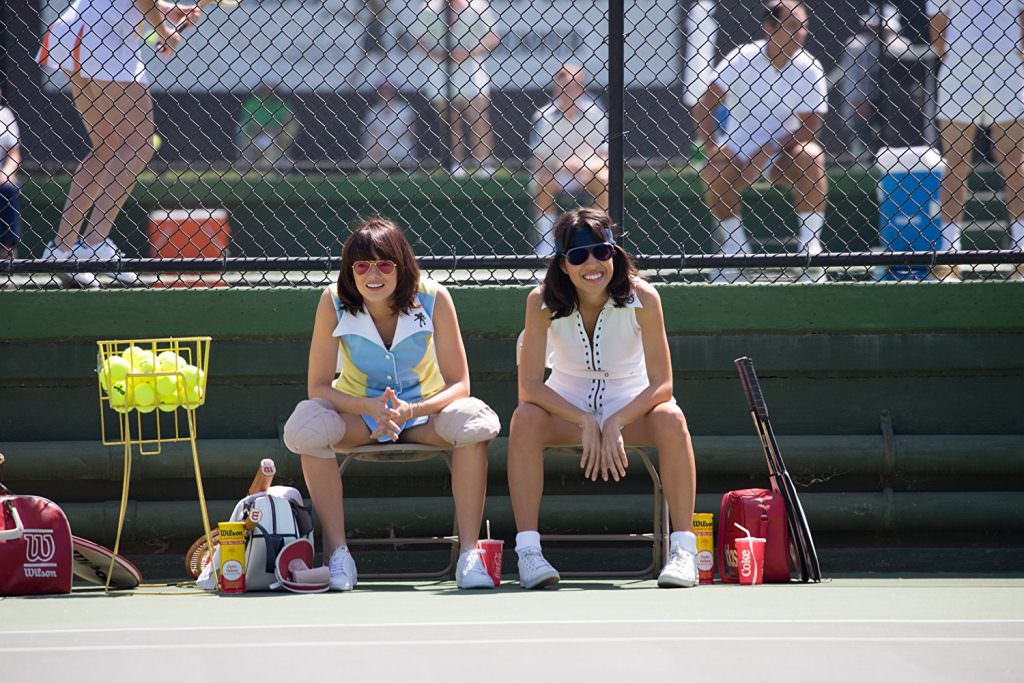 Over the past five years, composer Nicholas Britell has built a name working on some of the most impressive and artful Best Picture nominees in recent memory: Twelve Years a Slave, Whiplash, The Big Short and, most recently, the stunning (and Oscar-winning) Moonlight. This year, Britell entered the Oscar race once again with Battle of the Sexes, Jonathan Dayton and Valerie Faris’ charmingly vivid retelling of the historic tennis match and rivalry between Billie Jean King and Bobby Riggs. It’s a rousing and characteristically poignant piece of film from the Little Miss Sunshine collaborators, but it’s Britell’s bracingly unique approach to the score that helps to categorize Battle of the Sexes as something entirely special.

At the fifth annual Middleburg Film Festival – a thoughtfully curated selection of some of the year’s most notable and unique films – the film screened post-release to a packed house, eliciting the kind of fervor from an audience not unlike the one that must have surrounded the original King/Riggs match. And following the fest’s incredible live concert made up of selections from Britell’s impressive oeuvre, following a loving live performance of selections from Britell’s impressive oeuvre, we spoke with the composer to discuss the musical influences behind Battle of the Sexes, his collaboration with Sara Bareilles for “If I Dare” (an early Best Original Song contender) and what his approach to the period sports film has in common with his Moonlight score.

That’s a great question. I think there’s probably two factors that really go into it. The first is having material that really resonates for me. I think that so much of my enjoyment and goals with writing music is that I love to write music and communicating my feelings with the audience. I think that’s so much of my approach is about finding, feeling emotions and sort of translating those emotions into music, in a way. And I think when I have a project that really resonates for me on an emotional level, that’s something that can be very inspiring. But also, I think a lot of it has to do with relationships too. I love collaborating and that’s one of the things that’s so exciting to me about film in particular is that it’s so collaborative, it’s such a team sport in a way. And getting to work with people who inspire you and really nurturing those creative relationships is definitely part and parcel of picking projects and finding people that I really collaborate with and am inspired by, that’s definitely a piece of how I pick projects.

One of the many wonderful things about the Moonlight score is the way it approaches its musical themes for each chapter of the film. Obviously in Moonlight there’s only one character to follow over many years, but I noticed in Battle of the Sexes that both King and Riggs have their own themes as well. How did you structure this differently – or similarly – in comparison to scores you’ve done in the past?

Great question, I think a lot about the structure of a score for each movie because one of the things that I find so fascinating about movies is that every movie is its own unique universe, for me. Every movie is a new adventure where you get to explore a new story, new characters and hopefully create a new soundscape, a new musical environment. A lot of it depends on the way the movie sort of flows, and the feelings of the movie. In Moonlight there were the three chapters, and the way that Little evolves and grows through the course of the film definitely was a big part of my conversation with Barry [Jenkins]. With Battle of the Sexes, it’s interesting, I think my focus was really on sort of thinking about the internal versus external stories that are going on. What really drew me into the movie in the first place is that on the surface, there’s this story of the match. Of this huge, global spectacle that was going on. But what I really loved about the movie is that it actually focused a lot on Billie Jean King’s and Bobby Riggs’ internal stories, there was this sort of external sports competition, but actually a lot of the movie is about Billie Jean’s own personal hopes and dreams and struggles, and Bobby’s own insecurities: his gambling addiction and his marital problems. What I musically focused a lot on was actually telling that internal story and the way that that evolves over the course of the movie is that the themes that you’re hearing with the characters early on, their sort of personal themes, those themes take on a much bigger scope as we get to the match. And when we’re finally in the match, some of the much more intimate themes from the beginning are now being performed on a full symphony orchestra during the match. So there’s kind of this subconscious evolution that goes on where the music itself sort of expands and grows where their own personal stories are being realized on this massive stage.

That’s incredible. You’ve done period pieces before, but the ‘70s is almost a different beast entirely. How did you approach those kinds of musical influences?

Thinking about the time period was among the first things I talked to Jonathan and Valerie about. Initially, we were brainstorming, “How do you approach the ‘70s in a fresh and unique way?” And I always think about what’s the way to create a sound world that feels unexpected, potentially. One of the things we first thought of was, what if we wrote classical music but I scored it for a 1970s rock band, so it’s like classical music on electric guitars and bass and drums. So we started with that instrumentation, and when we were working together I thought, “Well, why don’t we add some woodwind instruments, what if we just added winds, and what if we added some strings here.” And actually the score expanded as we tried these things because the movie responded so immediately to us giving it more of an orchestral scope in some ways. It’s part of the mystery of the scoring process, where you really experiment and you work closely with the directors, and you are open to trying things out, the movie almost tells you things about what it responds to. And you just see the ways in which you try different orchestrations for example, that scenes almost seem to be unlocked in this way, and you see things and you notice things that you didn’t before. So it was interesting how thinking about the ‘70s at first was sort of like a starting point, but the score itself, it evolved in its own sort of terms. I think there’s a feeling in the texture of the score and the 1970s, we recorded the score with vintage microphones, actually.

Yeah, as if it were from that era. And I also did some analogue tape effects to add that texture to that sound quality at times. I love the sound of recordings from the ‘70s and there’s sometimes just a different feelings to those recordings. So I did some interesting post-processing of the music to try to give it that feeling. But I think the notes themselves, the music, I think it’s more just the texture feels very ‘70s, even if the music isn’t overtly ‘70s-esque

What can you tell me about the Sara Bareilles song that we get over the credits, it seems like an obvious front-runner for Best Original Song. How much input did you have in putting that piece of music together?

The Sara Bareilles song, we wrote actually wrote it together. It was actually a dream of John, Val and I. We wanted to have an original song in the movie, we reached out to Sara and she really loved it and was really inspired by the movie and we worked together where she actually took some of the theme ideas from the score and evolved them into this song, and she wrote these gorgeous lyrics and she’s such an incredible musician, I really can’t say enough about how amazing she is. And I think she did such a beautiful job singing, and it was such a wonderful experience to collaborate with her on that. That was a real dream of ours to have a song that felt almost like a culmination of the feelings of the movie. Because it’s nice to have a song where it does feel like it’s really an outgrowth of the movie itself. That was really important to us.

And how does your collaboration with a music supervisor help sort of shift the soundscape, how much input do you have in the choice of sources tracks in some of these films?

It depends on the movie, in some movies, some songs are even written into the script, where the director knows they want certain songs in certain places. Like in Moonlight for example, Barry had written “Hello, Stranger” into the diner scene. He knew he wanted that song, and it was beautiful to have that song there. But on other projects, I get involved, sometimes in a later stage. Battle of the Sexes for example, with our music supervisor a lot of those sourced 1970s songs had already been chosen. And I think they’re beautiful, they really give you a sense of time and place. Hearing something like “Crimson and Clover” or “Rocket Man”, it immediately takes you to that time. But yeah, I would say it depends on when I get involved in a particular movie.

Last I heard, you were working on Ocean’s Eight. If that’s still the case, can you tell me anything about it?

I am working on Ocean’s Eight, I can’t really talk about it unfortunately. But I’m working on quite a few projects coming up. Which I think we’ll announce hopefully in the near term, but for right now I unfortunately can’t talk about anything beyond Battle. But I would love to get into that shortly, once I know. [laughs]

Obviously you’ve had a chance to work with some incredible directors over the last half decade or so. Is there a specific filmmaker that’s always been on your list as a dream collaboration?

There are lots of filmmakers who inspire me and in recent years, I’ve been very lucky that some of my dream filmmakers I’ve actually had a chance to work with. I feel very blessed in that respect. But, honestly there are so many directors that I admire and I respect, there are no people in particular that I would highlight. But I am as inspired by potentially working with a great, experienced director as I am up and coming newer directors, too. It’s very exciting having a chance to work with a director who’s early on in their career, you can have really interesting conversations there as well. I think for me, it’s really just about exploring as many different exciting film adventures as possible, that’s kind of how I approach it.

TAGSBattle of the Sexes Composer