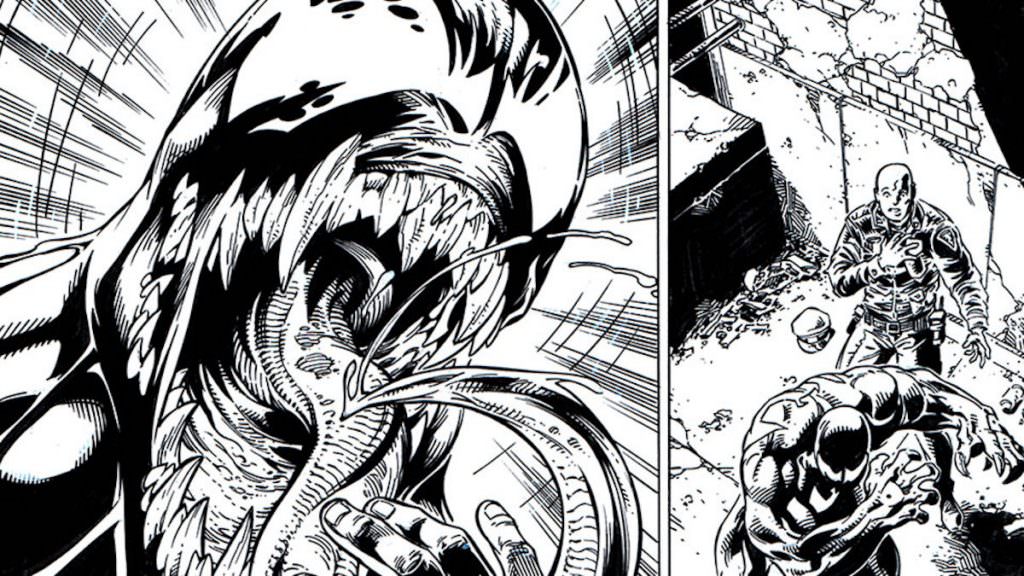 We’re still surprised, and excited, that Sony is making a film for Eddie Brock, aka the antihero Venom, one of Marvel’s most inspired creations. Venom has always been both a beloved villain and a bit of a hard sell as a character that could support his own stand-alone film, considering what he’s made of. Granted, Brock/Venom’s journey via the pages of Marvel comics has seen him go from being an outright villain to an antihero, a complicated creature with human and alien components. Unlike witty antiheroes, like Deadpool, he’s never been particularly funny or relatable. He is, after all, at least in the upcoming film, the product of the union between a bitter, vengeful reporter (Brock) and an alien parasite. However his look— that black Spider-Man costume, the fangs, that tongue—is to die for.

When we last saw Venom on the big screen, he was played by Topher Grace in Spider-Man 3. That version of Venom was fairly straight forward; Brock, a rival photographer, hates Peter Parker, gets infected by the alien symbiote, and becomes the fearsome Venom. Yes, he was tortured, and became aware by the end of the film that he couldn’t control his alien powers, but the nuances of his character were marginal at best, as it was Parker’s journey we were on. Many people had been waiting for Venom to arrive on the big screen, and Spider-Man 3 represented something of a let down.

When word spread that Sony was giving the character his own film, and had cast Tom Hardy, no less, to play him, expectations for what Venom could be have exploded. Hardy is just the type of actor who could give Venom gravitas and complexity, having already proved his comic mettle playing Bane in The Dark Knight Rises, as well as his action-hero chops playing the titular Max in Mad Max: Fury Road.

Sony has released the first photo from set, proving that yes, this film really is happening, and that Hardy seems to be enjoying himself. On the Venom Movie Twitter page, we see Hardy and members of the crew, with the caption “Day 1.”

The extraterrestrial symbiote who makes Brock Venom actually first merged with Peter Parker (it took the help of the Fantastic Four to free Parker of the alien intruder), before eventually latching onto rival photographer Eddie Brock. It’s this version of Venom that became one of Spidey’s biggest foes, yet in director Ruben Fleischer’s (Zombieland) film, as far as we’ve heard, Spidey won’t be making an appearance thanks to his ongoing connection to the MCU, of which Venom will be separate. Yet Venom has managed to snag some seriously good actors to surround Hardy in this stand-alone film, including Michelle Williams, Riz Ahmed, Reid Scott, Jenny Slate, and Scott Haze. This is a promising group of talent to help give one of Marvel’s most intriguing characters a proper film, and while it seems only natural to have Venom and Spider-Man together, so long as they’re apart at least we have the likes of Hardy in the black suit, battling his inner demons and the alien symbiote that gives him his incredible power.