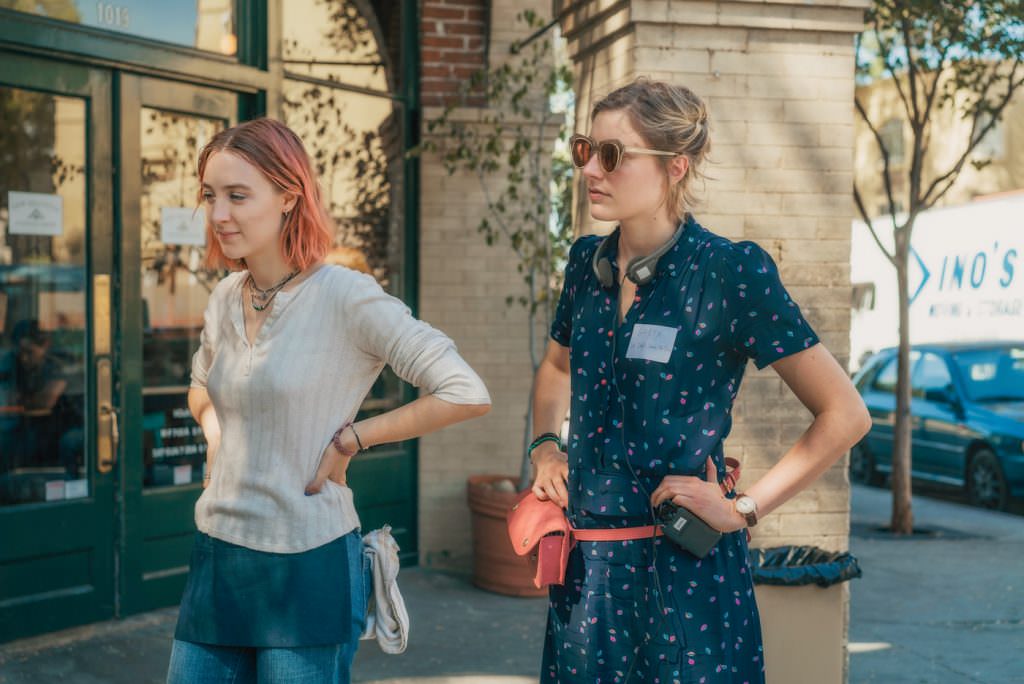 Fans of Greta Gerwig know her as the go-to muse of indie filmdom’s mumblecore movement  and for her collaborations with such notable  directors as Joe Swanberg  (LOL, Nights and Weekends) and Noah Baumbach (Greenberg, Frances Ha, Mistress America).  But after a decade of co-writing, co-directing and co-producing films, the actress is flying solo behind the camera for first time as the screenwriter and helmer of Lady Bird, opening this Friday.

The semi-autobiographical coming-of-age tale set in the post 9/11 world  that spans the years 2002 and 2003 stars Saoirse Ronan (Brooklyn) as Christine aka Lady Bird, a rebellious senior at a Catholic school in Sacramento who is desperate to attend an East Coast college despite her family’s shaky financial state. The story has echoes of Pretty in Pink – including two pink-hued  thrift-shop frocks and a pair of suitors (Manchester by the Sea Oscar nominee Lucas Hedges and Call Me by Your Name’s Timothee Chalamet) who, in this case, prove not quite suitable. But what drives the plot is the bumpy relationship between our flame-haired, acne-prone heroine and her hypercritical yet super-caring mother (Laurie Metcalf, who matches her screen daughter quirk for fabulous quirk).

The result is an honest, impeccably cast and wittily wistful dramedy about a young woman’s determination to leave her family’s nest at all cost. Gerwig, 34, discusses her choices as a filmmaker and the joy she felt while making her fledgling directing debut.

When I have mentioned  that I was seeing  a movie named Lady Bird, many people  thought it was about the former First Lady. You had to know that might happen.

I just love the name and it was so evidently the title the minute I finished the script. What are you going to do? You just go with it.

If I didn’t know beforehand, I wouldn’t guessed that this is your first solo directing effort.  What I really liked is the way it moves, the pacing. When you are dealing with humor, that is very important. It had an indie feel but it moved in a mainstream commercial way.

That’s good. Definitely, in the writing of the script and then when we were editing it, I wanted this feeling of tumbling forward faster than you can hold onto it. This ticking clock of the last year. One way or another childhood is ending. And then, because of the structure of high school, there is a very clear line of when this happens. I felt that was something essential to the film and I wanted it to feel that way without sacrificing the depth of each character. It was a balancing act. But because I had such amazing actors playing these people, I just wanted it to feel like every single character was someone you could follow and that they would have their own entire movie.

You made that observation in the production notes and it dawned on me that is why I so enjoyed this movie so much. Everyone is so specific. You know who they are. They do something with their face or say something in a tone of voice that defines them. It’s not as if they are stereotypes. Just the opposite. They all could be their own movie.

They could be, and that is because of the actors. Also, I spent so long writing and overwriting the initial draft that even if I have reduced the characters to a couple key scenes, I feel like when I work on them with the actors that I can speak to what is their history and what is their background. It’s like the thing that a lot of what a lot of actors do for their individual characters of journaling and writing a whole back story. I have to do that as a writer for each character because I think part of the job of being a writer is listening to your characters. They tell you who they are. That is the part of writing that is mysterious. You find yourself writing something you don’t consciously know where it came from. It doesn’t feel like you making decisions. It feels like it is telling you what it wants to be. 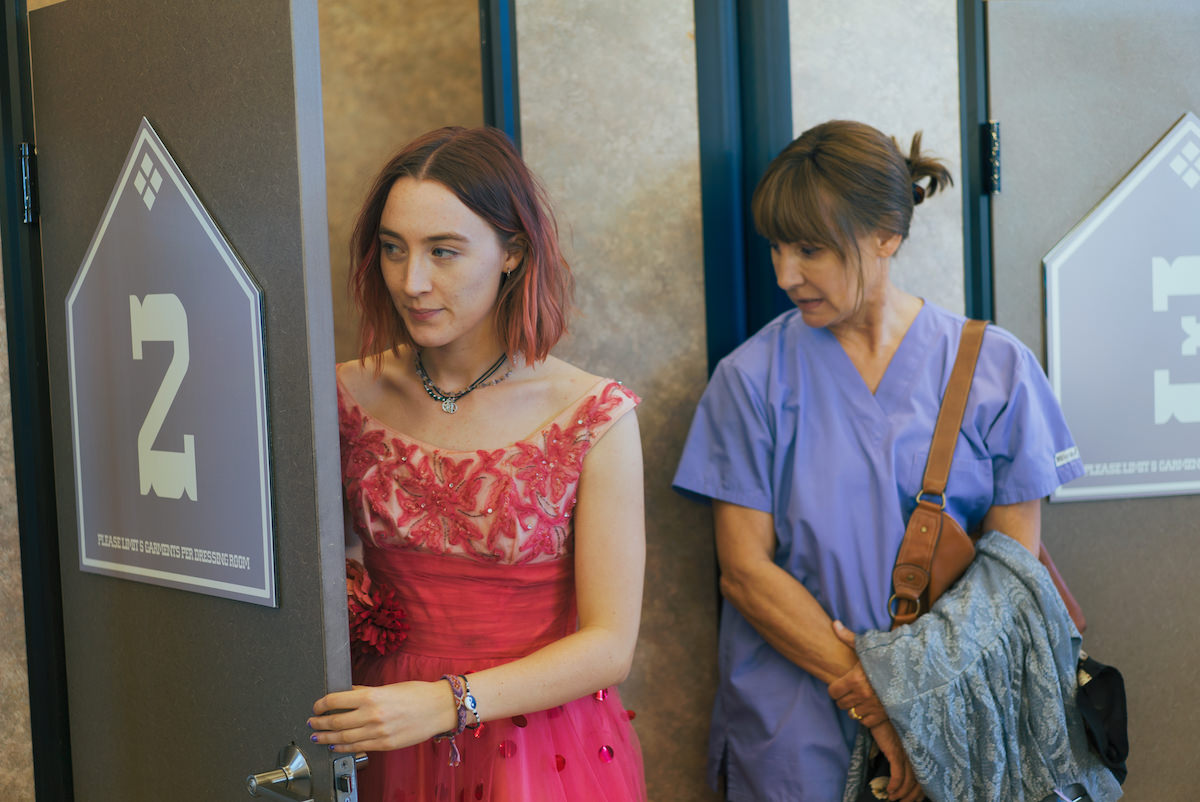 Saoirse Ronan and Laurie Metcalf Photo by Merie Wallace, courtesy of A24

I liked your explanation after the screening last night about how you will make a reference to something specific in the script, like the large blue house in the upscale neighborhood that Lady Bird covets and her offhand mention about being from “the other side of the tracks.” And then you repeat them later for a big payoff.  I guess other people do that, too.

I have a particular love of it and these threads that seem like they exist on their own. And then you suddenly realize they are being woven. And that quality I really admire.

It also makes you feel like you are inside the world. Because you’ve seen it set up. So you have this feeling when it comes back, you know exactly what it is.  I think carrying those threads through, it is as if you are a co-conspirator in the story.

There have been a fair amount of other  movies shot in your hometown of Sacramento. Not that it is always acknowledged as the setting of the film. They include Steamboat Bill, Jr. with Buster Keaton, American Beauty, The Godfather: Part II with Fredo on the boat and Pleasantville. Not that they always acknowledge being there. It must have been comforting in a way to shoot in a city you know so well. What is that body of water they drive by several times.

With American Beauty, it is the first overhead shot of a big tree-lined street. It was a big deal. I was pretty excited. With The Godfather, that is technically supposed to be Lake Tahoe. And there are parts of Pleasantville  that were shot in Sacramento, too. There is a quality of Sacramento that is a bit Pleasantville. It was very fun to have a crew that came from Los Angeles and it is almost they can’t believe it. When we were shooting in neighborhoods in Sacramento, all these kids would show up on their bikes with their dogs and all the friends. And they would follow us around. They would say, “This is like the 1950s,” and I was like, “I know. It is still happening here.”

When did the urge strike to direct your own script? When did you know you  were ready?

I really had always wanted to be a writer-director and, because I didn’t go to film school, I used all these learning-by-doing moments and watching on other sets. I think it was when I really finished the draft to this film that I thought, “It’s time and this is the one. I have more to learn but I am going to learn by doing rather than by not doing.” Could I have done it earlier? Maybe. But I don’t regret any of the time I spent in preparation for this. By the time I was in pre-production of this and, really, when I was writing it, I had such a clear sense of what it takes to make a film. Not just finishing a movie, but getting it into theaters and getting it out into the world.

Did you like not having to act along with your other duties? Often many actors who direct must agree to also appear in the movie.

I don’t have any interest in directing myself. I think I would actually lose my mind. It was the hardest I’ve ever worked but it was the greatest joy of my life to make this movie. It was a moment of doing what I love to do. 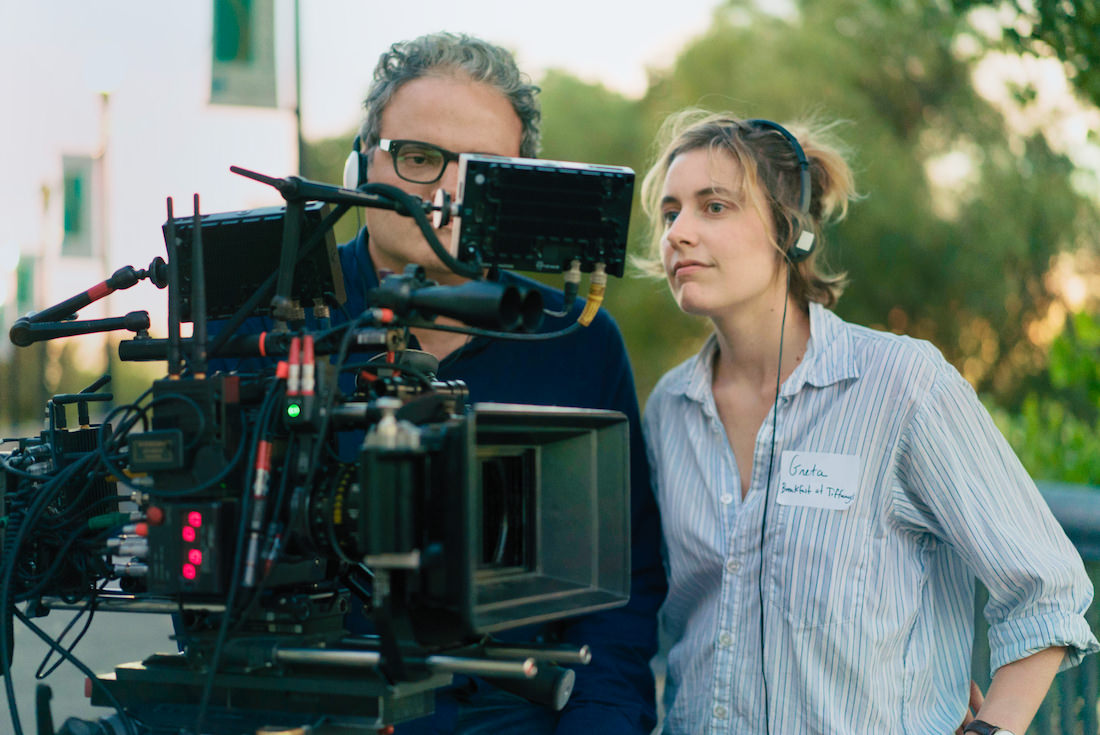 Sam Levy and Greta Gerwig on the set of LADY BIRD. Photo by Merie Wallace, courtesy of A24

I laughed long and hard at how Lady Bird and her best friend chowed down on the communion wafers as if they were potato chips. And the football coach turned drama club director writing his stage cues on a chalkboard as if they were plays on the field. And having Lady Bird place a “Just Married” sign on the back of the Mother Superior’s car. Where did you get those ideas?

The “Just Married” sign isn’t something I had done though some girls I knew did. So I took it from them. The football coach was a completely made-up thing. There was a JV football coach who was the choir teacher, which I thought was pretty funny at the boys school. And I sort of took that and transformed it. The wafers? That one was me. I had a real priest play a priest in the movie and he did give me a go-ahead. He said they really weren’t consecrated so it was fine.

I love those dresses Lady Bird buys from a thrift shop. I liked that the first one is more girlish and the second is more womanly. It reminded me of Pretty in Pink.

That was a little tip of the hat to Pretty in Pink. April Napier, who designed the costumes, we looked at many different versions. But those two dresses stood out. As much as I wanted to make the movie real and lived-in, I did want to feel like she had an iconic look. It felt connected to the past but also completely her own.

Did you include any Fast Times at Ridgemont High nods?

The Cameron Crowe connection comes more from Say Anything.  I do think what I wanted to work against is that when there is a woman at the center of a movie, usually it is about one guy. I started with the premise of, What if there is two guys and they are both wrong?”

Who is the first person you showed the movie to when it was finished?

My manager, who ended up producing the movie, Evelyn O’Neill. I have a group of people who read scripts. My partner in life and also in filmmaking, Noah, read it. I had an editor friend of mine who edits books read it. Sam Levy, my cinematographer. I just got notes from different people.

I have to ask you about doing a voice for Wes Anderson’s second stop-motion animated film Isle of Dogs since I was a big fan of his first animated film, Fantastic Mr. Fox. What kind of dog are you?

I am actually not a dog. I’m a person. I play a foreign exchange student named Tracey. And she has great hair. She has curly blonde hair and she wears a really cool outfit.

Featured image: Saorise Ronana and Greta Gerwig on the set of Lady Bird. Photo by Merie Wallace, courtesy of A24

David Oyelowo on His Stirring Directorial Debut “The Water Man”