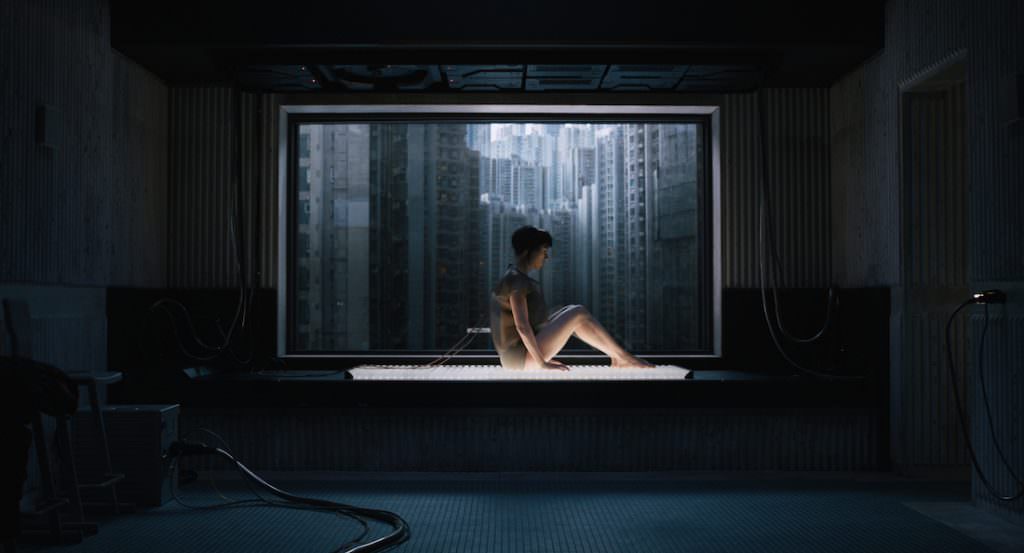 Disembodied: From Her to Ghost in the Shell, Scarlett Johansson’s Astonishing Disappearing Act

She’s spent much of her early career playing idealized, beautiful ingenues: from Woody Allen’s neurotic and effortless Nola Rice in Match Point to Joseph Gordon Levitt’s hoop-earringed “dime” in Don Jon, but Scarlett Johansson has never been totally comfortable being typecast as the gorgeous leading lady: “I’ve been able to use [my looks] to my advantage in some ways. In other ways, it can be very frustrating… I’ve always thought of myself as being a character actor, and you can be placed in this specific stereotype that the media puts you in.”

It’s true: Johansson’s beauty is a phenomenon that at times threatened to eclipse the talent of the actress herself. A New Yorker critic famously wrote a fawning profile of the actress that included a line that insisted “[Johansson] seemed to be made of champagne,” and then there’s the even more unsettling tech programmer who constructed an AI robot made to bear a specific, disturbing resemblance to the actress. And while she has consistently maintained a relatively low public profile, Johansson has slowly begun to establish ownership of her own body and beauty, both as a star and as a woman, in the form of the roles she’s begun to favor.

This first sign of Johansson’s new approach to shaping her Hollywood persona came with a one-two punch 2013, when she teamed up with Spike Jonze for the esoteric, quietly nihilistic Her. But in a movie so opaquely obsessed with a nameless, beguiling female character, Johansson is nowhere to be found: that is; her physical body is absent. She voices a female AI called Samantha, who Joaquin Phoenix’s shy and lovable sad sack begins to slowly fall in love with, as he proceeds to project his hopes and dreams upon the increasingly lifelike voice hidden within his slim cell phone. And thus, after years of being objectified by Hollywood, Johansson would begin the process of removing her physical body from the audience’s conception of her as a star – and regaining control of her appearance from those inside and outside the industry that would co-opt it for their own purposes.

Next, in the same year, came Under the Skin, a role so deeply unexpected for the actress that it would likely do more than any other film in her oeuvre to help rupture her untouchable identity. In it, Johansson stars as a sinister alien life form cloaked in a gorgeous, raven-haired human guise, lurking along the Scottish countryside luring men to their certain deaths. At first seemingly content to stalk and consume her prey, Johansson’s life form ultimately becomes bewitched by her only vaguely functional human body, a dichotomy of forms that director Jonathan Glazer underlines in the film’s final sequence, in which Johansson’s true glossy alien form holds her far more familiar human face in its hands, having shed her body in a moment of peril. It’s a role that, if transgressive, is plainly perfect for Johansson – something Glazer would confess was more than intentional. “[W]hat she does in the course of the film, in her own discovery, is she reclaims [her body] — she de-eroticizes her own image, actually… It seems to me to be somehow in line with Scarlett’s life as an actress, and in the way she’s objectified.”

The following year came Lucy, a Luc Besson barnburner that attempted to postulate what might happen if an individual was given access to 100% of their brain power. The result? That Johansson’s initially short-skirted, unwitting pawn would first become a supercharged force of nature, one whose intellectual superiority manifests itself in psychedelic visions and as a spiky, black substance that consumes her entire body. Then, she vanishes. The room around her gasps as Johansson’s tasteful cocktail dress and Louboutins crumple around the thin air she’s left behind. Ultimately, her being is stored on a thumb drive, a chuckle-inducing but oddly poetic representation of Johansson’s slow cleaving of her body from the talent within it.

Of course, during the time Johansson was working to deconstruct her starlet body onscreen, she was also becoming one of the highest paid actresses in the world with her work in the Marvel universe – and though Black Widow is mostly notable for her skin-tight get up and a high round kick, even her superhero fare was helping the star draw a line in the sand between her identity and her body itself. An orphaned girl trained to be an expert assassin by the Soviet Union, Black Widow as a character is already a force of nature separated from her emotional identity, but it’s in Avengers: Age of Ultron that Johansson famously refers to her character as a “monster,” a word that would help to separate Natasha Romanoff’s interiority from Black Widow’s gleaming catsuit.

Since then, Johansson has played around with her new, distinctly altered star persona, working with the Coen Brothers to mimic the ‘40s bombshell she’d be construed as in Hollywood for years, as well as lending her voice to a few animated projects. But she once again returned to these themes with Ghost in the Shell, an esoteric live-action reworking of the iconic anime, in which Johansson stars as a cyborg, a woman saved from a terrible crash and enhanced to become a perfect soldier. As Major, Johansson spends much of the film in a “thermoptic suit”, a skin tight, flesh-toned suit that in turns, portrays her as nearly nude and then renders her entirely invisible. The film’s biggest plot twist, which I won’t explicitly reveal here, involves the revelation that the brain placed inside Major is completely unrepresented by the body that houses it, a plot element directly evocative of Johansson’s conception of herself as a character actress, while Hollywood remains convinced she is in fact a leading lady. Even Ghost in the Shell’s “shelling sequence” (an iconic scene from the original anime) literally depicts the deconstruction of her body on screen into something far removed from anything we could describe as human.

What’s next for Johansson on her journey of redefinition? So far, just some voice work in Wes Anderson’s upcoming animated film and a handful of starring roles in the upcoming Avengers films – and while the actress has yet to comment publicly on her slow transformation from new-Hollywood ingenue to a far more complicated kind of female body, it’s not hard to dream up what might be next for the ever-evolving star. While none may know just where Johansson will go from here, you can bet whatever it is, it will be firmly on her terms.

Featured image: Scarlett Johansson in The Ghost in the Shell. Courtesy Paramount Pictures.

TAGSGhost in the Shell Her Under the Skin