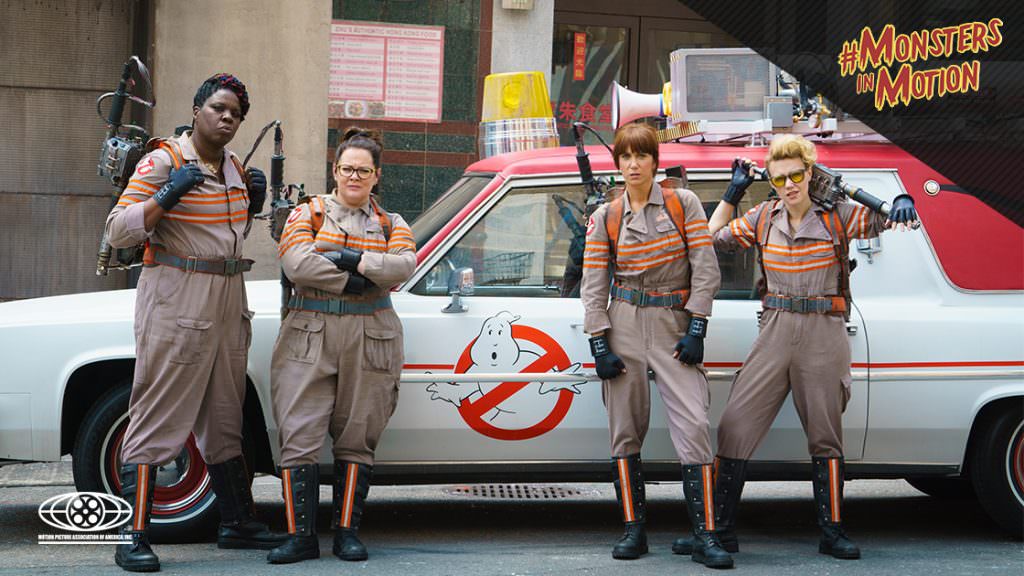 From Beetlejuice to The Witches: Halloween Films for the Whole Family

Halloween celebrations have long involved movies, including kid-friendly flicks that can keep the entire family spooked (but not too terrified) and entertained. Below is a list of some of our favorite films for families on Halloween, featuring the work of film icons like Tim Burton, Joe Dante, and Henry Selick, as well as puppeteering legends Jim Henson and Frank Oz, among others.

A now-classic sci-fi/comedy that follows three kooky parapsychologists in New York City who start a business investigating/capturing ghosts after being fired as researchers at Columbia University. For an updated take, the 2016 version of Ghostbusters was hilarious, with four of the funniest women in the world—Melissa McCarthy, Kristen Wiig, Kate McKinnon, and Leslie Jones—taking up the proton pack projectors . ▶ Click HERE and HERE for the trailers.

A film adaptation of Roald Dahl’s beloved children’s book about a young boy who moves in with his grandmother after losing his parents, and finds himself cornered by a secret society of child-hating witches. ▶ Click HERE to view the trailer

The Nightmare before Christmas

A spooky stop-motion animated fantasy/musical about the king of Halloween Town’s secret obsession with Christmas and his overwhelming desire to bring its more cheerful elements into his realm by kidnapping Santa Claus. ▶ Click HERE to view the trailer

A fantastical, coming-of-age comedy set in 1962 that celebrates the magic of the movies while following an ambitious B-movie showman on a mission to intensify the cinematic experience, and a dedicated young fan and horror enthusiast who eagerly awaits his Saturday matinee. ▶ Click HERE to view the trailer

A stop-motion animated dark fantasy about a young girl who finds a secret door into an alternate universe while exploring her new home, transporting her into a seemingly better version of her current reality – until it tries to trap her forever. ▶ Click HERE to view the trailer

This unique fantasy epic by Muppets creators Jim Henson and Frank Oz marked the first ever all-puppet full length feature. It follows a young elf-like creature who sets off on a quest to find and re-attach a missing shard of a magical crystal in order to restore peace to his world. ▶ Click HERE to view the trailer

An eerie stop-motion animated adventure about a young boy with the ability to communicate with the dead who tries to save his town from a zombie invasion and reverse its curse. ▶ Click HERE to view the trailer

A fantasy/musical adventure created by Jim Henson and George Lucas. The film follows an imaginative teenage girl on her quest to rescue her baby brother from the center of an intricate maze after he is captured by the “Goblin King.” ▶ Click HERE to view the trailer

A stop-motion animated sci-fi family fantasy about a young boy who resuscitates his dog after it is struck by a car, causing commotion among his community as word spreads about its resurrection. ▶ Click HERE to view the trailer

A horror-comedy about recently deceased newlyweds who try to scare away their house’s new occupants, enlisting the help of a deranged ghost who claims he can remove them from the premises. ▶ Click HERE to view the trailer