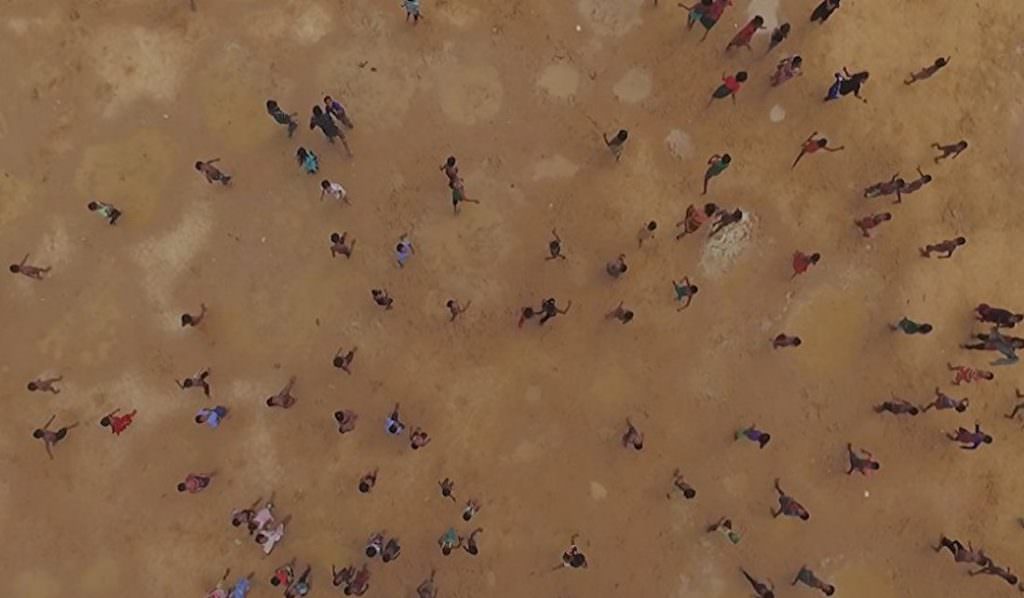 Human migration is natural;  borders and checkpoints and barbed wire are not. War causes mass suffering, but the indifference of the comfortable exacerbates it unimaginably. Tolerance and compassion are in short supply when they are needed more than ever. These ideas are central to Human Flow, the artist Ai Weiwei’s heartbreaking but mesmerizing documentary on the worst refugee crisis (the United Nations estimates there are currently 65 million people displaced globally) since World War II. Ai traveled to 23 countries to shoot this film, much of it with drones, and contrary to expectation, the depictions of refugee camps in Jordan and Bangladesh, of boat crossings and tent camps under the Paris metro, come across like visual poetry — albeit, urgent, tragic poetry.

Ai has lived in Berlin since 2015, when the Chinese government unexpectedly returned his passport to him after holding it for four years, having arrested and held him in 2011 for 81 days without cause, and prior to that, in 2010, demolishing his studio and placing him under house arrest. He is personally familiar with the themes — repression, violence, unchecked state power — that run through his interviews with these people on the move and the headlines that scroll across his footage. In his personal statement on the film, he refers to it as “a personal journey, an attempt to understand the conditions of humanity in our days.” Even as it is heartbreaking, Human Flow is weirdly serene, the distressing interviews interspersed with long, quiet, beautifully composed shots — many from the air — of upright specks swishing along in the monochromatic dust of the desert or among the greenery of a destroyed jungle. Humanity seems to rush about constantly. Yes, human migration is natural, Human Flow seems to points out, but if only it wasn’t so forced, so harrowing.

The film uses plentiful drone photography, and the effect of seeing thousands of people from above makes them seem like ants: continuously moving, but with no obviously discernible motive. On the ground, Ai’s interviews humanize and give shape to this visual sense of thwarted purpose. Children are everywhere, and none of them seem to be enrolled in school. The adults are trapped; going back is death and forging ahead has been made impossible. Ai lets his subjects tell their stories and then he moves on, to another camp, another country. Syrians trapped at a railroad station next to a razor wire fence on Greece’s border with Macedonia express their despair — will they ever be allowed on one of the passing trains? — and then the film crosses the globe, to meet Myanmar’s Rohingya living in makeshift villages in Bangladesh. The approach makes you need to know more — is that bored little girl living in the former Berlin Tempelhof Airport going to school? Did that tiger make it out of Gaza? Who is going to clean up these thousands of abandoned life jackets? Who is Ai buying persimmons from? Where did he get them? Is he still there? The effect of this is frustrating but powerful: the most black-hearted viewers aside, Ai stirs up a need for further information that should, and does, translate to an urge to pay better attention, and to help.

Ai’s stunning use of drone photography and trance-inducing pacing should draw fans of his other documentary and visual work; it’s not all documentaries that really ought to be viewed on a big screen. Ai himself appears and disappears throughout the film, buying fruit from one refugee, pretending to trade passports with another, cooking kebabs on a grill that apparently came out of nowhere. Sometimes he’s just included in the shot, wandering around with a cell phone camera. Ai is one of the most important living artists; perhaps plunking himself into the documentary was a smart play to galvanize the most privileged of his art world audience. With or without Ai’s presence, however, Human Flow is an effective call to help: everyone deserves a home, and it is, and has been for quite a while now, the time to be impelled to do something.