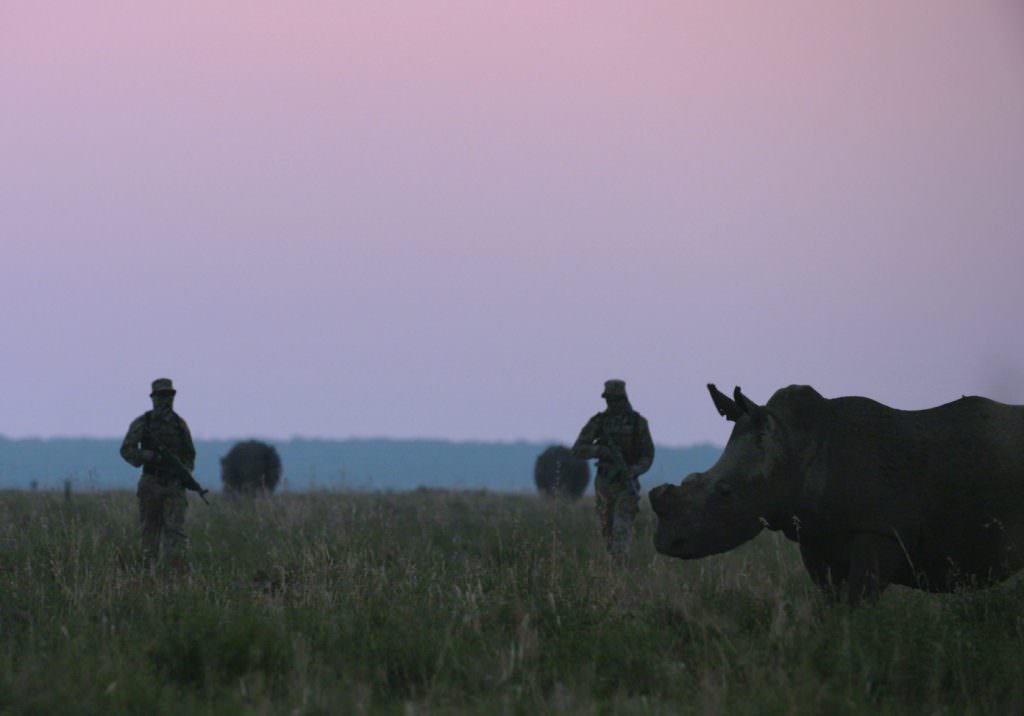 It takes a lot to rattle Brooklyn-based documentary maker Shaul Schwarz, who mingled with drug dealers to make his earlier feature Narco Cultura and weathered numerous war zones in his earlier career as a photojournalist. But two years ago, Schwarz was shaken to the core when he filmed game hunters killing an elephant in the wilds of Namibia. “That was really tough to be honest, because I’d never seen elephants before in the wild,” Schwarz recalls. “They’re such majestic animals, and you’re walking with this group of hunters almost wanting to make noise to warn the elephant. Then suddenly it happened. They shot the elephant. It was so quick and so raw that I wept. I shook. I kept filming, but I had a really hard time.”

The elephant hunt constitutes one of several unnerving sequences in Trophy (opening September 8 in New York). The film sheds light on the business of big game hunting, including the Safari Club International convention in Las Vegas, where vendors hawk goods and services geared toward the killing of the so-called “Big Five” – – elephant, buffalo, lion, leopard, and rhinoceros. How did Schwarz and co-director Christina Clusiau gain access to a secretive subculture that rarely opens itself up to mainstream media? “The hunting community is a very closed off world but we were upfront about what we were doing,” Clusiau explains. “We told the hunters, ‘We’re going to give you a fair shake. We’re not going to put words in your mouth.’ People respected that, and slowly we started to gain access.”

Texas rancher Philip Glass, the elephant hunter, proudly invited the filmmakers to join him as he coached his 12 year-old son on how to shoot a deer. “Philip wanted to be part of this documentary because he wanted to tell his story,” Schwarz says. “We knew by giving somebody like Philip a voice, the documentary wouldn’t be one-sided. He doesn’t believe in evolution, and to me that’s the beauty of documentary making. I’m curious about people who think different from me.”

Schwarz and Clusiau, equipped with Sony S-7 digital video cameras,  traveled to South Africa and spent time with rhino breeder John Hume. Reviled by hunters because of his anti-poaching stance, Hume, who owns 1,500 rhinos, tranquilizes the animals, saws off their horns and sells them to Asian consumers at a per-ounce rate that exceeds the price of gold. “John has nothing to lose because everybody hates him,” Saul says. “We were expecting to meet this devil-like guy who’s greedy and just wants to make money but we quickly realized that John truly believes in what he’s doing: if he can supply the demand for rhino horns from live animals instead of dead ones killed by poachers, that’s a win.” 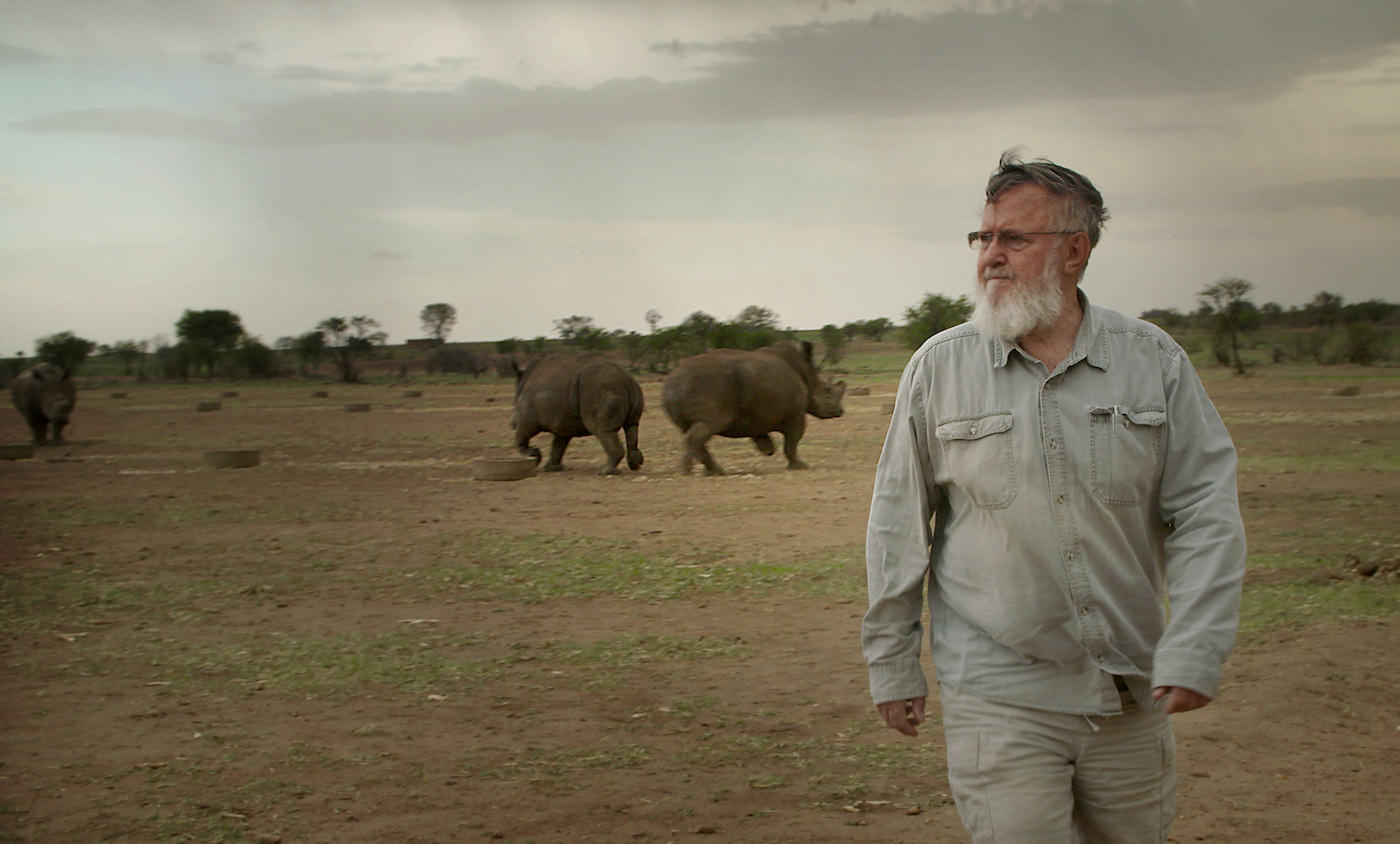 Buffalo Dream Ranch, North West Province, South Africa – November 2016:
John Hume, the world’s largest rhino breeder, walks among his  rhinos. Mr. Hume has invested more than 50 million US dollars into his rhino project. He currently is the custodian of over 1500 rhinos and fears that without legalization in the trade of rhino horn his project will come to an end. From Trophy, directed by Shaul Schwarz, co-directed by Christina Clusiau. Courtesy of Shaul Schwarz / Reel Peak Films.

Trophy also depicts life and death at a South African resort specializing in “canned hunts.” As cameras roll, local villagers round up wild crocodiles and place them a pond for the convenience of wealthy shooters. Schwarz says, “The hunting industry likes to claim that canned hunting almost never happens but that’s not true. It happens, a lot. It’s ugly to watch and it’s not ethical in terms of a sport, if anybody can call hunting a sport.  It  might work as an economic model but when you think about the welfare of the animal, it’s disgusting.”

Keeping their word to the hunters, the Trophy makers allow the footage to speak for itself. Schwarz says “We’ve heard some people say ‘I can’t watch this film because I love animals too much.’ But I don’t think Trophy is such a hard film to watch, once you get into it. We want to create dialogue between the different sides,” Schwarz says. “Making the film, we learned how to speak to hunters, instead of just screaming at each other like we do so much in this country today. We basically said ‘We’re not making this film to bash you. I don’t agree with you but I’d like to hear your thoughts.'”

Featured image: Buffalo Dream Ranch, North West Province, South Africa – April 2016:
An armed private security team patrols amongst some of John Hume’s 1500 rhinos. Hume has invested more than 50 million US dollars into his breeding project but he fears that unless rhino horn trade is legalized he will not have enough income to protect his animals from poachers. From Trophy, directed by Shaul Schwarz, co-directed by Christina Clusiau. Courtesy of Shaul Schwarz / Reel Peak Films.