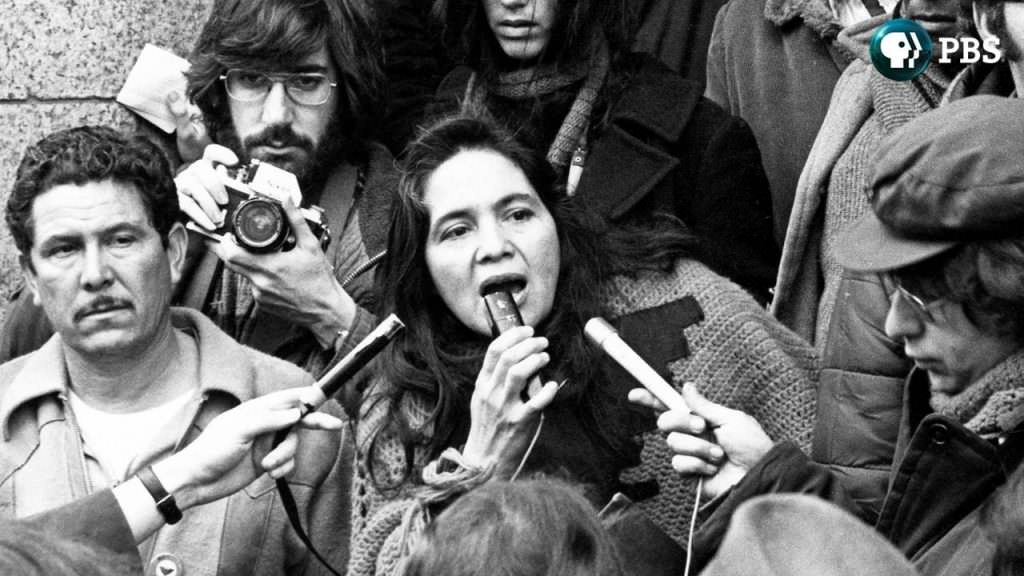 Not that many people know that Barack Obama’s “yes we can” slogan was translated from the Spanish “si se puede.” Even fewer know that the phrase, sometimes credited to United Farm Workers of America leader Cesar Chavez, was actually coined by the group’s co-founder, Dolores C. Huerta. This and much more is set straight in Dolores, the new documentary written and directed by Peter Bratt and executive produced by musician Carlos Santana.

The 87-year-old veteran organizer and mother of 11, now the president of the Dolores Huerta Foundation, recently visited Washington with Bratt to host a screening of the film. Filmmaker and subject talked to The Credits about the movie, which opened wider on Sept. 15. The interview, which has been edited for length and clarity, began with a discussion of Huerta’s role in shaping the movie.

Huerta: During the editing of the film, I was busy campaigning with Hillary Clinton, so I was not able to spend a lot of time with him. There are things I could have maybe added. But I have to say I was surprised with what he did with the film. Finding all that archival footage, and putting the whole thing together to make it not only informative, but entertaining. It’s a heavy subject — you have people getting beaten, getting killed in the film. Yet the music lifts it up, so you don’t get all depressed.

Bratt: I don’t think it would have been appropriate to have Dolores comment on the narrative structure. Those boundaries had to be established. I did feel it was important for her to see a rough cut. To have her input into that part of the process. But in the construction? I feel it would compromise her integrity as well as mine as a filmmaker.

It’s a historical film, but your subject was still there. Was that intimidating?

Bratt: A little bit. I came to the project with an enormous amount of respect for her. She’s incredibly respected in the Latino community. I definitely wanted to do it right. But as a filmmaker, I didn’t want to do a hagiography of this saintly figure. I really wanted the audience to relate to a human being. Who has complexities, so they could see themselves in her and her family.

I think the hardest thing for her, and sometimes it was a point of conflict during production, was the story’s being all about her. Being the subject of a 90-minute film. I think an activist, by nature, always wants to point the focus on the issues outside. I think that was difficult for her.

Dolores, you’ve said that this movie is actually the story of many people in the movement. Yet one of the themes of the movie is that you’re not as well known as you should be. Isn’t that partly because you prefer to put the spotlight on the movement rather than yourself?

Huerta: Well, yes. When you think of the five people who were killed, and Cesar’s having all those death threats on his life. The three fasts that he did, the last one for 36 days. Those are stories that really haven’t been told a lot. So many people went to jail, people lost their homes. I know we can’t include everything in the film. I feel I was very blessed to have been part of the farmworker movement. It’s a gift of my life, a gift to my life. But it was all of these people who made it happen, not just myself.

Bratt: I also think there’s an element, and Dolores speaks to it in the film, that women are conditioned to acquiesce and let their male counterparts take the center stage. She shared with me a couple stories of that in fact happening. At a contract signing, she negotiated the contract and when they went to take this iconic photo, one of the male leaders came in, so she just automatically got up and gave him her seat. And she’s not in the photo!

Huerta: He said, “Do you mind if I sit where you’re sitting? And I said, “Oh yeah, go ahead.” I got up and walked away. I would never do that today. Women need to take credit for what they do.

One of the chapters in the story I didn’t know was the East Coast organizing that you did, working directly with Gloria Steinem. Did that make you more assertive about women’s rights?

Huerta: When I was working with Gloria, I was focused on the grape boycott. It wasn’t until afterwards…. But I did start to pay more attention to how women were being treated in our movement. One of our board members was sexually harassing a woman, and she wrote me a letter. It made me so angry to see that was happening. And I went to Cesar and said, “We have to stop this.” And Cesar actually did take care of it.

Peter, did the film change from your original conception as you did more research?

Bratt: I wrote a 40-page treatment, outlining the major narrative points and turning points. What we didn’t see was what you discover in the process. That’s the big difference between narrative films and documentaries. In documentary, you are discovering a lot of the themes in the process of interviewing. Also, you don’t what you’re going to get when you’re digging through archives.

We went through the archives for two years. We discovered this incredible 16mm material of Cesar and Dolores together in the CBS vault, and it was available. That really added a richness that originally we didn’t foresee.

Also, in the interviews, so many people would say, “You know, Dolores worked 16-hour days, and then she would dance the night away.” Everyone was making similar comments. And [her daughter] Angela said, “She was a professional dancer. She didn’t pursue her dancing career, but she is a dancer on the stage of justice.” When she said that, a year into the process, I thought, “Oh my God. What an incredible way into the story. That would capture her spirit.”

Dolores, did you see things in the movie that surprised you?

Huerta:I had never seen that footage of Cesar and myself. I was happy that I said the right things. [laughs] And that I still felt the same way about pretty much everything.