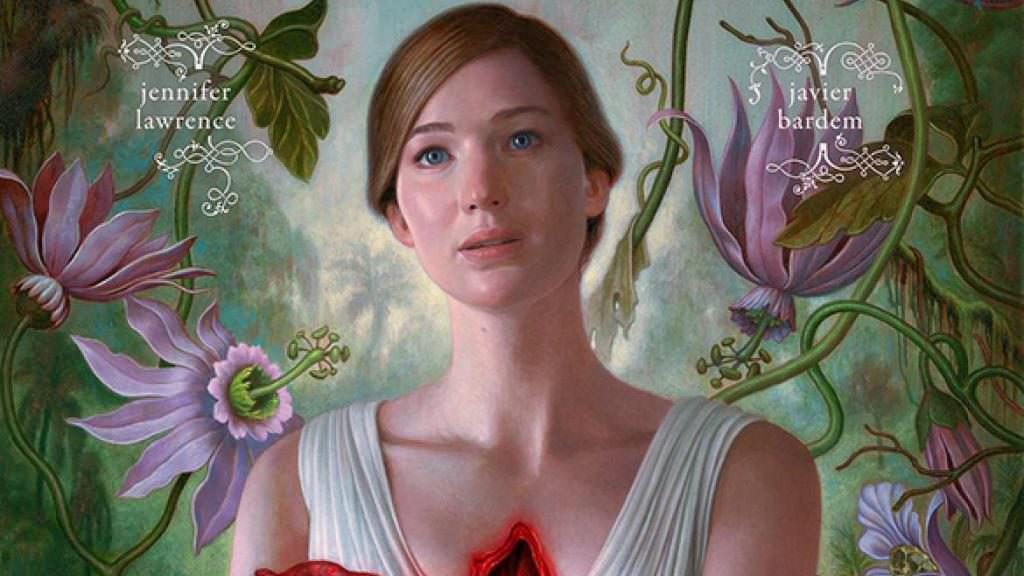 Yesterday we broke down the finer points of mother! and it’s biblically based inspiration. The point is to shock and provoke, but the plot is layered over a Judeo-Christian allegory. God and Earth, Adam and Eve, and Cain and Abel were all easy to spot, but as the plot progresses, the chaos makes it more difficult to recognize the allegory. Thanks to another day of musing (and prompting from eagle-eyes at Vulture) here are a few of the metaphors we missed.

Spoilers for mother! ahead.

Eden and the Apple: In the film, the poet covets a beautiful heart shaped crystal that would eclipse the Hope Diamond with light red veins running through. The story goes it was salvaged from the fire and is the poet’s prized possession. Of course, Eve charges for it at first opportunity, shows it to Adam and they break the crystal. They apologize, but it’s too late and God becomes enraged. Eve pouts like a petulant child and feels that apologizing should be enough to pay for their transgression. Of course, as the story goes, Adam and Eve hurry off to have sex. God boards up the study so that no one may ever enter it again, but the couple doesn’t have an interest in it at that point anyway.

The Mark of Cain: In the Bible, Abel’s spilled blood cursed the Earth. So, too, did the blood of the murdered son curse the hardwood floors in mother! Jennifer Lawrence did her best, but that one pesky spot just wouldn’t wash out. It corroded the floor and seeped into the basement and just seemed to keep growing. That’s a homeowner’s nightmare.

The Plague: A blink and you’ll miss it appearance of a frog made reference to the plagues of Egypt. Jennifer Lawrence is creeped out by the amphibian’s appearance when she’s exploring her own basement. Frogs were one of the plagues sent to Pharaoh to convince him to let the Hebrews go. Whether or not this is a Moses reference, the frog was one of the many plagues on mother’s home in the film.

The New Testament: The poet has a serious case of writer’s block for the first half of the film as chaos erupts around him. One mother conceives, however, he feels a burst of inspiration and writes something so moving that fans come from all over to worship him. Considering that inspiration struck after a baby was foretold, it’s a pretty safe bet that he had just penned the New Testament.

The Herald: Kristen Wiig’s character is named The Herald alluding to the angel who foretold the coming of Christ. She does do a pretty good job of hyping people up, but her demise is anything but angelic.

The Apocalypse: Once Mother’s newborn baby is devoured, she’s had enough. Racing down to the heart of the house that holds a giant furnace, Mother puts an end to it all. She pours gasoline and ignites the whole house. God is the only survivor, which sounds pretty much like the end of the world.

mother! is jam packed with religious references and there are plenty more to spot. Director Darren Aronofsky has stated that the film is a reflection of human destruction of the Earth. Definitely check out the film to see what else there is to unpack.