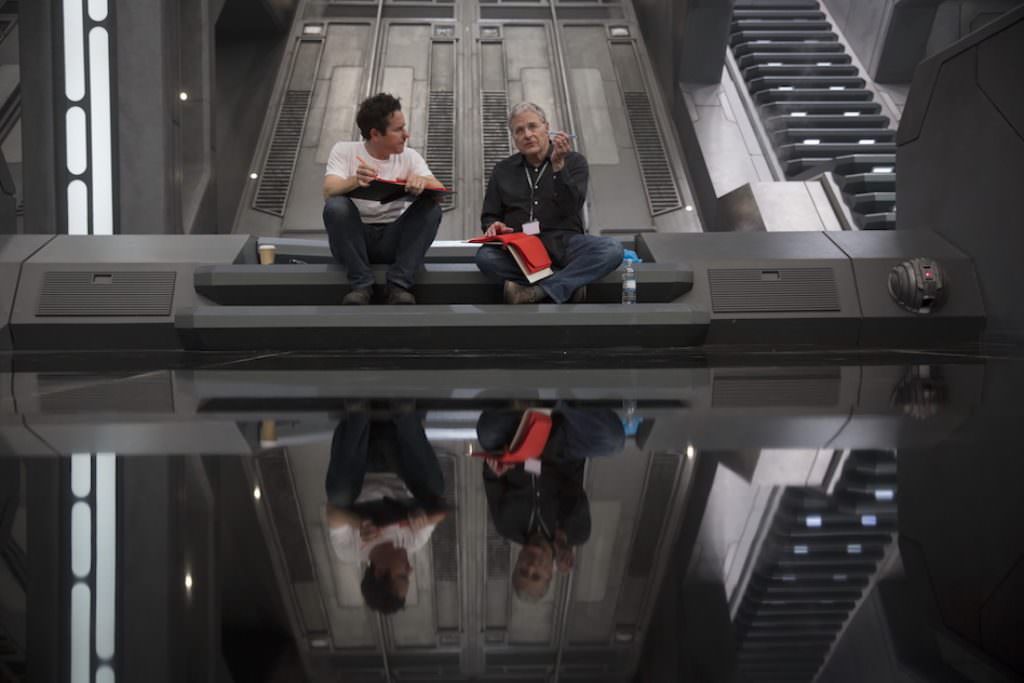 By far the biggest story in entertainment news today is J.J. Abrams return to co-write and direct Star Wars: Episode IX. Abrams will be co-writing the script with Oscar-winning Argo screenwriter Chris Terrio. The news comes about a week after the world found out that former Episode IX writer/director Colin Trevorrow left the project due to creative differences. The initial reports seemed to indicate that Star Wars: The Last Jedi writer/director Rian Johnson would step in, but considering Johnson is still putting the finishing touches on his installment, and Abrams already successfully launched the trilogy to begin with, today’s news is huge, but also not terribly surprising. It offers Lucasfilm president Kathleen Kennedy the chance to watch the new trilogy’s fresh heroes—Daisy Ridley’s Rey, John Boyega’s Finn, Oscar Isaac’s Poe Dameron, and Adam Driver’s Kylo Ren—have their stories wrapped up by the man who introduced them.

The decision also makes business sense. The Force Awakens was a critical and commerical smash, grossing more than $1 billion worldwide, and, crucially, creating an entire new generation of Star Wars fans around a cast of young, diverse characters. It cannot be understated how important it was that Abrams helped usher in new generation of Star Wars characters centered on a plucky, tough young woman in Rey, and surrounded her by a diverse cast that includes John Boyega in both a central role and as a potential love interest as Finn, the Guataemalan-American Oscar Isaac as the pilot Poe, and, despite being unrecognizable, Lupita Nyong’o as Maz Kanata. Abrams deserves a lot of credit for these casting choices, and the actors all stepped up and managed to shoulder the incredible burden of being Star Wars new stars with skill and grace. By tapping a filmmaker she has experience with, Kennedy has ensured that the final film in the new trilogy won’t be beset with personality clashes or potential, un-planned for costly re-shoots (there’s always some re-shooting on a film this size, however). No film, and certainly no franchise, bears quite the same burden as anything with the words Star Wars in front of it, and the fact that Abrams succeeded in launching the new trilogy speaks volumes, and aruably the only job more difficult might be ending it, so selecting him makes that much more sense.

Episode IX is due in theaters on May 24, 2019, and while that might seem like a long time off, in film production terms, especially for a movie this size, that’s basically tomorrow. Johnson was going to be busy supporting The Last Jedi until the end of this year (and perhaps beyond, depending upon the awards season push), so getting Abrams on board means they can dig into script writing, approvals and then pre-production that much sooner. The scripting portion, obviously crucial, is always something you want to leave a lot of time for, so by selecting Abrams and Terrio now, Kennedy has brought herself, and her two creators, a few extra months.

A lot of hay has been made over the recent turmoil in the Star Wars galaxy, with the departure of Phil Lord and Christoperh Miller from Han Solo, and Trevorrow departing Episode IX, as well as Gareth Edwards’ Rogue One getting into a spot of trouble and requiring a lot of extra work (and the help of Tony Gilroy). Yet despite these hiccups, the new generation ofStar Wars films have been massively successful, with both The Force Awakens and Rogue One earning plaudits and bundles of cash, and with Ron Howard taking over on Han Solo (and Stephen Daldry tapped for Obi-Wan), there may have been disturbances in the Force, but balance has been restored. Abrams is a proven storyteller and director, and hiring him allows Lucasfilm to take a breath and re-focus on the task at hand; ending the new trilogy the best possible way.

Will Abrams take more risks on Episode IX than he did on the very nimble, lively but, according to some critics, the less-than-daring Force Awakens? One critique of that film was that it played a little too similarly to the original Star Wars, and while that case can be made, it elides one major decision Abrams made; to put an end to arguably the most beloved Star Wars character of them all. With his focus on introducing the aforementioned, excellent new cast, Abrams’ lift on The Force Awakens was massive. With Episode IX, he doesn’t have to introduce a new generation of Star Wars fans to new characters, but rather satisfyingly wrap up their storylines, no small feat, but one that offers him plenty of opportunity for bold strokes. Rey’s lineage, Snoke’s origin, Kylo Ren’s further dive into (or emergence from) the Dark Side, the fate of the Jedi—there are a lot of questions Abrams will have the chance to answer. Will Episode IX be the end of a new trilogy, or, simply the end of the specific Skywalker saga? Abrams has long excelled at setting up mysteries, from Lost and Alias on TV to Cloverfield, Super 8 and The Force Awakens on the big screen—if he’s going to be answering questions in Episode IX rather than asking them, he’ll be writing and directing in a different mode.

It’ll also be interesting to see Abrams working off of Johnson’s The Last Jedi. They’ve essentially switched roles, from Johnson taking what Abrams did in The Force Awakens and using that as a launch pad for his film, Abrams will now have to absorb Johnson’s work and use it to inform where he takes the story. All reports coming out of Lucasfilm and Disney on The Last Jedi is that everyone is thrilled, which means Abrams will likely have a lot of momentum going into Episode IX.

May the Force be with him.