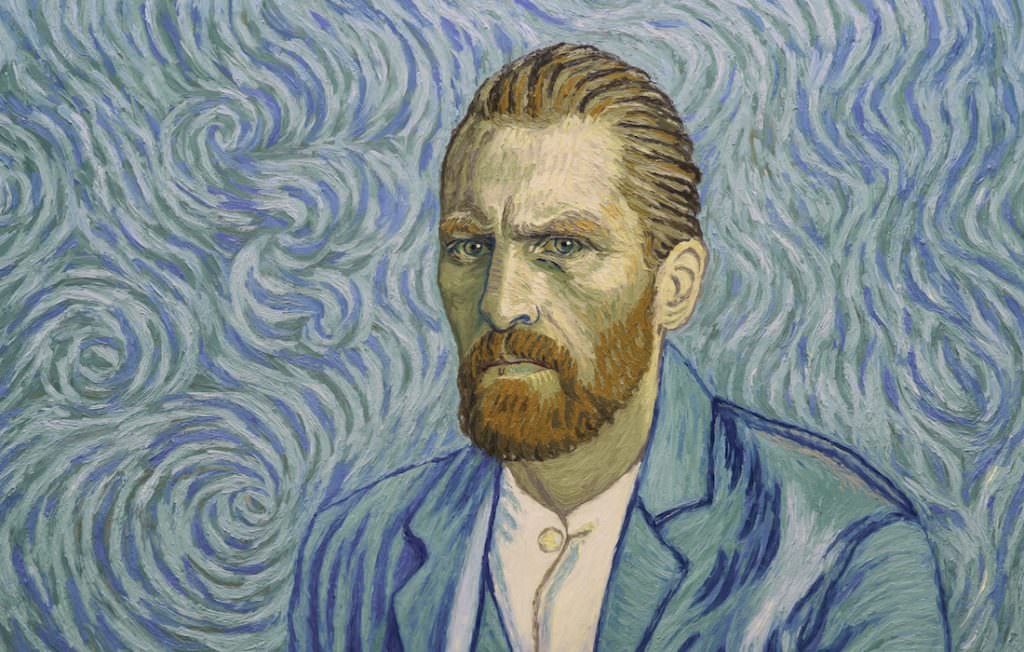 Every once in a while, a film comes along that profoundly alters how we perceive the images that flicker on the big screen. The animated biopic Loving Vincent , which recounts  the final weeks of  Dutch artist  Vincent Van Gogh’s life as a murder mystery, is definitely one of those game-changers. The Polish-U.K. co-production that opens Friday is the world’s first fully oil-painted feature. The project ,10 years in the making on a tight $5.5 million budget, was actually filmed twice , first as a live-action movie with actors before being re-shot frame by frame with painted canvases – 65,000 to be exact – created by 125 artists.

Loving Vincent starts in in 1891, where Armand (Douglas Booth) a postman’s son, tasked to deliver Van Gogh’s final letter to his beloved brother, Theo, in Paris. But eventually the story moves to the scenic village of Auvers-sur-Oise, where the painter would spend the final weeks of his life after dying from an apparently self-inflicted gunshot wound the year before at age 37.

But while Van Gogh was notoriously unlucky in love, his film turned into a matchmaker for its two now-married directors and co-writers – a detail you won’t find in the movie’s production notes. The bride? Dorota Kobiela, 38, a Polish-born maker of  animated shorts with a degree in fine arts. The groom?  Hugh Welchman, 42, the British-born producer of Welsh and Dutch descent and founder of BreakThru Films (whose 2008 animated short Peter & the Wolf won an Oscar). They are both making their feature debuts with Loving Vincent.  Below they discuss why they expanded what initially was a short into a feature, why Van Gogh still has a devoted following and how they cast such an unusual film.

Loving Vincent was originally supposed to be a short. How did you come up with the idea of animated hand-painted reproductions of Van Gogh’s works?

Kobiela:  I wanted to make painted animation and combine these two passions of mine. I looked at his paintings and they actually spoke to me in a very dramatic, cinematic way. And I felt they are able to present an artist’s work as he saw it and his own universe. It was very tempting for me. He wrote in his last letter to his brother, Theo, right before he died, “We cannot speak other than by our paintings.” I just found it very intriguing to try to do this painted animation and bring these paintings to life.

How did you end up joining forces on Loving Vincent?

Kobiela:  When it was planned as a short film. I applied for a public grant, which I was awarded but they make you wait three months. There is a gap between getting the money and starting the production. And I didn’t want to sit around doing nothing. They were looking for artists at BreakThru Films, where they were working on their second public project, Magic Piano, with Chopin music. That was stop-motion animation. I worked on concept art and was painting. And that’s how we met.

Welchman: Later, we fell in love and got married. And after we were married, we started working on Dorota’s film, Loving Vincent. I fell in love with Dorota and, after that, I fell in love with her project.  Unlike Dorota, who read Vincent’s letters when she was 16 and re-read them in her late 20s, that is what gave inspiration for the story, I just knew he had cut off his ear.

Kobiela:  He knew the basics.

Welchman: I knew very little. After I started reading about him and reading the letters, I was just blown away by the man. It is just an incredible story of passion.

When did you decide that Loving Vincent might be better as a full-length feature?

Welchman: I was going to lots of exhibitions, traveling around, going to all the museums. And, in every museum, there was always a sports scrummage around Vincent’s paintings. There are always the most people at his paintings. And I just thought, he is loved him so much, almost like a rock star, that we should do a feature film so more people would see it. The final factor was when I went to see an exhibition about his letters in London and there was a queue with a three-and-a-half-hour wait to get in. I said to Dorota, “People only queue up for three and a half hours for sporting events and rock concerts. We have to do this as a feature.” And she agreed. We knew it would be a technical challenge. But to be honest, all animation is made frame by frame. It’s not a huge difference. Ours was slower, but it was about 15 percent slower. It was a world we were already accustomed to.

Dorota, you read Vincent’s letters long before you ever thought about making a movie.

Kobiela: The first book I read when I was 16, the letters were all written to his brother. Then I read four or five master theses when I was 20. They were about the relationship between mental illness and artists. After that, I read more letters, between him and Paul Gauguin and to the rest of his family. To Theo, there are 820 letters. And he kept every single one.

I also think Van Gogh and his works are uniquely suited to being used in this way. He pours his own emotions onto his canvases in a very modern way. His brushstrokes make it feel as if they are already moving.  He had a better relationship with his easels than he did with people, who often rejected him.

Welchman:  His work is already moving when you just stand there looking at them. That was very much why he was a great artist. He had much to say that he couldn’t say to people. He couldn’t have love relationships. Even with his brother, they found it difficult to live together. And Theo didn’t like spending time with him. He loved him more than anyone else. And he still found him difficult. Poor Vincent had this huge heart and he wanted to communicate with people. And he did it with his art.

I never thought there was much mystery over his suicide. But the fact they never found the gun or his painting gear in the field where the shooting took place is interesting. You sort of leave it up to the viewer to decide what happened.

Kobiela: The gossip started just after his death in the village of Arles. Emile Bernard, also a Post-Impressionist painter, wrote a piece that was a romantic version of the truth. But it is not necessarily true because no one really saw what happened.

Welchman: He wrote an account and published it. That became the version that you pretty much see in the film Lust for Life. You also had Artaud, the theater revolutionary who writes an article that says society killed Vincent. By the 1950s, you have this overwhelming tragic death scenario. It overlooks the fact that there are lots of holes in the narrative of what happened that day. And the accidental shooting by local boys actually fits quite well those holes.

You had to audition quite a few artists to find those who could emulate Van Gogh’s style and create the thousands of frames needed for the animation.

Kobiela:  About 5,000 filled out the application. We looked through portfolios and based on that, we had 500 people audition. The audition was painting a frame. We had 125, including those who did one shot, for example, and worked for two weeks. But the major core team was 55 people.

You are very smart to use The Starry Night to start and end the film, since I think that has become Van Gogh’s best-known work. That is partly thanks to singer/songwriter Don McLean’s song Starry Starry Night as well. I kept hoping you would use that song – and you did, during the end credits. But what is really impressive is that you got Clint Mansell to compose your score.

Welchman: He is our hero. We were happy when he said yes.

It is interesting that the cast mostly features British and Irish actors. It probably wouldn’t have worked if you had performers speaking in French accents, even though most of the film is set in France.

Welchman: We thought about doing the film in French, but neither of us speak French. So we decided early on we would use English.  In France at that time, they had very strong regional accents. When Vincent was living in Arles, he didn’t understand the locals even though he obviously spoke fluent French. So that’s why we decided to have strong regional accents. In Arles, which is north, everyone speaks in a Yorkshire accent. And, in the south, everyone speaks with a southern accent apart from the Irish. The posh people speak like posh people. Dr. Gachet speaks like a middle-class man.

When casting the actors, did it bother them that their appearance would be manipulated so much?

Kobiela:  No, they loved it.

Welchman:  That’s why they wanted to do it. They saw our test footage and I think they liked the script, but they also wanted to see what they would look like as background paintings. They were all very supportive and interested in the style.

You do have some well-known names. Chris O’Dowd for one as the postman and Saoirse Ronan as Dr. Gachet’s pianist daughter, Marguerite. She just might be Oscar-nominated for a third time for her role in Lady Bird.

Welchman:  When we met her, she had one Oscar nomination. Through the process, she got another.

Game of Thrones fans seem excited that Jerome Flynn, who is mercenary Bronn on the show, is playing Dr. Gachet, the subject of one of Van Gogh’s best-known pieces.

Kobiela. I didn’t know he was from Game of Thrones. I don’t watch it. For me, he just looked like Dr. Gachet. He’s such a good actor.

Welchman: With the Dr. Gachet portrait, Vincent said he wanted to capture the heart-broken expression of our time. And Jerome has this face that can portray something so melancholic and feel as if he lived a really, really tough life. And we were so lucky to find him.

Are you going to make another film using this technique?

Who will be your next artist?

Welchman (looking at Dorota): Her.