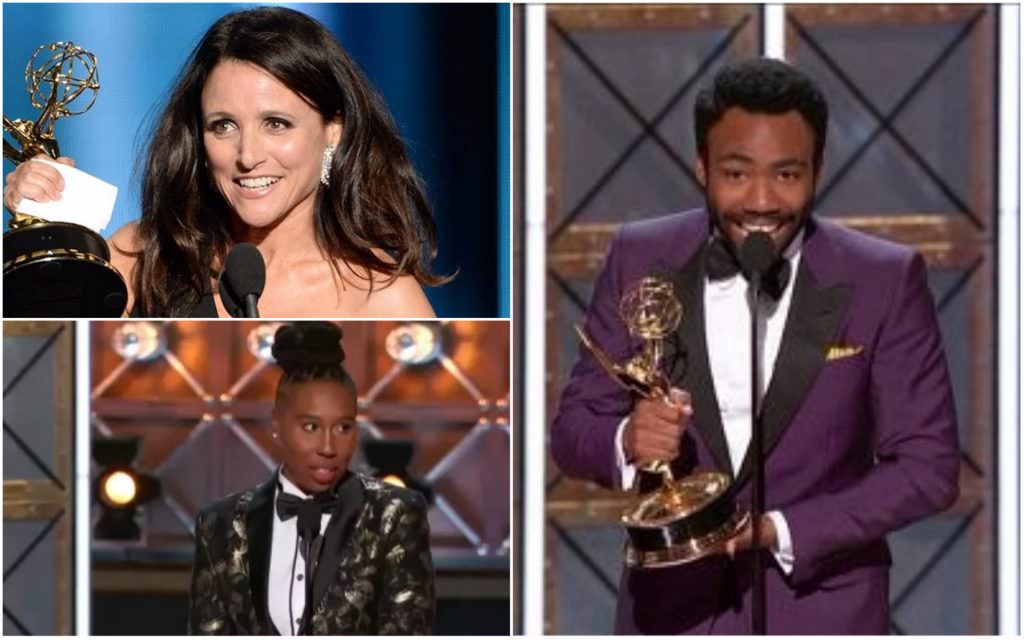 This year’s Emmy awards was one of the most exciting nights on television, and, as the show proved, there’s a ton of quality TV being made by a diverse group of talented storytellers.

Julia Louis-Dreyfuss broke the record for the most awards won by one actor for a single role. She is perfection as Selina Meyer in Veep, and has won for her portrayal six years running. The show also won for Outstanding Comedy Series, which is a real affirmation of the show’s consistent caliber. It’s very difficult for shows to maintain high quality writing and momentum for six seasons, but Louis-Dreyfuss is a true contemporary legend, and the team at Veep is as good as it gets.

Lena Waithe also had a historic win, becoming the first black woman to win a comedy writing Emmy for Master of None. The applause was so thunderous that she had to settle the crowd to avoid being played off stage prematurely. It’s good that they gave her time to speak because her remarks were the most endearing of the night.

Reed Morano was among the bevy of Handmaid’s Tale cast and crew to come out on top. She’s the first woman to win the Emmy for directing a drama in more than two decades. The show also won Outstanding Drama Series and scored three acting awards for Elisabeth Moss, Ann Dowd and Alexis Bledel.

The night’s biggest surprise was a win for Netflix’s Black Mirror as Outstanding Television Movie. The nominated episode San Junipero was a strikingly emotional exploration of true love and the afterlife. It’s proof that the show is intellectual, insightful, and can hit a lot of notes, not only sci-fi and horror.

Sterling K. Brown has been tearing it up with standout performances on This is Us, Amercian Crime Story, and will appear in Black Panther this winter. He became the first African American to win best actor in 19 years.

Donald Glover also hit the stage twice for directing and starring in Atlanta. Glover is the man of the moment, playing a young Lando in the Han Solo film and Simba in Disney’s live action adaptation of The Lion King.

Saturday Night Live also got recognition for the long-running show’s standout year. Kate McKinnon and Alec Baldwin both received performance Emmy’s and the show scored another Outstanding Variety Sketch Series win. This has been a peak in talent and content for a consistently high caliber series.

Those were some of our favorite moments, but here’s a list of the night’s nominees and winners:

TAGSAtlanta Master of None Veep