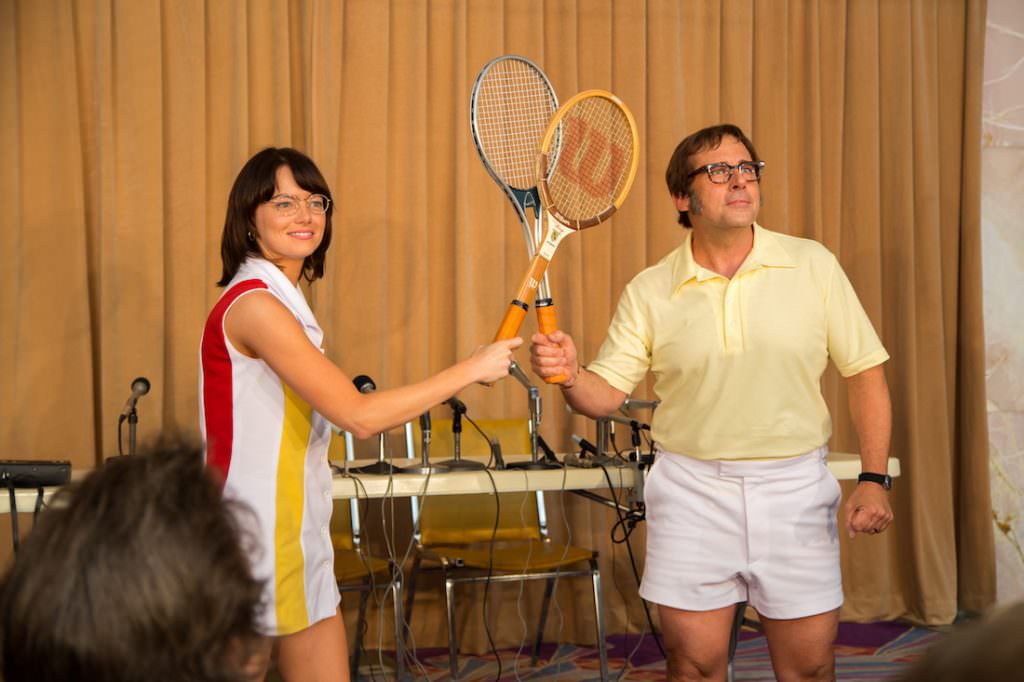 Californians Claim a Victory with Battle of the Sexes

Last week, we published our tennis obsessed correspondent David Thorpe’s fantastic interview with Battle of the Sexes editor Pamela Martin, about how Martin helped turned stars Emma Stone and Steve Carell into tennis stars Billie Jean King and Bobby Riggs. It took a village—including Martin, cinematographer Linus Sandgreen, and the visual effects company Lola—to turn Stone and Carell into their hard-hitting characters in their iconic tennis battle for the ages.

“We’ve never had that great tennis movie because it’s too hard to re-create,” Martin told us. “Of course, I was worried going in, How good is this going to be? Is this really going to work? Tennis is similar to dance. If I watch a dance movie, but I don’t see it wide, I don’t believe it. It’s a whole body sport. That’s how we’re used to watching tennis on television, and that’s what your eyes crave.”

Martin and the Battle of the Sexes Team pulled it off. The match between King and Riggs is incredible, a feat of seamless effects and stunt work, with directors Jonathan Dayton and Valerie Faris managing to re-create one of the most famous tennis matches in history, thanks to their aforementioned team and actors, with thrilling precision.

The success of Battle of the Sexes is more than just a technical one. While there could only be one winner in the match between Stone’s Billie Jean King and Carell’s Bobby Riggs in their iconic battle on the court– but off the court, there is more than one winner. Over 3,000 Californians took home more than $9 million in wages thanks to Battle of the Sexes production. The movie generated more than $25 million for the state – this money went to local businesses and in-state vendors such as caterers, dry cleaners, hotels, car rental companies, lumber companies, and more.

Battle of the Sexes (in theaters now) was filmed in California under the recently expanded state production incentive program. Thanks to this competitive program, the film and television industry is responsible for over 190,000 direct jobs with over $21 billion in wages in the state. Many locals play a vital part in bringing our favorite films and shows to life. Battle of the Sexes is a prime example of their impressive work.

While the film’s stars will receive most of the praise for their portrayals of the real-life tennis stars, our focus is primarily on those key below-the-line talents like Pamela Martin , Linus Sandgren and the rest of the team who, with a little bit of movie magic (which included vintage lenses to recreate the look of the original footage), were able to perfectly re-create an iconic moment in the 1970s. Yet the success of Battle of the Sexes was made possible by the thousands of Californians who worked tirelessly to bring us this great story on the big screen. You may not see their name in lights, but without them, the Battle would already have been lost.